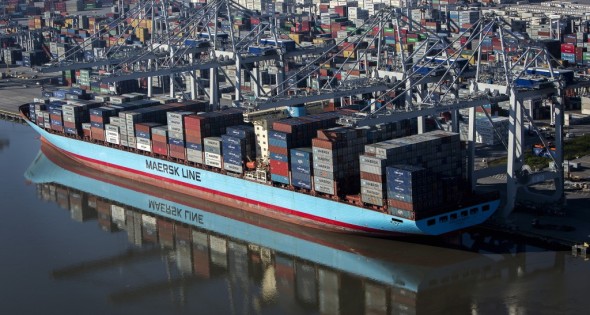 Caption: Container ships working at the Georgia Ports Authority Garden City Terminal in Savannah in October 2014. The Port of Savannah is No. 4 in terms of volume of containers and cargo. Photo: GPA Photo/Stephen B. Morton

“We’ve had several publications rank us as the best state in the country to do business over the last few years,” says Tom Croteau, deputy commissioner of global commerce for the Georgia Economic Development Department. “Some of the stuff isn’t always the sexiest stuff: it’s the basic things that you’re hitting the mark on.”

Some of those basics are widely available in the Southeast states, such as low unionization and low cost structure, and in the competition between the states, “Atlanta and Georgia come to the forefront because of the international airport,” he says.

“But it’s not just a business airport,” Croteau continues, explaining that the Hartsfield-Jackson Atlanta International Airport also enables Georgian citizens to vacation and visit their families around the world.

The alliance is formed by the cooperation of municipalities, economic development entities and businesses to “market the area as a package,” Jones says; he and Pogue both note logistics and distribution interest, such as DHL and FedEx, as well as perishable goods and medicines.

Rural areas of Georgia are not to be left out either. Meriwether County, southwest of Atlanta on I-85, has a growing industrial park. “We’re very proud of the park and the way it’s growing and progressing,” says Jane Fryer, executive director of the Meriwether County Industrial Development Authority.

“Mando is the largest employer in that park,” she says, explaining that Mando America Corp. has two brand new facilities and is getting ready to build a third facility in late 2015 within the park. The auto supplier will serve area automotive manufacturers including Kia.

Polk County “has a long history of producing successful industries out of our spec building program,” says Rachel Rowell, president and CEO of the Development Authority of Polk County. The county recently completed a 100,000-square-foot spec building in Cedartown, Ga., with room for expansion, and has two dual-rail served capable sites, which she calls “a rare commodity not only in Georgia, but also in the Southeast.”

Polk County’s three municipalities work together to better the community, with a plan called Blueprint Polk 2020. “We’re in the process of updating and revising this year,” Rowell says, explaining that several initiatives, including their College and Career Academy, have already been completed.

• The Port Tax Credit Bonus is available to qualifying Georgia companies that increase imports or exports through a Georgia port by at least 10 percent.

• Georgia’s Retraining Tax Credit, which equals up to half of direct training expenses of up to $500 per full-time employee per training program, is available to qualifying businesses retraining employees.

• The Investment Tax Credit, of 1 percent to 8 percent of qualified capital investments of at least $50,000, is available to qualifying manufacturing or telecommunications support companies that are upgrading or expanding.

Financial technology (FinTech), information security and health information technology are three thriving industries in Georgia, Croteau says. “The one that is really popping right now is FinTech.” He estimates that 70 percent of transactions processed in the U.S. come through Atlanta and about 90 percent of the industry is based in Atlanta, noting that the American Transaction Processing Coalition was formed there.

“We have some good, active projects in this industry as well,” Croteau notes. “Worldpay announced 595 jobs earlier this year, and Fiserv announced another net 500 jobs that they’re adding to the metro Atlanta area.

“We are the leading state in the nation with cybersecurity as well,” Croteau continues. “More than 25 percent of the world market share is generated by companies in Georgia,” he says of the state with more than 115 information security companies.

Information security is also big in Fort Gordon in Augusta, where the “federal government has enhanced their cybersecurity presence,” Croteau says. Taking advantage of that is Unisys Corp., which “announced 700 jobs in Augusta this year.” 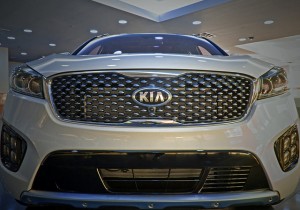 A Kia vehicle in the showroom at the West Point facility. Photo by Robert Payne

All three big industries benefit from the fiber Internet infrastructure, the data centers and the educated, young workforce. Google announced this year that they are investing $300 million to their infrastructure and data centers.

“We are also home to one of AT&T’s call centers employing over 250 people,” Rowell says of Polk County, just northwest of Atlanta.

“It’s sort of our default to talk about industrial development because it is so phenomenal in terms of what we’re seeing from companies coming in,” Croteau says, noting that automotive is a particularly hot topic.

“On the automotive front,” Rowell says, Polk County is home to “Jefferson Southern, a Tier I supplier to Honda.”

In Meriwether County’s industrial park, “it is mostly automotive suppliers,” Fryer says, explaining that the county is home to manufacturers of medical devices, auto bodies, ambulances and more. “We’d like to get some other type of manufacturing here, but that’s what we see because of our proximity to Kia.”

“Being a more rural community, we do have more agriculture space that provides a lot of the raw materials for industry in the region,” Rowell says of Polk County, noting Tip Top Poultry Inc. and Carlton Farms, “which is an agro tourism facility that brings a lot of school groups and weekend visitors to Polk County.”

“College Park has 32 hotels right now,” Jones says about the community of about 10 square miles which has one more hotel under construction. “Hospitality is kind of our bread and butter.”

“We’re going to have the first movie ranch in the state of Georgia,” Fryer says of spacious Meriwether County. Legacy Movie Ranch will be a place for movie companies to build sprawling outdoor sets.

Atlanta is experiencing net in-migration and has a young demographic, Croteau says. He attributes this in part to “a rebirth of residential coming back into the core of the city.”

Georgia Quick Start is available all over the state. “Our university system will meet with the employer […] and develop a curriculum and find out what individuals will need to fill those jobs,” Jones explains. “Then they provide that training for those employees so the new employer will have a good stream of employees to do that job.”

“Our industries often partner with Georgia Tech and Georgia Northwestern Technical College to create training programs tailored to their individual needs,” Rowell says. Polk County’s College and Career Academy trains both students and teachers in skills needed by local employers. “You have to get the teachers involved so they can get the students excited about manufacturing.”

“Georgia has a great transportation and logistics infrastructure,” Croteau says. “The Port of Savannah is No. 4 in terms of volume of containers and cargo,” he says, noting that it is growing fast.

The airport in Atlanta is connected to Savannah by about three hours of interstate driving, Pogue says — a strength for distribution and logistics companies.

Food processors and other heavy water-use companies “are attracted to Clayton County Water Authority’s sustainable practices,” Pogue says. The award-winning authority can produce up to 42 million gallons of potable water per day. 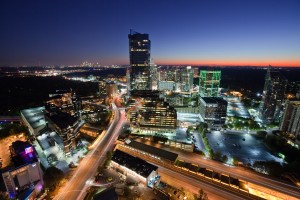 The airport in Atlanta is an asset for the whole state, and particularly for those in the Atlanta Aerotropolis Alliance. College Park owns about 350 acres of land adjacent to the airport that “can be developed for anything excluding residential,” Jones says.

That land is within a two hour flight of 80 percent of the U.S. population, he says, and it will be a tax allocation district (TAD) — other states call similar programming tax increment financing.

“Meriwether County is on I-85, 42 miles from the Atlanta airport,” Fryer explains. “We’re close enough to attract suppliers to Kia Motors.” Their industrial park is about 20 miles from the Kia site.

Polk County “has two active industrial parks: Rockmart 101 has several sites to choose from, including a couple with rail — and dual-rail-capable — options, and Cedartown North Business Park is home to our 100,000 square foot spec building,” Rowell says.

The Southeast states do compete with each other, and Georgia is one state that offers single sales factor apportionment when calculating taxable corporate income. “Even if other states are outrunning Georgia in the first few years, Georgia begins to leave other states behind in that analysis” after the SSF kicks in, Croteau says.

“On top of the valuable incentives from the state of Georgia, our community can offer an incentive program tailored to each company’s specific needs,” Rowell says. That program includes 100 percent Freeport tax exemption, no impact fees, grant assistance, property tax abatements and “collaborative government assistance to meet their speed-to-market requirements.”

The Martin Luther King Jr. National Historic Site in Atlanta has the boyhood home of the Rev. King, an annual contest for speaking about world peace in the “I Have a Dream” International World Peace Rose Garden, and a visitor’s center that explains the Civil Rights Movement.

Health care is prevalent even in rural Georgia.

“Floyd Polk Medical Center recently opened a 25-bed critical care facility and medical center in Polk County,” Rowell says. “What makes this one really special is we have a helipad.”

“The biggest medical facility we have here is part of the Roosevelt Warm Springs Institute,” Fryer says of Meriwether County, explaining that people with severe, often paralyzing injuries and wounded warriors come to recover at the facility.

“Probably the largest industry other than manufacturing is tourism,” Fryer says of Meriwether County, which is home to “one of the only covered bridges that’s still standing in this area,” and the Flint River, which offers rafting, canoeing and other water sports. Warm Springs is the home of Franklin Roosevelt’s Little White House.

“We are 12 minutes from downtown Atlanta,” Jones says of College Park, which is located not only adjacent to the airport, but along the MARTA light rail line.

The Atlanta BeltLine is a repurposed railroad structure inside the city that has been turned into about 22 miles of walkways that “have a lot of businesses growing along them,” Croteau says. “It’s a big thing for Atlantans to get out and connect with each other.”