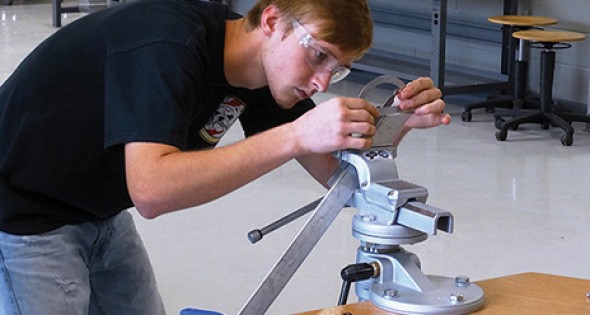 Stakeholders throughout the country are unrolling exceptional training programs.

The numbers tell the story. Manufacturing supports an estimated 17.6 million jobs in the United States—about one in six private-sector jobs. The National Association of Manufacturers says 12 million Americans are directly employed in manufacturing work.

The manufacturing industry has the potential for unlimited possibilities. Trends in the use of materials such as those used in additive manufacturing (3-D printing), carbon-fiber composites used in the lightweighting of automobiles, as well as hand-motion technology and more advanced robotic systems support the innovations of today and those not dreamed of yet. And then there is the “Internet of Things.”

“When it comes to manufacturing, expect to hear more about the Internet of Things,” says global futurist Jack Uldrich, who focuses on technologies impacting the manufacturing industry. “In its simplest form, the idea is that in the coming decade an estimated 50 billion physical objects will be connected to the Internet through low-cost, wireless sensors. What makes the technology so potentially revolutionary is that some of the sensors will be nano-barcodes that can authenticate products (such as valuable pharmaceutical drugs) or nano-sensors that can read a host of information, including temperature, humidity and the level of exposure to oxygen, and then relay this information to manufacturers, distributors and customers to provide a complete history of the item.”

To keep up with the advances, manufacturing companies require highly skilled talent to design and engineer the products and operate the robotic equipment. The flip side of the industry’s future success is the continuation of the serious skills gap. Industry stakeholders such as national associations, educators, manufacturers and communities are placing an emphasis on STEM education, as well as luring more women to manufacturing careers.

Among the many initiatives underway to attract women to manufacturing careers is the partnership between The Manufacturing Institute and the Alcoa Foundation. They host STEP (Science, Technology, Engineering, and Production) Forward events to mentor and recognize women involved in the industry, while also leading research efforts to encourage more women to enter careers in manufacturing.

An initiative raising the profile of manufacturing careers among youth and parents is the annual Manufacturing Day (MFG Day), which is co-produced by several manufacturing-related associations and sponsored by many industry leaders. For one day each October, teachers, students, parents/influencers, and employers from throughout the country provide/take tours of plants, and participate in experiential and virtual activities, among many other activities.

In October 2015, more than 400,000 people participated in MFG Day events. The goal is to improve the public’s perception of manufacturing, which appears to be working. According to a follow-up survey conducted by Deliotte, 81 percent of students were found to be more convinced manufacturing provides careers that are both interesting and rewarding, and 71 percent are more likely to tell friends, family, parents or colleagues about manufacturing.

More importantly, 94 percent of participating manufacturers found there was value in participating in the event, and 88 percent are more likely to continue engaging with high schools and/or colleges in their areas.

Recruiting Students of All Ages

Collaborations and between industry companies, high schools and higher education partners continues to be a leading component for workforce training initiatives. Increasingly, middle schools are entering the training equation.

“We now have STEM programs in 18 of our intermediary and elementary schools — more than half of the schools in the county,” says Bill Martin, executive director, Greater Osceola Partnership, which markets the Kissimmee, Florida region. Construction is underway on a $75 million high school that will be STEM based.

“We are the only county in the state that is providing additional funding to the school district expressly for STEM education,” Martin says. “We recognize that is where the needs will be in the future.”

“We also have a business retention and expansion program in place that focuses on topics in advanced manufacturing and food manufacturing,” says Helga Van Eckert, executive director, Flagler County Department of Economic Opportunity. “We meet with each of those groups to learn their concerns and issues so we can to stay on top of their needs when it comes to training and other points of concern.”

In Pasco County, Florida, a new manufacturing training program focused on juniors in high school may go deeper into the middle schools as the program expands. The county is one of three area counties offering apprenticeship training through the American Skills (AM Skills) Initiative, which is based on the German model of dual-enrollment apprenticeship programs. Students are sponsored by manufacturers, and the training can take up to six years to complete.

“When they are done with the apprenticeship program and the in-house skills training that they are doing they will be completely certified to work in high-tech manufacturing,” says John Walsh, interim president, Pasco Economic Development Council Inc. (Bill Cronin became president in January.) The county is part of the Tampa Bay metro, and is home to mostly small manufacturers that supply to companies in the metro, among other areas.

A tristate region anchored by Joplin, Missouri, is a manufacturing region where manufacturing firms make up the largest employment group in this border region of southwest Missouri, southeast Kansas and a portion of northern Oklahoma.

The region’s leading sectors include food processing, metal fabrication, power systems and transportation. The Missouri Center for Advanced Power Systems Technologies is a joint venture between Missouri Southern University, Eagle Picher Technologies, the Joplin chamber and the state of Missouri. The facility, which has been primarily used as a training facility, will begin to conducting research through partnerships with Missouri Science and Technology University.

Eagle Picher is expanding with a new state-of-the-art lithium ion center of excellence, which will open early this year, enabling the company to add other technologies to its mix. “The company makes power systems from the size of a pencil eraser that go into medical devices to products for space programs such as the Mars Rover, as well as communication satellites,” says Rob O’Brian, president, Joplin Regional Partnership. The company also works in grid-level storage systems for renewable energy.

O’Brian says the Joplin region offers an abundance of workforce training programs from organizations such as Pittsburg State University in Kansas, which has a focus on polymers, and four community colleges with strong manufacturing-based training programs. One of them, Crowder College in Neosho, Missouri, is working with the Joplin chamber to establish a new advanced manufacturing and welding center.

In Tomball, Texas, part of the Houston metro but located outside of the major traffic congestion, the traditional energy cluster is still prevalent. “For us, advanced manufacturing is a component of that,” says Kelly Violette, executive director, Tomball Economic Development Corp. She says companies in the oil and gas sector are taking traditional approaches and adding research and scientific components to develop more innovative products, offering more solution-based approaches.

A recent entrant to Tomball that fills this description is Packer’s Plus Energy Services, a Canada-based company, which is consolidating three facilities located throughout the Houston Beltway to a new U.S. headquarters operation at the Tomball’s business and technology park. Packer’s Plus will build in three phases, with a first phase 50,000-square-foot R&D facility.

Violette says a big part of the draw for Packer’s Plus to Tomball was the community’s focus on workforce development. “Part of that is the partnership with Lone Star College (part of a statewide system) and its energy and manufacturing institute, which is located two miles south of the city,” she says.

In Osceola County, nearly 100 partners, including the University of Central Florida (the nation’s second-largest university) and the Florida High Tech Corridor Council, are championing the Florida Advanced Manufacturing Research Center, which is expected to have a huge economic impact in the region. The $200 million facility is an industry-led initiative to conduct research on smart sensors. The center will be located at a 20-acre site, which will anchor a 250-acre business park.

“Smart sensors will be a huge movement, and a lot of people are comparing it to the invention of the Internet,” Martin says. “We have the Internet of Things that is anticipated to connect 50 billion devices around the world. We think the growth will be explosive in smart sensors as they are the basis of connecting all those devices.”

Osceola County has attracted the first private sector tenant for the research center, the Harris Corp., an international communications equipment systems company. A recent advanced manufacturing industry expansion announcement in the community is Photon-X, which located its headquarters to the county from Huntsville, Alabama. The company works in 3-D sensors and related technology, Martin says.

In Flagler County, millions of dollars of construction are underway at the Flagler County Airport, which will open up hundreds of acres to house manufacturing and corporate facilities. In fact, $50 million has been dedicated to fund the master-planned modifications, Van Eckert says, and close to $20 million has been spent. Aviation-based companies would have access to the runway for corporate airplanes. The airport features the Airport Commerce Center, which provides access to Interstate 95 and is close to Highway 1.

Flagler County’s officials also support companies through a brownfields program, which is funded by a $600,000 grant from the EPA. “It allows us to go to sites and conduct the initial due diligence for entities looking to acquire property,” Van Eckert says.

County officials aim to diversify their economy which includes tapping into training efforts through its universities and public school systems. The county also has dark fiber and redundancy of Internet services, Van Eckert notes, which attracts new industries. One company to take advantage of this asset is CoastalCloud, which was recruited to the county and is undergoing rapid expansion. “Their tagline when recruiting talent is: Live at the Beach, Work in the Cloud,” Van Eckert says. “They have been able to attract talent from California and New York.”

Moving to Pasco County, medical device and aerospace manufacturing companies are prevalent in the county. Pall Aeropower, which was recently acquired by Danaher Corp., manufactures parts for the aerospace industry, and is the county’s largest employer with 600 jobs.

Walsh says economic development officials identified the area’s training needs, conducted research and found the best way to respond, purchasing machinery and recruiting instructors to support the AM Skills initiative. Many of the area’s manufacturers participate in the program and allow their employees to teach the students. “We are creating a strong partnership between the education system and the end users, the manufacturing community,” Walsh says.

Additionally, up to 50 percent of an apprentice’s training is offset through training funds. Economic developers are also working with legislators to encourage more companies to participate in the apprenticeship program by resolving liability issues such as with workers’ comp insurance, which are the result of students training in manufacturing facilities.

Walsh says the community supports manufacturing industry related initiatives. For instance, a portion of an Economic Development Trust Fund has been identified for workforce and manufacturing skills upgrades. The county’s voters passed a penny sales tax initiative where 20 percent of every penny the county collects goes into the trust fund, which is expected to generate more than $50 million during a 10-year period. “We were the first in Florida to pass the penny sales tax that included the economic development portion of it,” Walsh says. “It is my understanding that a number of communities in the state are looking to do that.”