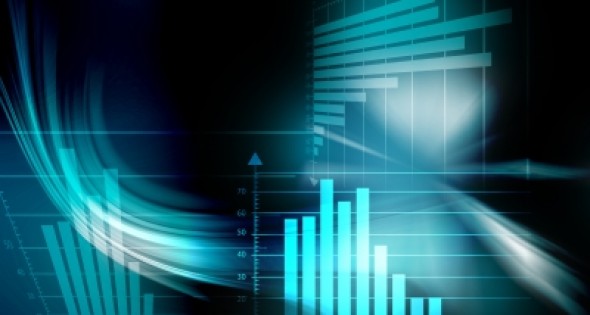 North Carolina’s legacy industries are alive and well, the economy has turned the corner from the downturn of a few years ago, and the future drive for prosperity has cleared the starting gate.
That outlook comes across loud and clear from the state’s leaders these days, as the drive to make the state more competitive hits high gear.
Gov. Pat McCrory has been focused on making North Carolina more competitive, says Sharon Decker, secretary, North Carolina Department of Commerce. One way that is being done is by the reorganization of the state’s funding mechanisms, Decker says, to create a single source for gaining information about funding projects. “We can move a lot faster in getting access to clients that are looking to get projects going in the state.”
The state also revamped their tax structure. North Carolina had some of the highest corporate and personal income taxes prior to a new tax reform initiative begun last year. “We have taken the corporate rate down to 6 percent this year, and will reduce it further to 5 percent in 2015,” Decker says. Personal tax rates are set to tumble as well, with various date markers on the way over the next two years based on revenue numbers. 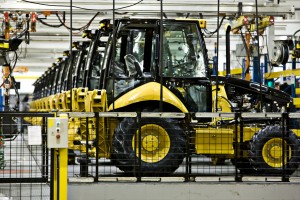 One of Caterpillar’s operations in North Carolina; this image shows the production line at the company’s Clayton, N.C. facility.
Photo: North Carolina Department of Commerce

Another way they are streamlining their economic rebound is by getting the word out about what the state offers. Legislation was recently passed that allows the commerce department to create a privatized sales and marketing function. House Bill 1031, known as the North Carolina Economic Development Partnership Modification bill, was created to privatize the economic development functions of the state Department of Commerce, and transfer those duties to the non-profit North Carolina Economic Development Partnership. “That organization is now in place and beginning operations,” Decker says.
Yet another focus of the governor is workforce development, with the announcement of a new initiative, NC Works, a collaborative between the state’s commerce department and the university and community college system, basically built off what was the North Carolina Division of Workforce Solutions. “The intention is to form a seamless way for employees that need work to get into the system and find employment with employers,” Decker says.
This will be a much more customer-focused approach to workforce development, she says. With this program, there are no longer unemployment offices, but NC Works career centers, which help connect the unemployed, those who are seeking jobs and employers looking for workers.
“It’s more than a name change,” Decker says. “It’s a change in how we are doing business. We have operated in silos too often in state government and the governor’s charge is to break down the silos.”

Down to Business
Governor Pat McCrory announced in October that North Carolina will lead the National Innovation Community, a coalition of 25 states and counting that will collaborate to bring innovative ideas and practices to government technology.

North Carolina features three of the top 10 emerging aerospace cluster markets in the South. More than 180 aerospace companies are engaged in manufacturing in North Carolina, employing more than 9,500 people.

Biotechnology, pharmaceutical and life sciences companies are flourishing in the state. In just ten years, the state has invested over a billion dollars in university research and facilities, worker training, incentives and infrastructure. North Carolina consistently ranks in the top 5 states for bioscience development.

Industries and Innovations
Food processing continues to grow and drive the economy in the state, creating opportunities for foreign investment. One such example is Smithfield Foods Inc., with five plants throughout the state. They are the makers of Eckrich, Farmland, Armour and other popular brands, and the largest pork processor and hog producer in the world with revenues of $13 billion in 2013.
Last May, the company announced a merger agreement with China’s Shuanghui International Holdings Ltd. to create a leading global pork enterprise. “The good news is that the world needs food,” Decker says. “And the technology is here, the experience is here and other countries need the processing capability that this state can provide.” 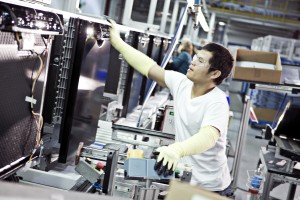 After years of decline, the furniture and wood-milling industry in the state is growing faster than ever, says Deborah Murray, executive director, Caldwell County Economic Development Commission. “We’ve seen some re-shoring and even seen some folks who have been in the lumber or wood products business that are really starting to grow as well,” she says.
One of the largest wood products suppliers for Home Depot, Idaho-based Woodgrain Millwork Inc., makers of doors, windows and moldings, just opened their new $8 million manufacturing facility in Lenoir. “So that is definitely in our wheelhouse,” Murray says. “We worked hard to bring them here, utilizing every tool we could.”
The facility already employs 90 people, with that number expected to double by next year.
Food processing is also one of the four industry clusters that are being developed through Carolinas Gateway Partnership, says John Gessaman, president and CEO of the partnership. The partnership is a public-private industrial recruitment agency serving eastern North Carolina.
A new company, Carolina Innovative Food Ingredients Inc. is in the process of building a $20 million facility near the Universal Leaf North America manufacturing facility in Nash County that will utilize the juice from sweet potatoes to develop a sweetener addition for food. Production is expected to begin in the first quarter of 2015.

Talent and Education
Decker says that another focus of workforce development is assisting with the employment of veterans that are coming out of the state’s military bases. “We think we can offer strategically significant talent as the armed forces downsizes,” she says. “We have over 18,000 men and women that come out of active duty in the state every year and we want to keep them here.” The governor enacted legislation that passed this last session that provides tuition to active military and veterans in the state through universities and community colleges.
That bill, SB 761, instructs the University of North Carolina and North Carolina Community College systems to develop programs that will convert military training into college credits and the state’s licensure boards into professional certifications and licenses.
The partnership’s Gessaman points to the Gateway Technology Center, an 18,676-square-foot facility opened in 2006 in the Rocky Mount area, located on the campus of North Carolina Wesleyan College and funded by a variety of both public and private organizations, with collaborations on engineering and business programs with East Carolina University and North Carolina State University. “So it’s kind of a unique partnership between a private college and a major public sector university,” Gessaman says. 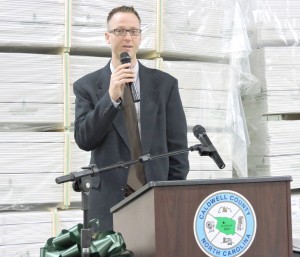 Assets
Decker says that another focus for the governor is infrastructure, with improvements in the ports, in roads, and in the work to connect rural areas of the state where a strong supply of workforce lives.
Along with that is the improvement of the communications infrastructure. Northeast Rural Broadband (NERB), working with turnkey construction company World Fiber Technologies Inc., recently completed the second phase of the $144 million Golden Leaf Rural Broadband Initiative (GLRBI) in northeast North Carolina. The first phase of the GLRBI was complete on April 27 last year, and included 904 total miles, of which 414 was new construction in western and southeastern North Carolina.
“Over the course of the last 15 or 20 years, the state has invested in a fiber loop that gives us the broadband loop through the center of the state, and allows us to now go the last mile very successfully in communications infrastructure,” Decker says. “So we really are working on the objective that there is no place in the state that is inaccessible from a communications standpoint. That allows people to have the lifestyle they want because they have the connectivity that they need.”
Industrial park development is underway at the Wilmington International Airport, where Jim Morton, finance director, says that the state has been really attracting aerospace development in recent years. The airport would like to line up some of those lighter manufacturing operations that are connected to aerospace. “We are also trying to pursue certification of workforce training programs to hopefully get all the people or the pieces in place to help with our recruiting of aerospace industry here,” Morton says.
The 150-acre parcel of land that they are developing at the airport would be ideal for building smaller parts for planes and jets. “Even if it’s a startup we could incubate them and have them grow to become a larger facility or manufacturer of parts for aerospace,” Morton says. The site could also be used as an office park, because the area is set to be shovel- ready. “For the last 10 years, we have been focused on the underground infrastructure to get it shovel-ready,” Morton says. “And we are there now. We have some good strong leads for companies that want to locate here but no one committed at this point.”

Outdoors and Recreation
In the Nantahala National Forest is a stretch of the Chattooga River, recognized for some of the southeast’s best whitewater and outstanding scenery, ranging from thundering falls and twisting rock-choked channels to narrow, cliff-enclosed deep pools.

Lifestyle
That interconnectivity of roads and access to communications is key to the in-migration state of North Carolina, where people want to live and work here, which in turn helps attract companies.
The quality of life — from moderate temperatures to the beaches to the mountains — keeps many of the 10 million residents in the state while the number of jobs in technology continues to increase. Along with retention of population, the state has had a population growth rate of nearly 19 percent between 2000 and 2010.
The workforce focus and pipeline access dominates the state’s economic growth picture. For example, North Carolina Community College System offers affordable, accessible programs through its 58-campus network that are within a 30-minute commute of 99 percent of the state’s population. The system is recognized nationally for its customized workforce training programs and offers a wide variety of occupational certification and continuing education programs.
Education and access to education, are the keys to the future of the state as it builds on reshoring legacy industries, broadens its manufacturing base, and opens the doors on emerging businesses that take advantage of the workforce pipeline developments that the state has created. “We are a manufacturing state and very proud of that,” Decker says. “And advanced manufacturing is a significant way that we are continue to come back out of this down economy.”