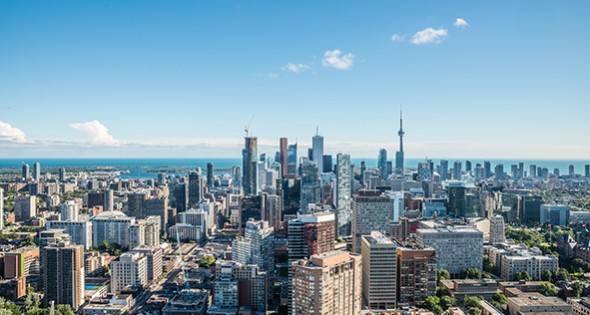 Ontario is located within a day’s drive of more than 40 percent of North America’s population. This central location, along with its competitive business costs and highly skilled workforce, make it attractive for industries of many kinds, including tourism, aerospace, automotive, chemical and biochemical, financial services, food and beverage manufacturing, life sciences, information technology and mining. Ontario’s economy is part of the $20-trillion NAFTA marketplace and has a $599 billion GDP.

Ontario is home to one of the largest manufacturing sectors in North America, making it one of the top economic leaders on the continent. The highly diversified economy includes the full range of advanced manufacturing, business services, renewable energy, life sciences, natural resources, research and development and more.

Ontario’s population of 13.8 million people accounts for one-third of the population of Canada. About 67 percent of Ontario residents between 25 and 64 have completed post-secondary schooling at one of the 20 public universities and 24 colleges located throughout the province.

Brampton is just northwest of Toronto and Toronto Pearson International Airport and the technology hub of Waterloo. “We have two [big projects]. One, we’re getting a new university […] and second we just built a new hospital,” says Bob Darling, director of economic development and culture for the City of Brampton.

The new university will be dedicated to science, technology, engineering and math (STEM) education. Many of Brampton’s young people leave to go to college and have not been returning, according to Darling.

The new university “provides us the opportunity for this homegrown talent to stay in our community,” Darling says; businesses in need of STEM talent will be able to find it in Brampton.

The economic development office has also reorganized to better facilitate the growth the city has been experiencing. “We’ve gone from being a generalist office where we basically dealt with all inquiries to where we now deal with [separate] sectors.” Each sector has its own manager and team.

The “expeditor” position will be the single point of contact for prospective businesses and “will work very closely with the applicant and their consultant to move the process through as quickly as possible,” Darling says.

Paul Aldunate is the expeditor of economic development and culture for the City of Brampton; he has already become an expert on the new hospital in Brampton.

The hospital is taking a new approach for Canadian facilities. It will have no overnight beds but will offer preventative care, urgent care, and outpatient surgeries. “That will attract other jobs that might have a relationship with healthcare and [might] develop a cluster,” he says.

Mississauga is southwest of Toronto, and it is now expanding its transportation options; the Mississauga Transit Way will connect Mississauga to transit in Toronto, explains Susan Amring, director of economic development for the City of Mississauga.

The light rail in Mississauga is also undergoing improvements starting in Lake Ontario and going north into Brampton, according to Amring. The project represents a $1.4 billion investment from Ontario. “It will connect our downtown and business district and help move employment throughout our area.”

Toronto Pearson International Airport is located within the city limits of Mississauga, as is one of the campuses of the University of Toronto.

The city has four target industry sectors: life sciences, information and communication technology, financial services, and advanced manufacturing, which, as Amring says, are “all in the knowledge-based economy.”

Mississauga is now working with a regional agency to promote foreign direct investment in the greater Toronto area, and has attracted many foreign companies already, including “over 100 Japanese companies.”

One of Mississauga’s post-secondary institutions, Sheridan College, offers “language training and preparation for newcomers to Canada,” says Amring. “We’re working to integrate as much as possible and as quickly as possible the talented individuals that come to our country.”

Biolab Farmacêutica, a Brazilian pharmaceutical company, is “setting up their first research and development facility outside of South America” in Mississauga as well, says Amring. It enhances their life science cluster that has seen large investments from Baylis Medical and AbCelex Technologies.