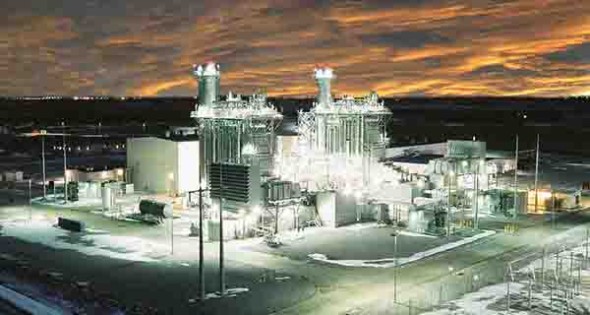 Marked by declining prices in many markets, the past year was a challenging one for utilities, especially regulated entities having to pay higher interest rates for loans to fund development and infrastructure projects.

As industry followers at PwC have recently observed, utilities also continue to grapple with the costs and complexities of maintaining their systems and a host of new challenges: rising cybersecurity threats; more demanding consumers; and, with the shift toward distributed generation, an increasing number of innovative competitors and the growing popularity of “behind the meter” (BTM) on-site generation sources, which could impact grid stability.

According to Moody’s Investor Service, the entire market is hampered by weaker demand growth due to a tepid economy and energy conservation efforts, though utilities with mostly gas-fired plants will fare better as costs decline for that fuel.

However, forecasts of long-term electric demand remain positive, thanks in part to an improving housing market. Furthermore, new technologies and initiatives are helping utilities optimize their operations and competitively position themselves despite tightening of government regulations.

In terms of fuel sources, the U.S. Energy Information Administration (EIA) estimates the share of total generation fueled by natural gas in 2016 to average 32.3 percent, with coal supplies remaining at 33.3 percent. They project generation share for natural gas falling to 31.5 percent in 2017 and coal’s share remaining unchanged, as generation from renewable energy sources increases. The EIA further forecasts that by 2017, residential electricity sales will increase by 2.4 percent, commercial sector sales by 1.2 percent and industrial sector sales by 1 percent.

“We’ve been facing low commodity prices lately, but the consensus is that while the oil boom on the east side of the state and into the Dakotas has slowed, it will resume,” says Rick Edwards, director of key accounts and economic development at NorthWestern Energy. “We’ve also got lots of manufacturing and distribution that’s doing well and incredible growth in the Big Sky area. We’re very optimistic and developing a community sustainable energy stakeholder group [that will be] looking at potential renewable projects within the state.”

A recent pilot project that Edwards showcases is one using a small micro-grid of solar photovoltaic panels and batteries to improve the reliability of service to electricity customers in rural areas. Located along Interstate 90, the project is also intended to help NorthWestern gauge the potential of solar generation in other rural areas across its service territory. 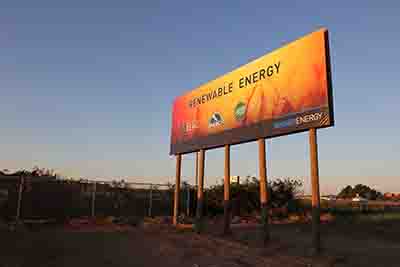 September 2015 dedication of the first solar array off I-70 near New Castle, Indiana. Photo by Ben Turner/Hoosier Energy.

“This is the first project of this kind in Montana and gives us the opportunity to test solar integration tied directly to the distribution system, serving multiple purposes,” said Curt Pohl, vice president of NorthWestern’s distribution division, in a company statement. “While the primary purpose of this system is to serve as back-up for the customers on this circuit tap, it will also produce renewable energy and give us the opportunity to test voltage support.”

Edwards says the $600,000 investment is part of NorthWestern’s $3 million commitment for community-based renewable energy projects statewide. With the addition of 11 hydroelectric facilities to NorthWestern’s generation portfolio, about 58 percent of the electricity the company supplies to its customers now comes from water or wind.

In South Carolina, adopting alternative sources─from natural gas to solar, offshore wind, and even nuclear─are a big priority at Santee Cooper, the state’s largest power producer and only state-owned electric and water utility. As the primary source of power to the state’s 20 electric cooperatives and 29 large industrial customers in 10 counties, the utility’s efforts also are yielding benefits to manufacturers either relocating or expanding in the state.

“Regulations are always a challenge for the utilities sector, but luckily, over the last 10 years, we’ve been planning and implementing a lot of the necessary strategies that will put us ahead of the game when it comes to the Clean Power Plan and other regulations,” says Annie Caggiano, senior project manager of economic development at Santee Cooper. “Companies in the region find that a competitive advantage.”

Caggiano suggests it’s because access to green energy is becoming almost a requirement for siting large projects. “Over the last two years, we’ve seen a definite trend of the corporations coming here–like Volvo Cars North America–wanting to be a good partner with local residents, and also a leader within the environmental and sustainability community. Making sure that there is some percentage of green energy that they can either purchase or that’s already within the generation mix helps them achieve that goal,” she says.

That approach is the basis for Santee Cooper teaming up with the South Carolina Electric Cooperatives to install the state’s largest solar farm. Located in Colleton County, the 3 megawatts (MW) array will provide insight into what impact large-scale alternative energy sources will have on the utility’s distribution system.

Modernizing and diversifying into alternative sources is also playing an increasing role in Indiana, where companies in a variety of sectors are tapping into lower energy costs offered by cooperative power providers.

“We offer the lowest electric wholesale rates in Indiana, which is a big plus, but we also provide flexibility and responsiveness for our community and industrial customers,” notes Chris Rettig, senior vice president of Indiana Municipal Power Agency (IMPA).

That’s a major boon for the state’s advanced manufacturing, transportation and logistics industries, as well as the unique industrial needs of companies like Nestle, Frito-Lay and Johns Manville, which have operations in the agency’s service area.

One of IMPA’s newest resources is the Prairie State Energy Campus, located in Washington County, Illinois, southeast of St. Louis. The campus includes a coal-fired generating plant and adjacent coal mine, generating 1,600 MWs of power, with 95 percent of the output already dedicated to eight Midwestern-based public power utilities.

Rettig says the complex features $1 billion in environmental emission controls, allowing it to meet and exceed federal and state environmental regulations, making it one of the cleanest, most-efficient coal plants in the country.

At Bloomington, Indiana-based Hoosier Energy, an emphasis on renewable power and cost-effectiveness are critical goals in serving rate payers.

“We don’t want to just develop projects for their own sake or buy energy at any cost. We’re pursuing good projects while providing reasonable rates for our end-users,” says Harold Gutzwiller, manager of key accounts and economic development at Hoosier Energy. “At the same time, while there’s no state-required renewable portfolio standard, we do have a board-adopted target of 10 percent renewables in our portfolio by 2025. Adding them to our gas and coal sources is part of our strategy to continue meeting all of our customer’s needs.”

In May 2015, the utility announced a 10 MW solar program to bring the benefits of solar power to members throughout southern Indiana and southeastern Illinois. Then in December, Hoosier Energy further expanded its renewable energy commitment by partnering with Harrison REMC to build a new 4,300-panel solar array. Located on 15 acres off Interstate 64, it is the third of 10 that Hoosier Energy is installing as part of an “all of the above” energy diversification strategy to provide 18 member distribution systems with additional energy sources, adds Gutzwiller.

Environmental consciousness, energy efficiency and supporting the growth of renewables in the marketplace are key values at the Wabash Valley Power Association, which serves the wholesale power needs of local distribution cooperatives throughout Indiana, Illinois and Missouri.

“The Clean Power Plan is creating some uncertainty—nobody really knows exactly how things are going to break—but it’s creating opportunities too,” says Brian Anderson, director of economic development at Wabash Valley Power Association. “We’re still trying to get a handle on where things are going to go, but we’ve always branded ourselves as deliberately different. It’s why we’re very interested in the new, potentially disruptive technologies that are rapidly coming to utility companies and consumers. We see growing interest in advanced battery storage, bio-digestion, self-generation and distributed generation.”

As far back as 2002, Wabash Valley began investing in landfill gas generation and now, with 15 plants and 47 MW of baseload capacity, leads the Midwest in landfill gas ownership. In addition, the group purchases local output from wind farms and biogas generators. Rather than incorporating these renewables into its own portfolio, the association sells the environmental attributes, facilitating others’ abilities to achieve their environmental goals.

Innovating for the Long Term

It’s a given that successful electric utilities provide relatively economical, safe and reliable power to their industrial, commercial and residential customers. But with economic volatility and a demanding regulatory environment coming to the forefront, thriving in today’s new realities will require adapting to what’s coming tomorrow.

For instance, in Nebraska, plans are in the works to convert an existing coal-fired boiler at Sheldon Station near Hallam, into one that uses clean-burning hydrogen at utility scale—a first for the state. The fuel will be produced by private equity-backed Monolith Materials as a co-product from its production of carbon black using low-cost natural gas as a feedstock.

The conversion is expected to result in 125 MW of electricity capacity for customers of the Nebraska Public Power District while reducing CO2 emissions by more than one million tons per year and increasing the district’s carbon-free generation to 46 percent—one of the lowest carbon-free footprints in the region. Groundbreaking and construction is slated to begin later this year, with completion of the conversion expected in 2019.

“What’s unique is that the firm chose Nebraska partly because of its public power model, which is centered around low-cost energy at a high reliability under long-term agreements, while being governed by a publicly-elected board,” says Mary Plettner, economic development manager at Nebraska Public Power District.

Plettner adds that the private, business-led solution has the potential to support several hundred new jobs and the attraction of new capital investment in the state, without being dependent on federal government grants or loan guarantees.

Industry watchers, such as Fidelity Investments, have estimated that by 2020, due to more stringent government regulations, as much as 8 percent of the coal-powered electricity supply in the United States will come off-line, the most significant shrinkage the industry has seen in many years.

Spurring this trend at the federal level is the EPA’s proposed Clean Power Plan which aims to significantly reduce carbon pollution from power plants. Although back in February the Supreme Court stayed implementation of the plan pending judicial review, the current implementation schedule require states to submit compliance plans by September of this year and ensure that their power plants reach CO2 performance targets by 2030.

Specific compliance measures will differ from state to state, but the plan is already accelerating the industry toward renewable energy, energy efficiency, and other low- or no-carbon emission alternatives.

“I think we’re in a really good position at IMPA, primarily because the generation we own is fairly new and well-equipped to handle most of the new regulatory changes,” says Indiana Municipal Power Agency’s Chris Rettig. “Our focus is on what the impact is going to be on our retail customers—the folks who are actually going to end up paying for the additional costs associated with these new requirements.”

“The EPA’s plan is probably the most burning issue among a lot of utilities out this way. Specifically in Montana—which is huge coal country—the plan calls for a 47 percent reduction in CO2 emissions for the state,” says Rick Edwards of NorthWestern Energy. “We have four plants that produce over 2,000 MW of coal-fired energy, so there’s a multitude of potential implications here, if it’s going to move forward.

“So as a utility, we’ve been spending a lot of time educating constituents and stakeholders on potential economic implications of the plan, especially in terms of rates and jobs, if there’s pressure for a shutdown of plants,” adds Edwards. “At the same time, we’ve got a lot of interest in pushing toward renewables, which include wind and, lately, more and more solar.”