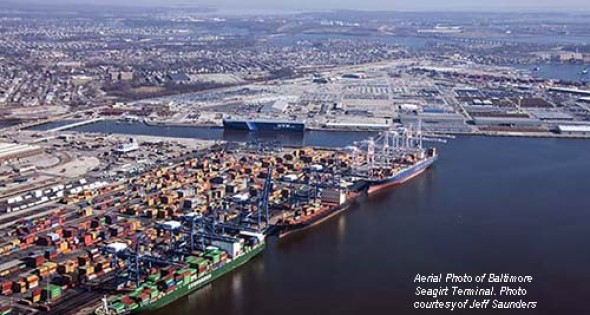 Seaports on the east, west and gulf coasts are getting ready for the opening of the expanded Panama Canal, slated to happen this summer after years of delays.

The promise of the expanded canal is that much larger ships will be delivering a greater variety and more tonnage of freight faster than ever before, transiting from the Pacific coast to destinations on the Atlantic coast.

The existing Panama Canal locks allow the passage of vessels that can carry up to 5,000 twenty foot equivalent units (TEU) containers – one TEU unit is equivalent to a standard shipping container, which is 20 feet long and 8 feet tall.

After the expansion, the new Panamax vessels, 1,200 feet long and 160 feet tall requiring nearly 50 feet of draught to safely travel, will be able to transit through the canal with up to 14,000 TEUs.

“All of the ports around the country have been spending a considerable amount of money deepening channels, buying bigger and more cranes and generally upgrading their facilities,” Jock O’Connell, an authority on logistics, world trade and global economic trends, says. “But they also have to worry about dealing with the unprecedented surges of cargo that these larger ships will bring in, which means that they have to better coordinate their relations with trucking companies and the railroads and highway infrastructure developers to be better able to expeditiously move cargo in and out of their ports.”

He says that making these fundamental changes can be challenging on the west coast especially, where this kind of development is constrained by environment regulations. “In California, we are looking at increasingly stringent air quality regulations to be imposed sometime later this year,” O’Connell says. “That will force ports to start adopting more emission control equipment from ship to shore and all the way to the various vehicles and other devices they use to move containers in and around the port terminals.”

One port on the west coast that is working to adjust to those challenges is the Port of Los Angeles.

Burlington Northern Santa Fe (BNSF) Railways wants to build a rail yard along the western border of Long Beach near the port of Los Angeles and unload ships more directly to rail. Right now, they have to truck containers to the Hobart Railyard in East Los Angeles, four miles southeast of downtown Los Angeles, which is the largest intermodal facility in the country at full capacity handling 1.5 million containers annually. “Transporting containers there adds to the regional air pollution and clogs up the freeway with truck traffic,” O’Connell says.

But there have been lawsuits about the proposed BSNF rail yard project, most centering around environmental concerns, which means that the project is basically dead, O’Connell says. “That project would have enabled the ports of both Los Angeles and Long Beach, and BNSF, to deal more expeditiously with the larger and larger volumes of cargo that would be trafficked through these ports,” he says. “And so now the major question is what’s next? What is BNSF going to do in order to provide better service to those two ports? At the moment, we don’t know.”

Infrastructure projects are also being developed at the Port of Stockton, California’s third largest port and a major inland deep water port located on the San Joaquin River. An $8 million project to create an underpass for the BNSF railroad was just completed there.

Another project close to completion is a 700 yard rail track improvement, which added 22,000 linear feet of track at a cost of $7.4 million. “Right now, with the existing customer base demand, the railroad at the port is running about 130 percent capacity,” Steve Escobar, deputy port director for real estate and port development, says. “So we needed that extra rail.”

They are at the early stages of another project, the Navy Bridge project, which is an adjustment to the bridge connecting their east and west terminals that currently has restricted height and weight capacity.

He says that the Army Corps of Engineers is also thinking of dredging the port to 40 feet from the current mean depth of 35 feet, at a cost of $140 million.

Over on the east coast, the Port of Baltimore is one of just three ports (Norfolk and Miami are the other two) that is ready now to handle the supersized ships that will be coming through the expanded canal.

Richard Scher, communications director for the Maryland Port Administration (MPA), says that the MPA executed a public private partnership agreement with Ports America Chesapeake, LLC (PAC) five years ago that allows PAC to run the day to day operations of the Seagirt Marine terminal, their primary container terminal and one of six public marine terminals. PAC will invest $500 million in the project and provide $140 million to the state fund for highway, bridge and tunnel projects near the port.

They are expecting the first ships from the expanded canal to reach Baltimore later this summer. “We don’t expect it to be a flood of large ships on an immediate day to day basis,” he says. “We think it’s going to be a gradual, slow growth because it does take the industry some time to adjust to large scale changes like this.”

Other preparations underway at the port include adjusting clearance in the 121-year-old Howard Street freight tunnel to handle double stacked shipments. “We have applied for federal funds for that project, which we hope will go forward because that is the final piece of the puzzle for being a top level container port today,” he says.

The good and bad of canal expansion

Even though predictions have been made that the Stockton port will experience a ten percent downward shift in business when the widened Panama Canal opens, Escobar thinks that their business will get stronger anyway. “Remember that some of those big ships that are going into Oakland and Long Beach and Los Angeles can’t get through even the expanded Panama Canal,” he says. “And if you look at the timing, those big ships can go to Los Angeles or Long Beach, cargo is put on rail and then can get to the east coast faster, sometimes ten days faster than cargo that goes through the Panama Canal, and then has to go all the way up the east coast.”

O’Connell says that when planning for expansion of a port, port management has to figure it out for themselves. “Port directors can’t just sit back and rent out space to terminal operators, who are then responsible for dealing with the shipping lines and hiring the labor,” he says. “The port directors themselves have to assume a new role, to try to quarterback or at least coordinate these various parties – the vessels, the trucks, the railroads – who are often in historically adversarial relations.”

O’Connell says that developers need to examine the longer term implications of updating or enhancing the capabilities of their ports. “You have to plan out for not just years but decades,” he says. “If you are spending tens of billions of dollars on new equipment or projects, you want to be pretty much assured that you will have some idea of what the future is going to look like.”

Krotz Springs, located inland on the Atchafalaya River, handles strictly barge traffic. They are located about 70 miles north of the Morgan City Port and close to Baton Rouge.

Six docks are being operated at Krotz Springs, where more than 200 employees work handling 3.1 million tons of cargo annually. “We are a niche port,” Gary Soileau, executive director for Krotz Springs Port, says.

One of the big projects that they are working on now, slated to break ground next spring, is the Hazelwood Energy Hub (HEH) project. HEH is a master planned regional energy hub company.

HEH is going to build a state-of-the-art oil storage and blending project at the port, making a parish-wide investment of $400 million, with a $145 million investment at the port to put in a dock and some above-ground storage.

“They are going to blend, store and then ship crude oil to refinery customers in the gulf region,” Soileau says. “And they are also going to utilize four salt dome facilities for additional storage.”

He says they will end up creating 123 jobs. “We are still in the permitting process but everything is moving ahead and we haven’t had any big problems,” he says.

All five of the ports are looking to increase business substantially with the opening of the canal. But there is more than just an increase in domestic freight.

The president of the Iberia Industrial Development Foundation, Mike Tarantino, says that all the gulf coast ports are going to be key in developing trade to South America and beyond.

He says that the focus at the Port of Iberia is the deepening of the channel there that provides access to the Gulf.

The Port of Iberia has been a gas and fabrication port where raw materials come in, get manufactured and repaired, then go back out. “I see in the future maybe container offload sites at that port,” Tarantino says. “Deep water ports like New Orleans and Houston accommodate ocean going container ships. But once those containers are broken down and transported along the coast, I could see the port of Iberia being a great place for loading and unloading fabrication supplies.”

The Southwest Louisiana Economic Development Alliance (SWLA), representing five parishes (or counties), has announced more than $97 billion in projects, with about $40 billion of that now underway, according to George Swift, SWLA president and CEO.

Most of those projects are dependent on the Calcasieu shipping channel, maintained by the Port of Lake Charles, which is the area’s deep water port about 30 miles inland from the Gulf of Mexico.

Many of the projects are for the construction of liquefied natural gas (LNG) facilities for huge energy companies such as Cheniere Energy, now working on an $18 billion project; and Sasol, an energy and chemicals company, building a $9 billion ethane cracker unit.

The Port of Lake Charles is generally in the top 11th or 12th busiest port in the country, exporting LNG from Louisiana to the rest of the world. “We have had three LNG terminals there for many years, and they were built to import natural gas,” Swift says. “The world changed, the price of natural gas changed, and the discovery of Louisiana shale and the fracking process means we can now export gas and make it profitable,” he says.

“We are having an economic boom here that is going to be phenomenal,” Swift says.

Approximately 25,000 construction workers are expected to come in and build the LNG facilities with about 20,000 terminal workers to follow. “Our area is getting ready to grow like never before,” Swift says.

For more information about businesses and people in this article, visit: