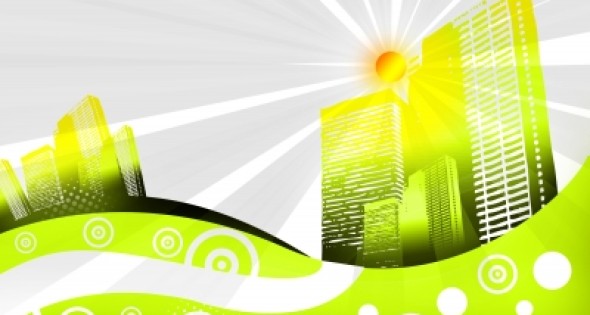 The Economics of Building Green

Make the time to determine better ways to use your building assets.

There are a variety of drivers motivating companies to implement green and sustainability initiatives in their buildings. These practices could match a company’s business model or they could be a way to reward employees with a better and healthier place to work. Or it could be as simple as the return on investment as a result of energy savings.

Before the economic downturn, green building was all the rage and gaining traction as a way to efficiently manage buildings. As the economy tanked and private sector investments dried up, government and infrastructure spending increased. “The U.S. government has had for a long time initiatives in place for sustainability, so during the downturn, while the entire industry went down, you saw a larger concentration of green because of the types of money that was being spent,” says Thomas Taylor, principal/founder of Vertegy LLC, based in St. Louis. The company works nationwide, and has several projects in the Middle East. The company consults on sustainable buildings and training for design, development, construction and facility operations.

Taylor says organizations now find themselves in positions to begin capital expenditures exploring green initiatives. “These are the people that feel safer and more institutional in thought,” Taylor says. “Or they are looking for a competitive edge in the marketplace so they are turning to sustainability in order to do those things. I don’t know if we are really seeing an uptick in the trend as gaining back to where it was.”

Business Xpansion Journal asked Taylor to detail what types of companies are investing in sustainable buildings, the challenges to executing sustainability measures, and what is on the horizon.

So the new mentality is to throw off the past and embrace the future in order to drive those types of savings or that level of sustainability. It is a challenge.

BXJ: What industries are making these investments?

Taylor: The industries spending money right now are heavy industry and distribution as opposed to the commercial sector. Many cities across the United States have a lot of vacancies. Commercial office buildings and speculative office buildings are still in a lull.

There is a renewed focus on sustainability in the manufacturing and distribution sectors and what that means to a business model. For example, we just finished a project with Volkswagen of America for a parts and distribution center in Lenoir City, Tenn. They see a benefit in the marketplace. Their customers, while they may not demand it, there is something that drives the company to side with those social issues or at least the public commentary they make by putting the effort into the building.

BXJ: What are the challenges in today’s sustainable marketplace?

Taylor: There is a fight we have with ourselves in throwing off past traditions and focusing on what could be in the future. We just started working with a potential client. One of the things they said in the interview is that the institution had been around for 100 years and they wanted to make their buildings 35 percent to 40 percent more energy efficient; however, the traditional way of delivering a building is sort of stuck.

So the new mentality is to throw off the past and embrace the future in order to drive those types of savings or that level of sustainability. It is a challenge.

BXJ: How do you motivate companies?

Taylor: The most important thing to do is to really get to know the client and find out what the motivation is behind their efforts. Maybe they want to advertise that they have a green building. Many times they want to grasp for things that are visible to the eye — whatever that may be — I haven’t been able to look at a sustainable building and say, ‘ah, there is a sustainable building.’

For other organizations it is all about energy or being able to measure energy. For some it is about how well the occupants of the buildings are going to embrace or feel that they have a special place.

Some institutions or companies are interested in sustainability and want to bring the buildings as far as they possibly can, but they are not willing to make any investment over their traditional initial thought processes of what this building is going to cost. In one case, an organization was looking for an 18 month or less payback period for the investment. So you build a payback model and bring it to the organization because that is what is important to them.

For some organizations, sustainable efforts might be on the social side. Then it is a matter of getting past the dollars and cents and find buildings that are good models for what you are trying to explain to them. This means taking field trips to other buildings to learn about initiatives such as daylighting, or the reduction of noise inside the built environment, for example.

BXJ: What does the future hold in regard to the implementation of sustainability measures in facilities?

Taylor: I would like to think as we move forward that we as a society are going to get smarter. I read a statistic that in 20 years we will still be using 80 percent of our existing building stock, which means fewer new buildings will be built. Hopefully we will see an emphasis on energy retrofits, and get more out of the investment that an institution has already made. In other words, tuning up your building and making sure it is running correctly.

One of the biggest problems we see in facilities is that people run their buildings in two modes: they are either working or they are broken.  Think about it. The only time a facility manager knows that something isn’t working right is when they get a complaint.

So until you get a compliant you don’t really know if the building is running correctly or not. They are not truly operating the building as an asset.

We hope to see more people viewing the building as an important asset in their investment portfolio, and with that, spending more time to determine better ways to use the asset than to just either run it or have it be broken.

The reuse of 32-acre brownfield site is breathing new life into its innovative past. This site, west of downtown Hamilton, once housed electronics labs for the Canadian Westinghouse Co., and was the location of many “firsts,” says Mark Stewart, marketing and leasing manager, McMaster Innovation Park. One achievement was the development of the Avro Arrow missile guidance system.

After these activities moved to another city, the site housed Camco, an appliance maker. Since 2006, with backing from the city, the province of Ontario and McMaster University, officials with the McMaster Innovation Park began adaptive reuse of the site, demolishing nearly 1 million square feet of warehouses and factories, leaving one building in place for renovation. The goal is to become an internationally recognized focal point of innovation based on research strengths at McMaster University, including nanotech, advanced materials manufacturing and life and health sciences.

“We cut out a large portion out of the middle of the remaining building, a 186,000-square-foot facility, to create an atrium,” Stewart says. “The building is a center for innovation featuring office space and wet and dry labs.” The building was recognized by the city of Hamilton for an adaptive reuse award.

In November 2010, the CANMET advanced metals laboratory opened, featuring 157,000-square-feet of lab and office space. The facility is LEED Platinum, and among its sustainable features is a solar thermal system. “When we overheat we send the water to our district energy plant to heat the building and the others around it,” Stewart says. “This is the only such system in Canada. When that is too much, we send the hot water to our ground source heat pump system.”

For complete details on the innovation park, visit www.mcmasterinnovationpark.ca.