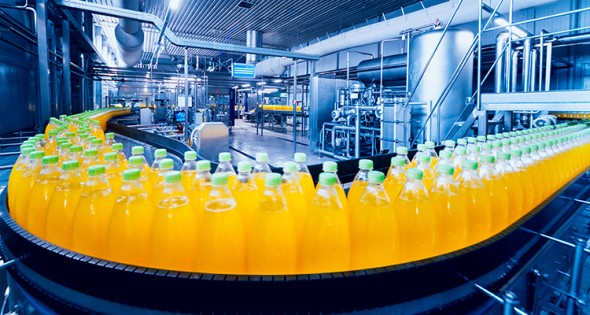 The food and beverage industry is making a strong a comeback 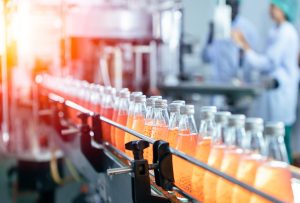 The food and beverage industry has been taking some serious economic hits over the last year. For example, Pepsico’s net income for the second quarter announced July 12 was down almost a billion dollars from the same time last year.

Tracking earnings and revenue for the food and beverage industry is tricky when the effects of the pandemic are factored in. There are many subsectors to consider. For example, companies that served the food service industry took some significant earnings hits in 2020. The revenue of one the biggest, Aramark, took a dive in 2021 to its lowest level since 2008.

But the U.S. healthcare/hospital food services subsector, featuring companies such as the Culinary Services Group, Metz Culinary Management, AVI Foodsystems, Inc. among others, is projected to reach $22.8 billion by 2026, up from $13.2 billion in 2021.

Most of the bigger food and beverage companies are doing alright today.

Tyson, one of the world’s largest food companies with brands including Jimmy Dean, Hillshire Farm, Ball Park, Wright, Aidells, ibp and State Fair, had a net income of $1.95 billion for the first half of 2022, more than double the $928 million from the same period last year.

The company is hoping to boost their productivity and help their bottom line, in part by launching a productivity program earlier this year designed to drive a better, faster and more agile organization supported by a culture of continuous improvement and faster decision making.

The company is targeting $1 billion in productivity savings by the end of fiscal 2024, and more than $400 million in fiscal 2022.

To meet their goals, Tyson management expects to realize capital expenditures of approximately $2 billion for fiscal 2022. Capital expenditures include spending for capacity expansion and utilization, plus automation to alleviate labor challenges and brand and product innovation, according to a company press release.

The company will increasingly use machines instead of people to debone chicken, one of its most labor-intensive jobs and a position with high turnover. 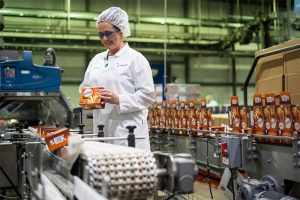 While the food and beverage industry continues to crank out new products and updates their manufacturing processes, there is still a nagging problem created by the pandemic.

According to the 2022 food and beverage industry outlook as presented by “Food Processing” magazine, an industry trade publication, the supply chain is stressed all through its length, from the container ships waiting offshore because they can’t be unloaded (an issue that is now substantially over), to the processed food that can’t be stored or shipped.

General Mills has experienced 500 to 600 supply chain disruptions a month over the last year, compared with 50 in a normal month. Long-haul truckers are in short supply across the U.S., contributing to supply-chain problems.

In 2021, supply chain disruptions cost the world an average of $184 million, with the U.S. topping the list with an average cost of $228 million, according to a logistics report.

The situation has gotten so bad that in late November, the Federal Trade Commission (FTC) ordered food and beverage makers including Tyson Foods, Kraft Heinz, Associated Wholesale Grocers, WalMart and others to detail the primary factors disrupting their ability to obtain, transport and distribute their products; the impact these disruptions are having in terms of delayed and canceled orders, increased costs and prices; the products, suppliers and inputs most affected; the steps the companies are taking to alleviate disruptions; and how they allocate products among their stores when they are in short supply.

The FTC also is requiring the companies to provide internal documents regarding the supply chain disruptions, including strategies related to supply chains; pricing; marketing and promotions; costs, profit margins and sales volumes; selection of suppliers and brands; and market shares.

But it’s not just supply chain. Food and beverage manufacturers and distributors need to stay focused on greater flexibility and agility to respond quickly, whether that is responding to changing customer expectations, government regulations, or fluctuations in the marketplace resulting from seasonal changes in eating and drinking patterns.

Companies have to increase the speed or decrease the lag time between when their products are made and when they are sold.

Another challenge to the industry is workforce. For example, as of October 2021, more than 130,000 consumer packaged goods jobs remained open, partly because manufacturing is just not seen as a primary career choice among a potential younger workforce.

During the pandemic, many food manufacturers accelerated their plans to automate some of the manufacturing processes to make up for missing workforce—and found that they liked it. Going forward, food manufacturers will bank more and more on automation to help them get to one of their main priorities: Productivity.

Managers responding to a survey by Packaging Machinery Manufacturers Institute (PMMI) noted that there are many automation solutions that are run as closed systems, meaning that end users are dependent on the supplier for technical support. Much of the current automation machinery is designed to do only one thing, and isn’t flexible enough to meet changing customer needs, according to survey respondents.

E-commerce innovation in package design, and the need to make packaging more eco-friendly, is driving that needed flexibility.

Better communication, or even new partnerships between manufacturing operations and the equipment makers, is a solution offered by respondents.

Another solution could be forming a sort of “machinery-as-a-service” option to help smaller companies deal with their automation needs on an issue by issue basis for their small scale production needs.

In the first seven months of 2021, construction activity in the manufacturing sector was up 40 percent over 2020, according to Dodge Data & Analytics, a construction projects tracker, with food and beverage being one of the three most active business areas in industrial construction right now.

Food Dive, a company tracking news and trends in the food industry, reported seven food and beverage facilities either completed or announced in both Missouri (including two Swift Prepared Foods facilities in Columbia and Moberly) and California; and 11 in Texas (including Frito Lay in Rosenberg and Tyson in Seguin).

Other projects announced in late 2021 include a $350 million investment by Platinum Crush for a new soybean crushing plant in Buena Vista County near Alta, Iowa. The plant will be built adjacent to the CN Railway, and is expected to be fully operational by March, 2024.

Koch Foods poultry processing company, the largest employer in Fairfield, Ohio, is planning to invest $220 million for a 400,000 square foot expansion on an 18 acre parcel which will include equipment upgrades on their processing facility. The company also estimates investment of $80 million in new machinery and equipment for the first phase of the project.

And Saline River Farms, LLC, a meat processing company, is planning to invest $87 million for the construction of an 83,000 square foot processing facility at Creal Springs, Illinois. They have recently received approval for the project.

Richard Worzel, a chartered financial analyst, futurist, and strategic planner who has worked with Coca Cola and Proctor and Gamble, among other large multinational corporation, outlined some of the major drivers of change that are going to affect customers and the grocery industry in tomorrow’s world.

One of those drivers is that food competes for “ground space.” Farmers who traditionally have made their money from the ‘three f’s’(food, feed, and fiber), now have three additional f’s to deal with: fuel, industrial feedstocks, and farmaceuticals.

Another driver: Rapidly rising food prices. The rise of the middle class in rapidly developing countries, like China and India, mean that many more people are eating many more calories per day. The result is a multiplication in the demand for food—and for more resource-intensive foods like meat and dairy products. The result, when combined with the competition for ground space, will be persistent increases in food prices.

A third driver: Assassin marketing. People have moved from a ‘push’ model of advertising based on cost-per-thousand advertising, to a ‘pull’ model based on the rise of social media. But the changes in marketing and advertising are nowhere near finished, according to Worzel. “As more is learned about the behavior of more consumers, and as the food and beverage industry figures out how they want to be served, then specific interests can be addressed in ways that have never been possible before.”

In a presentation he gave to a joint conference on the futures of farming and alternative fuels, Worzel said that the 21st century will come to be known as the Bioscience Century, when the promise of genetics, coupled with the use of computers to perform research, will transform what we do and how we do it. “Farming for industrial feedstocks and materials will become big business because it will be both more environmentally friendly, and more cost effective than traditional manufacturing,” he said. “Agribusiness will fill the plains and prairies with plants producing feedstock for plastics and monofilaments and nanotech materials for manufacturing, livestock for pharmaceuticals and vaccines, and ethanol for both car gas tanks and hydrogen production on a rapidly expanding scale. Traditional products, especially those made from petroleum feedstocks (such as seat foam and resin panels for cars from soybeans, or injection molded plastics using flax fibers for reinforcement instead of non-biodegradable fiberglass), will increasingly be made from bio-based products instead.”

Worzel said that there are great opportunities ahead in farming, both in alternative fuels, and agriculture generally—but only if farmers capitalize on them. “Alan Kay, one of the great technological visionaries of our time, once said that ‘the best way to predict the future is to invent it.’”