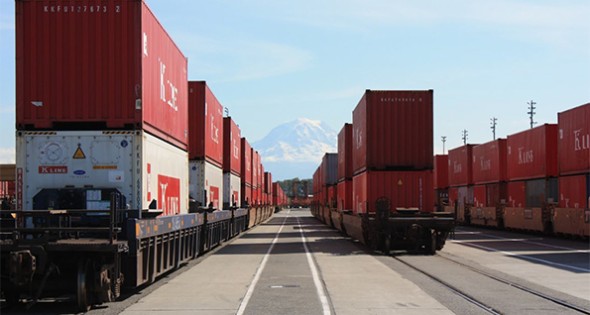 Intermodal distribution can be broken down into four simple steps.

Transfer goods from a port, choose a means of transporting it to its destination, unload it closest to its final destination gathering point, and re-arrange it to get it to where it will be sold to the consumer—which is commonly known as “the last mile,” and the part of the process that is experiencing the most disruption today.

But the whole intermodal system is experiencing a needed renaissance.

The physical intermodal interface is made up of trans-shipment of loading units, which are conventionally trans-shipped using gantry-cranes—a crane mounted on a structure that straddles a work area that can lift up to 900 tons and costs about $500,000— or reach-stackers—a sort of forklift on steroids that can lift, move and stack containers, and can lift up to 45 tons lbs. It can cost around $100,000.

According to a study published in the Journal of Transport Reviews, the operating characteristics of the rail terminal, such as operating hours, number of shifts, number of trains, arrival schedules, and the resulting impact on costs/handling, further complicate terminal operations. There is no set cost figure to work with, and no predictive analysis to help with forecasting.

The cost analysis offered by the study contributes to suggestions for cost reductions and/or quality improvements in order to increase the performance of intermodal rail transport (IRT).

As a process with many moving parts, intermodal distribution operations have struggled to get a handle on costs and predictive data analytics. However, little is known about the exact cost characteristics of differently sized IRTs and their usage. 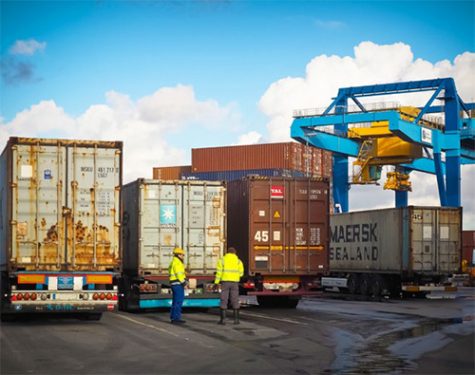 Looking for Ways to Reduce Costs

To attempt to become profitable, intermodal terminals have to find ways to reduce costs by changing the terminal design, work with local city or state government to get subsidies, offer extra services to generate extra sales that generate profits, and reduce terminal service quality without harming the core handling activity.

According to a report from the International Conference on City Logistics (ICCL), in many cases the number of intermodal terminals are scarce and their network scattered. Adding to that, investors are hesitant to get involved because of forecasting uncertainties.

In light of these issues, a new cost-efficient small-scale intermodal terminals (CESS) idea is being explored, consisting of the operational use of relatively novel trans-shipment technologies at terminal sites.

The ICCL report, “Intermodal Transport Cost Model and Intermodal Distribution in Urban Freight,” found that some of the underlying reasons for the inefficiency of conventional intermodal terminals include terminals designed for the heaviest semi-trailers and heavy containers that require large areas which need to be hardened for high axle loads; and that the majority of semi-trailers still cannot be transloaded using conventional trans-shipment technologies, i.e., there are not lift-on lift-off (LOLO) trailers.

Where electrified rail networks are employed, many terminals are not fully electrified, meaning that they require additional diesel driven shunting engines and time-consuming shunting movements to move cargo where track capacity is limited.

Industrial parks are also moving closer to the intermodal terminal, using that access for faster delivery of manufactured goods.

Intermodal Connectors to the Rescue

But probably the most compelling idea in intermodal development is intermodal connectors.

The National Highway System (NHS) Designation Act of 1995 (Public Law 104-59) directed the Secretary of Transportation to develop a list of intermodal connectors and submit it to Congress for approval. This inventory was completed in 1998 and approved by Congress as part of the Transportation Equity Act for the 21st Century, and intermodal connectors were constructed beginning in 2000.

NHS intermodal connectors are defined as “roads that provide access between major intermodal facilities and the other four subsystems making up the National Highway System.”

The number of port and rail connectors is likely to continue to increase as freight and supply chain trends indicate a continued increase in usage of intermodal containers for these modes.

The Association of American Railroads reported that approximately 9 million TEUs of port intermodal containerized traffic was moved by rail. It is estimated that roughly 36 million TEUs (80 percent) of the port international traffic use highway intermodal connectors between the port and inland locations in the U.S.

Why now for Intermodal Connectors?

The FHWA reports that this concept comes as a response to a number of factors, including continued globalization and increasing global consumer population; global manufacturing shifts, including near-shoring/resourcing; emergence of e-commerce fulfillment centers; new sources of domestic oil and gas; emerging use of liquefied natural gas as a marine transport fuel; and the Panama Canal expansion accelerating the use of ultra-large ships.

According to the FHWA, the volume of containers and trailers moved on the railroads annually has more than doubled since 2000, rising from about 6 million annually to nearly 13 million by 2013.

Rail intermodal traffic has increased by nearly 50 percent (roughly the same increase as containerized port traffic) since the initial designation of the NHS freight intermodal connectors.

It’s the truck-truck terminals that have emerged as a significant new terminal type since the initial NHS freight intermodal connector designation. These include warehouses and distribution centers that are used to deconsolidate, sort, store, classify, and consolidate shipments typically from multiple suppliers to multiple receivers.

The FHWA reports that these facilities also often shift cargo between 20-foot and 40-foot intermodal containers to longer 53-foot-over-the-road domestic trailers for medium and long-haul shipping. Many of these facilities are also located near ports and intermodal rail yards and serve as an extension to larger national and international supply chains.

The future of intermodal connectors

Access and use of intermodal connectors continues to grow, but there is much to do. The FHWA estimated improvements to the connector network to cost around $6 billion, to fix bad pavement and allow for more capacity on congested connectors, and proposes several future research options to consider.

Companies looking for a community with convergence of air, rail, and interstates for a convenient place in which do to business need look no further than Warwick, Rhode Island.

Located in the heart of southern New England, Warwick is only an hour away from Boston, three hours from New York, and 10 minutes from Providence. Their award-winning development concept, City Centre Warwick, is transforming more than 100 acres surrounding T.F. Green International Airport into a pedestrian-friendly, transit-oriented “live/work/ play” community. City Centre capitalizes on Warwick’s role as host to the airport and proximity to Interstates 95 and 295 as well as the InterLink intermodal rail station, which is connected to the airport terminal and offers MBTA commuter rail service.

Special zoning for the area encourages high-density, multi-family developments within walking distance of the InterLink and airport, while tax stabilization agreements available for qualified projects make City Centre an attractive and feasible location for any number of industries. A market analysis has found that the area would support industries, including, but not limited to, foreign trade, education, financial companies, distribution and high-end manufacturing.

Warwick’s pro-business environment ensures developers and investors are treated like valued customers. Mayor Joseph J. Solomon, upon taking office, implemented policies that encourage an expedited regulatory environment. That effort is paying large dividends, resulting in the issuance of hundreds of new building permits, and tens of millions of dollars in new construction value.

This environment and their convenient location have recently attracted storied automaker Tesla, and Edge Fitness, an innovative health club brand, who chose Warwick as home to their first Rhode Island locations.

The City is also fast becoming a bio-medical hub. OrthoRI broke ground last year on the organization’s new medical office and surgery center. The facility is located next door to the global headquarters of BD’s Davol division, which includes a 120,000 square foot biotech research and development center, at Crossings Office Park. To enhance the site as a premier biomedical destination complex, the company is investing $22 million in renovations at the Crowne Plaza Hotel, located adjacent to the Crossings Office Park on the campus.

While new businesses are choosing Warwick as their home, existing businesses are also expanding and succeeding. Greenwood Credit Union, for example, has called Warwick home for 70 years and is completing construction of a new, 70,000 sf operations center directly across from its current location. In the same respect, iconic ice cream manufacturer Warwick Ice Cream is celebrating its 90th year in Warwick. Inskip AutoMall, a premium car dealership that’s part of the Penske Autogroup, has expanded operations to include leasing the 42,000 adjacent sf building. Renovations are presently underway.

From the highly-traveled Route 2 retail and commercial corridor, to smaller shopping centers and stand-alone buildings, Warwick offers many development and re-development opportunities for national and regional companies and small businesses alike thanks to our diversity of industries.

To learn more about how they can help your business succeed here in Warwick, please contact Russell Moore, Warwick’s coordinator of Tourism, Culture and Development, at (401) 921-9712 or email Russell.J.Moore@warwickri.com.