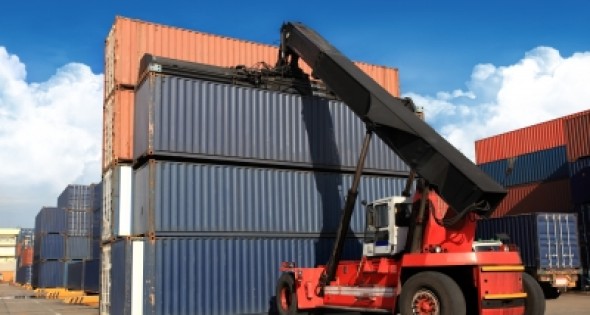 “Railroads are pushing and pushing to develop intermodal sites across the country,” says Tim Feemster, managing principal Foremost Quality Logistics, a supply chain consultancy based in Dallas. The results of the efforts are playing out throughout North America as regions position themselves as ideal multimodal logistics hubs equipped to provide solutions.
Rising costs of transportation, truck driver shortages, new hours of service, sustainability concerns around long-haul truck loads, and road congestion are creating challenges to finding capacity to move freight at a truckload level, Feemster says. “Intermodal is becoming a bigger component for a lot of companies in the supply chain than it has been in the past,” he says.
In addition to cost reductions, companies gain a significant reduction in their carbon footprints when deploying intermodal services. “Intermodal does have some elements of origin destination; they have to be close to ramps or it defeats the purpose,” Feemster adds.
Intermodal developments can be found in Dieppe, New Brunswick, Canada to the Midwest United States down to central Mexico.
Last year, Union Pacific moved its intermodal site out of El Paso, Texas, to nearby Santa Teresa, N.M. Union Pacific believes the location is a perfect site to create efficiencies. “And it does not matter that there are not that many people in Santa Teresa because they [UP] could justify the site by just the additional productivity they would have with the railroad itself,” Feemster says.

Godbout says the region has plans to expand its air cargo capability at the Greater Moncton International Airport, which is located in the Dieppe Industrial Park, to support some type of intermodal or free trade zone at the airport.

Moving back north to Dieppe, part of the Greater Moncton region, the community is known as the hub of Atlantic Canada because of its strategic location. At Dieppe Industrial Park, which features three development zones, Canadian National Railway Co.’s main line runs by the park, with rail spurs located throughout the park. “At the other end of the city is CN’s intermodal complex,” says Louis Godbout, director, ExpansionDieppe, which manages the land the city has for development, as well as the organization’s own developments.

Godbout says the region has plans to expand its air cargo capability at the Greater Moncton International Airport, which is located in the Dieppe Industrial Park, to support some type of intermodal or free trade zone at the airport.
“Analysis shows it is cheaper and faster to land goods here coming from Europe, Asia or elsewhere, and truck it to the states,” Godbout says. “Customs and duty offices in the U.S. are so busy and cluttered with a lot of freight going through, you can cross the border here within minutes, moving loads to the U.S. markets faster,” Godbout says. Dieppe’s officials are expanding their infrastructure capacity to serve the North American East Coast. And with the free trade agreement between Canada and the European Union, the effort will gain traction, he says.

In northern Mexico, transportation connectivity is key to the services provided by Amistad Industrial Developers. The proximity to the United States border is important for many of the companies located at Amistad’s developments and sites, where 95 percent of the products are sent back to the United States. “From the Monterrey [Nuevo Leon], and Saltillo [Coahuila] regions you are within a three-hour drive to the border,” says Marco Ramon, president of real estate, Amistad Industrial Developers. The company has 12 industrial parks and 10 industrial sites located throughout northern and central Mexico.
Organizations from around the globe find northern and central Mexico are ideal locations for automotive manufacturers and suppliers, logistics efforts, aerospace manufacturing, medical device manufacturing, the manufacture of HVAC equipment, the manufacture of consumer appliances and more.
Transportation infrastructure includes rail services by Kansas City Southern and Ferromex. Highway 57 spans from Saltillo up to Monterrey and then to the Nuevo Laredo (Tamaulipas) and Laredo (Texas) region, which is the largest port of entry into Mexico, Ramon says. “The closest port is in Tampico [Tamaulipas], which is on the East Coast of Mexico. We have companies that are importing materials, such as the resin companies, from European markets to Tampico and into Mexico.”

More Intermodals in the Works
In the Midwestern United States, officials at the Mid-America Intermodal Port in Quincy, Illinois, are completing the planning and design phase for an $80 million intermodal port project. More than $12 million in infrastructure investments have been made, including the addition of a $3.5 million rail spur. The site is within 10 miles of Interstate 72, 10 miles of the Chicago-Kansas City Expressway, and 10 miles of the Avenue of the Saints. The port is served by Norfolk Southern and BNSF; and it is the farthest north point on the Mississippi River. 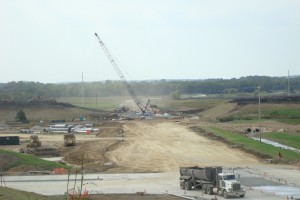 The realignment of Haskell Avenue in Lawrence, Kansas, supports the extension of the Southwest Lawrence Trafficway, which is a bypass of the city to Kansas Highway 10. Photo: Brady Pollington

Moving a few miles south in Illinois, the southwest region is part of a logistics initiative with the St. Louis region called the St. Louis Gateway. The bi-state region is poised for additional multimodal growth. The branding effort is to ensure decision makers involved with moving freight are aware of the region’s central location, and its multimodal transportation infrastructure, which includes six Class I rail lines, four interstates, three airports, and an ice-free river and port capability.

The Joplin region is well suited to support food processing and transportation equipment companies, which are able to tap services from nearly 80 machining and metal working companies, as well as companies involved in plastics, electronics and rubber products. The Joplin chamber markets communities in Missouri, Kansas and one in Oklahoma.

St. Louis Gateway is a partnership between Leadership Council Southwestern Illinois and the St. Louis Regional Chamber. Officials say the two states working together provide twice the leverage on major infrastructure projects, such as the new Stan Musial Veterans Memorial Bridge, which spans the Mississippi River in the region.

Moving south in the Midwest, the Greater Joplin, Missouri, region offers a comprehensive transportation infrastructure. Highlights include access to interstates 44 and 49; services by three Class I rail lines and two short line rail providers. “Missouri & Northern Arkansas Railroad acts to haul UP in this area,” says Rob O’Brian, president, Joplin Area Chamber of Commerce. “The line also provides access into Arkansas and up to Kansas City, and interconnects with UP, BNSF and KC Southern.”

The Joplin region is well suited to support food processing and transportation equipment companies, which are able to tap services from nearly 80 machining and metal working companies, as well as companies involved in plastics, electronics and rubber products.
The Joplin chamber markets communities in Missouri, Kansas and one in Oklahoma.
In Neosho, Missouri, officials are conducting a feasibility study for an intermodal facility with Kansas City Southern Rail access to Crowder Business Park. There is “no defined timeline at this point, but there is a growing demand for intermodal in our area and Crowder provides a good location to address that,” O’Brian notes.
The importance of the role of intermodal developments is also seen in another trend — that of trucking companies becoming intermodal businesses. Feemster says large trucking companies such as J.B. Hunt, Schneider, Swift and Warner are basically in the intermodal business these days. “In 2008, J.B. Hunt converted their long-haul trucking business to an intermodal business,” he says. “They moved to fifth place in revenue from first, but became a significantly more profitable company.”

“So many times people are focused on getting a cheap building that they put the distribution center in the wrong place. They spend more money on transportation then they saved on the building.” – Tim Feemster

Intermodal developments also support the formation of sustainable supply chains as it relates to long-haul trucking, Feemster notes. There are also fuel innovations on the truck side, such as CNG and LNG powered trucks. 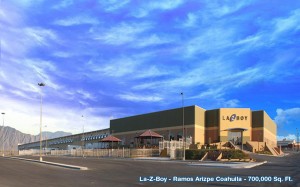 Focus on the Fundamentals
With all the innovations in the supply chain and various delivery methods, it is important not to lose sight of the critical components to deploying site selection strategies. In the retail world, the same day and next day delivery cycle is generating “what we call omni-channel networks from an innovation perspective but also become critical components in the supply chain,” Feemster says. In addition to omni-channel networks, retail is determining whether to have “a lot of distribution centers or storefronts.”
Siting for the supply chain is different than siting data centers or corporate headquarters. Feemster recommends looking at total costs as opposed to individual cost categories in a silo when making decisions. “From a supply chain perspective, transportation is more than 60 percent of the cost of the supply chain, and labor is next,” Feemster says. “You have to do those before you look at rents for buildings, which is typically less than 5 percent of the costs. So many times people are focused on getting a cheap building that they put the distribution center in the wrong place. They spend more money on transportation then they saved on the building.”
Community officials are geared up to support companies in finding the correct location. In Lawrence, Kansas, the city has made a substantial investment at the new Lawrence VenturePark, a former fertilizer site which is almost completely done with the remediation process. The 200-acre park is located next to the East Hills Business Park. The extension of the South Lawrence Trafficway, which serves as a bypass of Lawrence to Kansas Highway 10 is huge for both industrial parks, and in some cases, for the Kansas City metro region, says Brady Pollington, vice president of economic development, Economic Development Corporation of Lawrence and Douglas County.
“When you look at transportation costs and labor costs to and from Topeka to the intermodal facility in Edgerton (south of the KC metro), and to and from Lawrence to the intermodal facility in Edgerton, we are competitive,” Pollington says. “Layer on top of that we can tap into the workforce from Kansas City and Topeka, basically from a 40-mile radius. We have a lot to offer companies that want to manufacture and distribute their products. Our land prices will be more competitive than what you will see in Kansas City.”

We want industries that will dovetail well with the workforce campus being developed in Lawrence.” The city and the EDC have a campus in the development phases.” – Brady Pollington 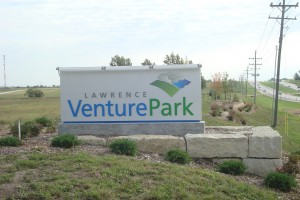 The Lawrence VenturePark is a 200-arce former fertilizer company site, which has undergone remediation and is ready to serve industry. Photo: Brady Pollington

“Lawrence VenturePark was designed for flexibility,” says Britt Crum-Cano, economic development coordinator, city of Lawrence. “We can split up lots or combine them.” The site is ideal for distribution and advanced manufacturing companies. “We want industries that will dovetail well with the workforce campus being developed in Lawrence,” Pollington says. “The city and the EDC have a campus in the development phases.” The Peaslee Technical Training Center and a college and career training center will open in August.
In Joplin, more than 6,000 people are employed in the trucking and transportation sector. The talent pool includes logistics managers, drivers and maintenance workers, O’Brian says. There are also a number of companies that provide services to the trucking industry.
The Joplin region has several industrial parks and sites in its inventory, including the Crossroads Industrial Park in Joplin and the Great Plains Industrial Park in Parsons, Kansas. Great Plains is a former military ammunition plant, which is in the first phase (1,000 acres) of development. When fully built out, the site will be more than 6,000 acres.
As companies find solutions to the challenges of moving freight faster and cost efficiently, officials in regions throughout North America are implementing transportation infrastructure and industrial park initiatives to ease the process.