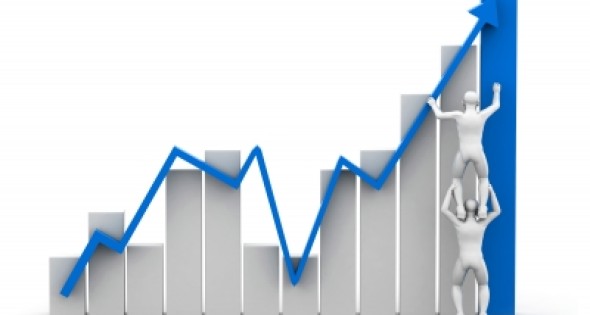 Ohio: Pushing Back From Uncertain Times

Ohio is a state that has pushed away the wreckage of the past economic struggles as economic development leaders have opened up the door to new opportunities and new methodologies for bringing back the economy in a strong, guided and targeted way that plays to its natural resources and legacy industry strengths.
One of the newest economic promoters in the state is the economic development organization JobsOhio, a private non-profit corporation begun in 2011 designed to drive job creation and new capital investment, and is now accelerating its influence in building up the targeted game-changers and growth opportunities that have captured the attention of business leaders globally: energy and shale, big data analytics, knowledge-intensive manufacturing, infrastructure investment and workforce.
Since JobsOhio started, a total of 641 companies have committed to create and retain 214,625 jobs and $10.4 billion in capital investment.
“Look at shale energy,” says John Minor, president and chief investment officer, JobsOhio.“The impact that we can have is significant when you start thinking of the potential downstream opportunities that come from this sector, and that is what we see as a driving force for us going forward.” 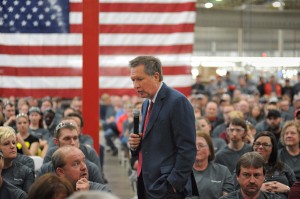 Ohio Gov. John R. Kasich addresses workers in Greenville after Whirlpool announced it selected its KitchenAid factory for an expansion that will bring 400 more jobs to the facility. Photo: Ohio Development Services Agency

These game-changing industries don’t have just vertical economic effect, but a horizontal development component as well, Minor says. “Shale doesn’t just impact the energy industry. It also impacts things like the petrochemical industry and the polymers industry as well. And when you think of big data, that impacts financial services and the health care field.”
Minor says that people are noticing Ohio, and his job is to highlight the state’s assets to continue to tweak their interests. “We have a great infrastructure with the rail service and the highway system and the ports and the Ohio river,” he says. “We have to find ways to really capitalize on those assets because that is going to provide us better opportunities and prospects going forward.”

Industries and Innovations
In Wayne County, in the northeast part of the state, agriculture bioscience is on the move, says Rodney Crider, president of the Wayne County Economic Development Council.
One company, Quasar Energy Group, uses an anaerobic digestion of not only farm related products but food waste and other waste items to generate electricity. Quasar has rebuilt and updated the city of Wooster’s 40-year-old sewage plant with three new digesters that turns sewage into methane gas. “We are looking at those businesses primarily because we are located near the Ohio State Agriculture Research and Development Center (OARDC),” Crider says. “So we are trying to connect the resources of that OARDC and the expertise there among the researchers to the private sector people.”
Piqua, in west central Ohio 30 miles north of Dayton, is where manufacturing is the backbone, says Justin Sommer, executive director of Grow Piqua Now and assistant city manager for development.
One of those, the Japan-based automotive manufacturer Nitto Denko Automotive Ohio Inc., is expanding its operations by 20,000 square feet.
There were four major expansions by other Piqua leading manufacturers beginning two years ago, including Hartzell Air Movement, Industry Products Company, Crayex Corp. and Industrial Spring Co. The total investment by these companies in new facilities, equipment and inventory was in excess of $15 million.
“I think our companies are able to take advantage of gaining additional market share from companies that did not do as well in the recession,” Sommer says. “So those that survived are in a good position to grow and are taking advantage of that.
“Plus, the low interest rate in the state doesn’t hurt when you are doing a new building expansion,” he continues. “So I think it’s a perfect storm of market conditions that allows us to be able to grow now.” 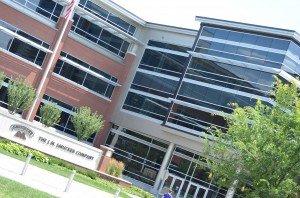 One of the major manufacturers in the Van Wert area, on the western edge of the state about 70 miles north of Piqua, is Advanced Biological Marketing (ABM), which recently announced the expansion of its production facility at its corporate headquarters in Van Wert.
In the past three years, ABM has had a significant increase in sales growth for its all-natural agricultural biological products. ABM is expanding their production facilities by 78,000 square feet during the next two years. This first phase of the project expansion will allow ABM to increase its current production capacity tenfold.
There are at least two other major multimillion dollar expansions for other companies in the area to be built in the city’s Vision Industrial Park, says Cynthia Leis, Van Wert’s economic development director. “Both of these companies are talking about expansions because they are just out of space and because of increased customer demands,” she says.
In Licking County, in the center of the state, Ascena Retail Group completed a $75 million expansion and relocation project in August, expanding their distribution center and adding an office complex. The facility was expanded by more than 500,000 square feet to include the expansion of the physical plant for the distribution component, as well as the installation of a logistics equipment office project, which includes back office accounting and finance operations.
“We want to continue to increase opportunities for STEM (Science, Technology, Engineering and Math) related and STEM-enabled manufacturing in our community,” says Dan Evers, economic development director for Licking County, “while also creating economic diversity in manufacturing, logistics and professional employment opportunities as well.”

Talent and Education
Evers says that STEM goal is aided by the fact that they are home to the Newark branch of Ohio State University, which is co-located with Central Ohio Technical College. Students can take courses toward other Ohio State degree programs, and then transition on to the Columbus campus. “The asset that those two institutions provide us is tremendous, with engineering technology coursework where students can secure associate’s degrees and be on a bachelor’s degree track in engineering technology fields, associate’s in engineering across a number of engineering disciplines, as well as a full slate of baccalaureate degrees available from Ohio State University,” Evers says.
At the OARDC in Wayne County, there have been a couple of innovative commercialization successes, Crider says. One of them is using the Russian dandelion roots to create latex that is then converted to rubber for the automotive tire industry. “There has been more demand for rubber car tires worldwide in China and India and other developing nations,” Crider says. “And the only source has been rubber trees. So it has been difficult to maintain the level of production from those that is needed. This would be a great alternative.”
To further capitalize on that innovative research, a group of organizations in Wayne County — the Wayne Economic Development Council, the Ohio State University Agricultural Technical Institute, The Common Good and the Employment and Training Connection/Ohio Means Jobs-Wayne County, joined now by the Tri-County Educational Service Center — launched the Workforce Innovation Network, or the WIN. “It’s primarily vocational education training, bringing them together with the private sector to work more closely,” Crider says.

Assets
Leis says that they are expanding the Vision Industrial Park by 60 acres. That particular expansion is being certified now for the food and beverage sector, she says. The park itself is about 70 percent full, with the remaining available acreage shovel ready now. Currently, Braun Industries, Kam Manufacturing, National Door and Trim and other light manufacturing and distribution companies are located in the park.
Leis says that the community’s economic home run right now is its 1,600-acre megasite, on the northeastern side of the city, with access to the Midwest infrastructure, a rail spur and access to a regional airport within a mile. The certification for that site is about 99 percent complete now. “It is intended to be for one large end-user, like an automotive manufacturing operation, with other sites nearby that would be ideal for suppliers to that end user,” Leis says.
The city of Green, in northeast Ohio between Akron and Canton, just opened up a new phase of their industrial park, says Jessica Hyser, community development administrator for Green.
The park was started 20 years ago, and designed in two phases. “We have seen the success of the two phases and wanted to expand that into a third phase,” Hyser says. “It’s land that is actually owned by the Akron County Airport.” They opened up 140 developable building acres there, she says, and are working with more industrial-type companies, along with flexible office space type users.
The Clinton County Port Authority owns and operates the Wilmington Air Park, which is a former DHL North American hub for express package delivery. The port authority promotes the air park, leases space and operates a local revolving loan fund, among other initiatives.
DHL, as well as Airborne Express before it, installed an enormous amount of infrastructure and facilities. The air park is located off of Interstate 71 between Columbus and Cincinnati, and in proximity to Dayton. 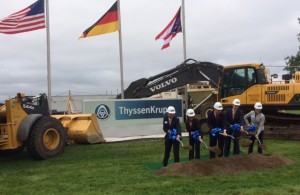 The air park features two parallel runways that are capable of simultaneous operations. “We have a significant amount of square footage of what I would call industrial grade buildings,” says Kevin Carver, executive director, Clinton County Port Authority. “One available building is 1.1 million square feet, sits on the edge of the taxiway, and is designed for air cargo operations. There are not a lot of empty 1 million square foot buildings, certainly not in this part of the country.”
Carver says additions to the air park in the summer of 2014 included Airborne Maintenance and Engineering Services (AMES), and Santa Rosa Systems. AMES is a primary tenant at the park, with a new $15 million, 105,000-square-foot commercial maintenance and repair hangar. The company can perform services on large aircraft such as the Boeing 777.

Lifestyle
Crider says the community hired an economist to conduct an economic analysis of the Wayne County area and was surprised to find out that they still had a growing population. “Most counties in Ohio are declining in population — not only here but across the Midwest,” Crider says.
Sommer says that Piqua city developers are making investments in adding bike lanes to their roadways as they repave them throughout the city. The city is already at the northern point of the largest paved bike path in the United States, with more than 330 miles of paved bike paths. They are also making substantial investments in their water treatment and waste water treatment over the next few years so heavy water users — such as data centers — would be a good fit for their location, he says.
Sommer says one of the community’s goals is to grow its population, a goal that is echoed by other economic developers in Ohio. “That means making investments as a city, making investments in hard assets, that we think will attract the kind of workforce that our employers need,” Sommer says.
The new economic momentum from organizations like JobsOhio has begun to shine a light on the state as never before. The last two years have clearly demonstrated the success of the JobsOhio model. But there is still a lot of work to do, Minor says. “Talent is key. And talent is what is going to be part of the issue for expansion projects going forward.”