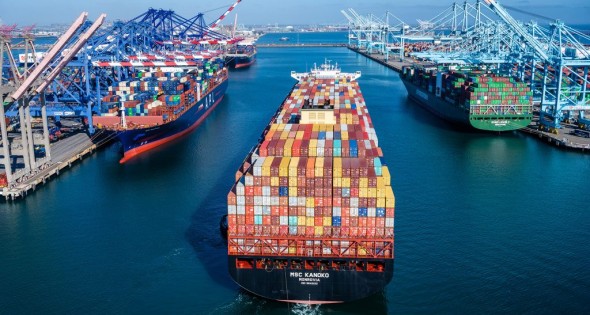 As losses from the pandemic subside, economic recovery for ports means making them more useful for larger and larger container ships.

The pandemic, now showing signs of abating, effectively slowed down cargo shipping into the U.S. through 2020, especially those shipments originating in China. But things are changing fast. Almost too fast.

Now the seaports around the country are scrambling to deal with the surge of traffic, causing serious vessel congestion especially in west coast ports where some container carriers are suspending calls in ports (such as Zim, a global, asset-light container liner shipping company from Israel suspending calls to the Oakland port in June) until the congestion situations issues are resolved.
But that sort of good news/bad news situation is something the seaports industry is dealing with as it takes time to plan better services for the vessels it serves, and finds creative solutions for helping fix the backlogs caused by the congestion. 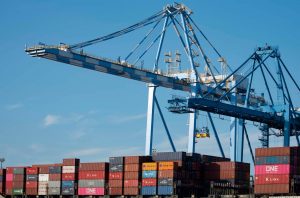 The first super-post-Panamax crane went to work for the first time in early August 2018, offloading containers from the Glen Canyon Bridge at the Port of Tacoma

In an annual report to Congress in 2019, the U.S. Department of Transportation (DOT) reported that waterborne vessels are the leading transportation mode for international freight, moving 41 percent of freight value in 2019—over $1.7 trillion.

The annual report also found that the ports of Baltimore, Houston, Mobile, New Orleans, New York and New Jersey, and Virginia are in the top 25 of all U.S. ports.

The top 25 ports handled a total of 55.5 million TEUs in 2019. The highest TEU volumes were associated with coastal container ports, such as the ports of Long Beach, Los Angeles, New York and New Jersey. These three ports accounted for about 44 percent of the total TEU handled at the top 25 container ports in 2019, according to statistics from the American Association of Port Authorities (AAPA). 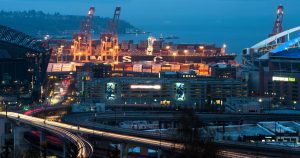 The MSC Laurence arrived at Port of Seattle’s Terminal 46 in 2018. At 13,000 TEUs, it was the largest container ship to call at the terminal

The 2020 Atlantic hurricane season was the most active on record, with September 2020 being the most active month. Hurricanes can cause numerous port closures and power outages, which may have a ripple effect on vessel schedules and dwell times.

Then there is the effect of the pandemic. The BTS is in the process of examining the extent to which maritime trade and transportation have rebounded from the impacts of the Covid pandemic.
As a result of Covid, according to the BTS, the values of U.S. vessel and container imports were down as much as 33 percent (about $33 billion) in May, 2020, compared to 23 percent (about $16 billion) in May 2019.

The top 10 container ports in 2019 handled 9 and 15 percent, respectively, fewer TEUs in the 1st quarter and 2nd quarter of 2020 than in 2019. Several of these ports (Long Beach, Los Angeles, and Northwest Seaport Alliance) reported numerous blanked sailings in 2020 (also known as “void,” sailings where either a vessel skips a port or the entire service string is canceled, allowing operators to reduce the supply of vessel capacity to better match decreased vessel capacity demand).

While this rebounding unfolds, ports are looking at other things that need to be focused on—chiefly, infrastructure. 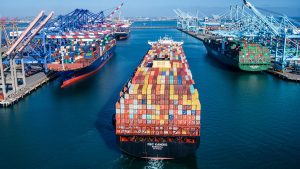 Busy container traffic in Pier 300 Channel at the Port of Los Angeles, one of the busiest in the U.S. Traffic began stacking up in the port during 2020, forcing some ships to relocate to the Seattle port

American seaport activity supports 26 percent of the economy, according to the AAPA, which represents more than 130 public port authorities in the U.S., Canada, the Caribbean and Latin America.
The value of economic activity related to seaport is $4.6 trillion a year. The AAPA also reported that $66 billion is needed for port-related infrastructure over the next ten years, as the amount of freight moved in the U.S. is projected to grow 15 percent by 2045.

The country’s trade volume is expected to quadruple after 2030, according to the AAPA. By 2037, the U.S. will export more than 52 million shipping containers through U.S. seaports each year.
As a result of this surge in trade volume, deeper channels need to be dredged, and road and rail connections need to be created or updated, among other infrastructure needs.

For example, approach channel depths can limit the size of vessels able to call at a port. The Pacific coast ports with their natural harbors, such as the ports of Long Beach and Los Angeles, have the deepest channels. The Mississippi River ports of Cincinnati-Northern Kentucky, Huntington, Pittsburgh, and St. Louis have the shallowest channels.

Even if a port’s minimum channel depth allows for megaships—such as the 1,200 foot long, 160 foot wide, 50 foot hull depth Panamax cargo ships, or the even larger Capesize vessels—the individual marine terminals within the port vicinity may not have the minimum depth to handle them, according to the DOT annual report to Congress.

“I think it’s pretty well understood that American infrastructure has challenges,” Ryan McFarland, the federal government relations manager for the Northwest Seaport Alliance, says. McFarland is also the chair of the American Association of Port Authorities’ Harbors and Navigation Committee, and vice president of the Pacific Northwest Waterways Association Executive Committee. “We have congested roads and ports. Many of our facilities are hitting the 40 year mark at a time when they are starting to need to be rehabilitated. We want ports to be part of that infrastructure picture because we are a critical part of the system. That is our top line goal—to make sure ports are included in the infrastructure conversation.”

As of June 29, 2021, there is $16 billion in federal funding included for ports and waterways in the infrastructure bill that has yet to pass in Congress as of this writing.

On the Northwest Shores 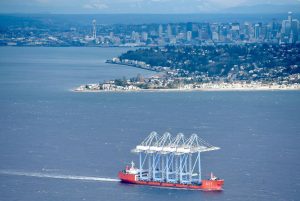 The new cranes for the Seattle Tacoma port, one of the largest on the West Coast, aboard the Zhen Hua 28 passed by West Seattle in 2018

Under a port development authority, The Northwest Seaport Alliance (NWSA) manages the container, breakbulk, auto and some bulk terminals in Seattle and Tacoma. The port is considered a premier container cargo port on the west coast because of its naturally deep berth, wide footprint, and the availability of an on-dock rail yard, which allows containers to be directly loaded from the ship onto rail lines.

The port includes six public container terminals, and two public terminals that handle bulk, break bulk and roll-on/roll-off cargoes. “We are going to be near half a billion dollars in total improvements at the port,” McFarland says.

With a modernized Terminal 5, the NWSA’s containerized cargo is estimated to reach nearly 7 million TEUs annually in 2050, according to a recent economic analysis by the NWSA. “Without the T-5 investments, containerized cargo is expected to be 5.3 million TEUs in 2050, a difference of 1.6 million TEUs,” a report published by the NWSA stated. “This estimated reduction of total TEUs could result in reduced economic impact, including more than 6,000 fewer jobs and $2 billion in lower direct business output.”

McFarland says that there has been a surge in 2021 of port traffic in the Seattle Tacoma port, much of it redirected from congested ports in Los Angeles and Long Beach, the number one and number two busiest ports in the U.S. respectively which represent a gateway to trans-Pacific trade with Asia. “Now we have some ships waiting at anchor. We have had to take some steps to address the congestion,” he says.

The port has used some of their vacant properties as container storage and cargo handling yards, allowing them to bring the cargo off the marine terminals to free up space so that more ships can be unloaded.

In early 2022, Terminal 5 will be opened, adding 185 acres of terminal capacity “exactly when it is needed,” McFarland says. “Ports in general need to provide modern terminals to be more efficient and handle more cargo volume. Terminal 5 will be our top facility, which will be capable of handling the largest ships.

“We are looking at finding a partnership with the federal government to increase federal investments in ports, which is key. We have a long list of things we need to do that we are struggling to do ourselves as fast as we need to. I think a lot of ports are in that boat.”