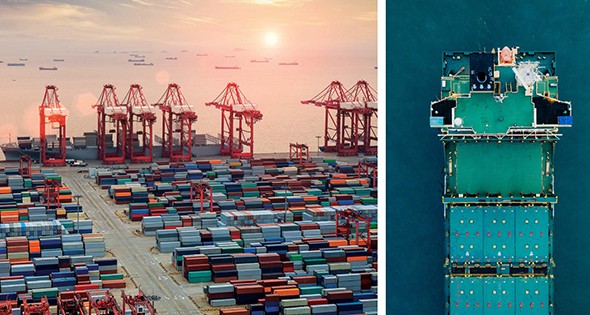 The nation’s seaports are strong economic drivers in the United States today, even more so because of the rise of e-commerce and the coming of larger and larger ships into the largest and busiest ports on both the east and west coasts.

According to a report by the American Association of Port Authorities (AAPA), “The National Economic Impact of the U.S. Coastal Port System”, there is $4.6 trillion in economic value at the country’s coastal ports.

A 2018 market report on the ports of New Jersey and New York by Cushman and Wakefield, a global real estate services firm, found that a major driver of demand – imports – increased 7.6 percent in 2017, and represented 63 percent of all loaded cargo volume in 2017 for the top 13 ports in the U.S.

CATCHING UP IN THE WILD WEST

This growth trend has created a scenario where too much of a good thing has caused issues with traffic into some of these ports.

At the same time, 2015 saw a decrease in container volumes at the Ports of Los Angeles, Long Beach, and Oakland as cargo ships carrying goods bound for the U.S. were diverted to foreign ports. Overall, the United States lost market share in the North American container trade as both Mexico and Canada gained market share.

The Commission reported that, once the congestion on the west coast subsided and the vessels waiting outside port could make call, west coast U.S. ports experienced growth for consecutive months to close out 2015, with growth continuing through the first quarter of 2016.

West coast ports have been taking steps to ensure that this congestion won’t happen again. For example, massive infrastructure improvement and expansion projects are underway to ensure ports can handle the increase in cargo volume due to mega ships, and super post Panamax cranes are being installed along the west coast to move more twenty-foot equivalent units (or TEU, the size of a standard cargo container) than ever before. 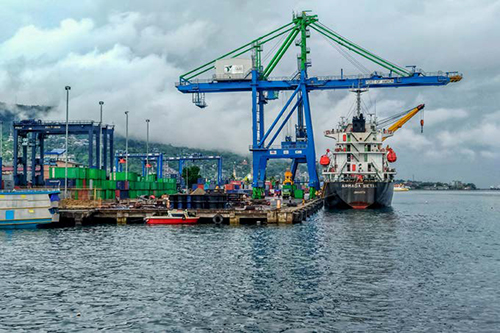 Managers of the Port of Los Angeles are now working with a $1.17 billion budget for 2016 and 2017 to continue port improvements. The Port of Long Beach has recently completed Phase I of its $4 billion Middle Harbor expansion, providing the terminal with full-automation and super post Panamax cranes capable of handling 20,000+ TEU vessels.

Phase II of the terminal is on-schedule for 2019.

In April of this year, the Northwest Seaport Alliance, composed of ports in Seattle and Tacoma, approved $141 million for terminal upgrades. Plans for the terminal include expansion and the installation of super post Panamax cranes at Husky Terminal in Tacoma.

According to the Commission’s report, the Tacoma’s Husky Terminal will receive reconstruction of Pier 4 that will line it up with Pier 3 to establish a continuous 2,960-foot berth.

Both Seattle and Tacoma have major terminal modernization projects underway that will provide improvements, allowing the port to handle larger ships, including having the right number and size cranes, enough container yard space, plus an efficient road, rail, and gate complex.

PLANS FOR THE EAST COAST PORTS

The Cushman Wakefield 2018 market report found that the Port of New York and New Jersey is expected to remain one of the top ports in the country, in part as a result of a new record set in 2017, with 6.7 million TEUs handled, up 7.3 percent from 2016.

The coming surge in cargo has created a need to upgrade the infrastructure in and around the port.

The Port Authority of New York and New Jersey (PANY-NJ), with the U.S. Army Corps of Engineers, recently completed the $2.1 billion dredging of the New York-New Jersey channel to 50-foot depth.

Since 2013, the PANY-NJ has been undertaking a navigational clearance project to raise the Bayonne Bridge from the original 151 feet to 215 feet over the Kill Van Kull strait, which connects Bayonne, N.J. with Staten Island, N.Y. The new elevated roadway opened to vehicular traffic in early 2017, and navigational clearance for larger container vessels was granted in mid-2017.

Beth Rooney, manager of port security for the Port of New York and New Jersey, says that the PANY-NJ has invested $600 million in their rail network, and also invested heavily in the widening of and capacity of their roadways to handle the increase in volume of cargo that the port is handling.

“I think the reality is that all ports are generally doing the same thing,” Rooney says. “Ships are getting larger and everybody wants to accommodate these larger ships, whether it is a reality or pipedream. What we have seen, in the last five years back to 2012, is that almost two-thirds of our cargo was on a ship that was 5,000 TEUs or smaller. In 2017, that percentage has flipped. Now two-thirds are 8,000 TEUs or larger per vessel.” 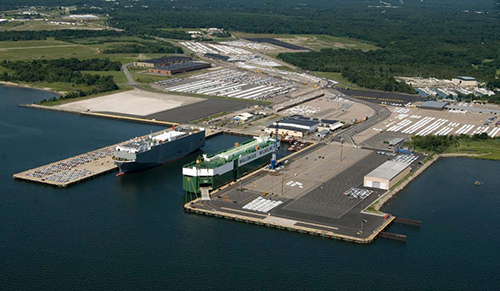 PORT of Davisville showing both pier 1 and 2.

Part of the reason for the increased traffic of the larger ships is the opening of the expanded Panama Canal in June, 2016. “If you look at what has happened in the port of New York and New Jersey after the canal opened, we have seen an increase in our vessel traffic of about seven percent,” Rooney says. “At the same time, we have seen a decrease in Suez Canal traffic, but a significant increase in those ships that are doing what they call the ‘around the world service’ using both canals.”

Another east coast port, the Port of Davisville in Rhode Island, managed by Quonset Development Corporation, handles mostly automobile and truck cargo. Last year, the port handled over 220,000 cars and over 200 ships in its two piers. “We are positioned to continue to grow to capitalize on capacity restraints in other ports,” Bob Blackburn, director of the Port of Davisville, says.

The port was allocated $50 million in 2016 for rehabilitation of their workhorse pier, Pier 2. For the last year, port managers have been collecting data, doing some design and permitting work, and will shortly begin construction on a sheet pile around the perimeter of the pier to protect it. “As time has progressed, because of backwash and wear and tear of the bay, there has been some deterioration,” Blackburn says. “The port has done a good job in the past in remedying those deteriorations.”

As part of the upgrades for Pier 2, they are also replacing existing rail which is aligned with and runs the length of the pier face, Blackburn says. “That is going to have a fortified base and we are going to add a second rail a little bit inshore from the face of the pier to give us more flexibility and provide intermodal moves directly from ship to rail.”

The U.S. seaports are transitioning to try to keep up with demand for services. But the U.S. Department of Commerce is seeking public input to improve the efficiency and competitiveness of the seaports.

The Maritime Commission reported that the Department of Commerce has requested all interested parties provide input via internet or mail regarding several questions, including: what are the most important challenges and opportunities facing U.S. port-related operations and efficiency; what federal policies could be modernized to promote port- related investment and performance; how the federal government can best collaborate with port stakeholders; what are the best practices for improving port-related operations; among others.

For more information on companies mentioned in this article, please visit: quonset.com

Port of South Louisiana: The Most Important Port You Probably Never Heard Of 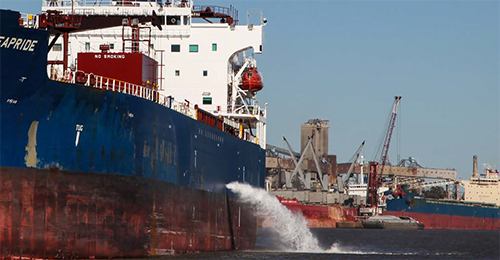 Port of South Louisiana’s performance demonstrates the strength and stability of its resident industry. The Port continues on its mission to promote maritime commerce, trade, and development and establish industrial facilities thereby creating jobs and a stronger tax base.

The Port of South Louisiana has one of North America’s largest concentration of heavy manufacturers, a reflection of the strategic location, comparative market access, and a highly-skilled labor pool. Industry leaders in the energy and chemical sectors continue to invest billions of dollars as they expand operations to capture market opportunities. Currently, the Port handles over $69 billion in trade annually that supports over 30 thousand direct jobs (6 out of 10 jobs) in the River Region, which translates to over 83 thousand jobs (1 out of 25) in the state of Louisiana. Regionally, it contributes $1.8 billion in income, $14.4 billion in revenue, and $72.5 million in state and local taxes.*

Industries from all over the globe (Taiwan, New Zealand, China, and Norway, to name a few), have taken notice of the Port of South Louisiana’s competitive advantages. As a matter of fact, the region has attracted imminent capital investment in the billions of dollars –$23.262 billion to be exact– by companies in the petrochemical, fertilizer, and logistics industries. Projects like these are vital to sustaining and promoting further economic prosperity for the Port of South Louisiana, the River

Region, and its labor force.

Dr. Loren C. Scott & Associates, Inc. (2015), Economic Powerhouse on the River: The Economic Impact of Industries within the Port of South Louisiana Jurisdiction on the Louisiana and PSL Region Economies 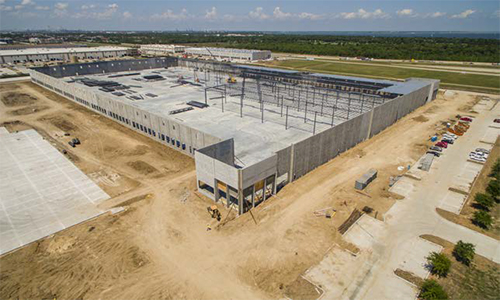 Numerous new large distribution centers throughout the Port Houston region have recently opened or broken ground. Long overlooked for Dallas, Houston is becoming more of a hub for distribution activity. In 2017, IKEA opened a large facility and others are either working on facilities or shopping the Houston area for warehouse space.

“Port Houston continues to thrive, handling nearly 13 million tons of cargo for the year in 2017, an increase of 9 percent over last year,” Houston-based Realty firm NAI Partners said in a report. “Total container volumes have also grown by 12 percent.”

Given the growth, Port Houston’s leadership has focused intently on infrastructure improvements in recent years, including both landside and waterside improvements. New super post-Panamax wharf cranes are in place at the Barbours Cut Container Terminal, with more scheduled for delivery later this year. Similar cranes are under construction and scheduled for delivery this year at the Bayport Container Terminal.

Largely, the port itself is the draw for distribution centers. A longtime significant economic engine for the region with a statewide and national reach, the port is anchored by the Houston Ship Channel, an industrial waterway more than a century old that is home to some of the biggest companies in the world that make up the nation’s largest petrochemical complex. Having a distribution center near the port, which is experiencing organic growth in addition to the anticipated growth in resin export, makes sense.

Another contributing factor is the population growth in Texas and the Houston region. Big-Box distributors can reach 50% of the population of Texas within 3 to 4 hours trucking time.

The southeast submarket, which includes the port, was responsible for 34 percent of absorption gains and 23 percent of total leasing activity in Houston last year, according to NAI. That is considerably higher than any other sector in the region.

The new plastic resins manufacturers coming on line in 2018 will increase demand for packaging capacity and will likely have a positive impact on the warehouse market. Logistics-oriented cross dock distribution centers will also do well as more e-commerce related products arrive at the Port from numerous overseas shippers.

Shippers are attracted to the port in part because of the quality of its infrastructure and its innovation and customer service, State-of-the-art truck gates are in use at Port Houston’s terminals to increase the efficiency of the supply chain and to reduce truck turn times and emissions.