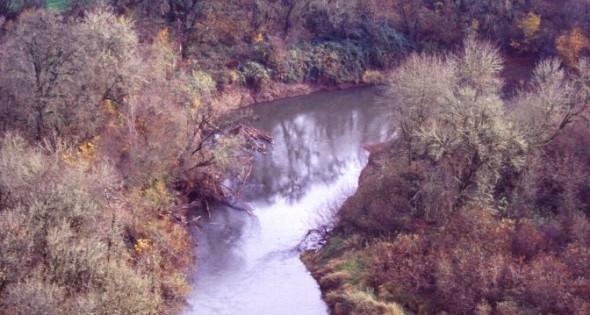 How the U.S. is using new ideas, innovative approaches to land management and efficiencies in crop production.

The United States has the fourth-largest forest estate in the world, including about eight percent of the world’s forests.

Tom Tidwell, chief of U.S. Forest Service of the U.S. Department of Agriculture (USDA), spelled out other details of U.S. forests in his 2016 speech, “State of Forests and Forestry in the U.S.”

He added that 56 percent of the U.S. forest lands are in private ownership. The rest are managed by local, tribal, state, and federal governments. “My agency alone manages about 20 percent of the forest land in the United States. The U.S. Forest Service manages about 77 million acres of federal land called national forests and national grasslands.”

The U.S. Forest Service also has the country’s largest conservation research organization, he said, with 7 research stations and 81 experimental forests nationwide, representing 85 percent of the forest types in the United States. “Our research records go back for more than a hundred years,” he said. “Science is the foundation for our forest management in the United States; science gives us opportunities to meet the challenges we face.”

The Rise of Agroforestry 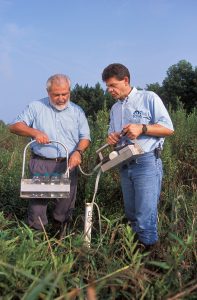 In Georgia, ecologist Richard Lowrance (left) and agricultural engineer George Vellidis pump water from a sampling well at the edge of a riparian forest buffer. They’ll test the water for contaminants to see how well the buffer is working.

America’s farmers, ranchers, and forest landowners are integrating trees with agriculture to address a variety of conservation and production goals.

That is the basis for agroforestry, a relatively new innovation for land management as defined by the USDA as an approach that provides opportunities to “integrate productivity and profitability with environmental stewardship to support healthy, sustainable agriculture systems, economies, and communities.”

A white paper about the economics of agroforestry further defines agroforestry as a land-use system that involves deliberate retention, introduction, or mixture of trees or other woody perennials in crop or animal production systems to take advantage of economic or ecological interactions among the components.

“Agroforestry is the intersection between forestry and agriculture,” Sarah Beebout, the national program leader for Sustainable Intensification at the USDA Agricultural Research Service (ARS) says. “It’s when you have both trees and agriculture production in the same area of land.”

The USDA lists five of the most common categories of agroforestry practices in the U.S.: windbreaks (also known as shelterbelts) for fields, farmsteads, and livestock; strips of forest acting as buffers along waterways, called riparian forests; silvopasture systems, which is a deliberate integration of trees and livestock; forest farming, with edible, herbal (botanicals), medicinal, and decorative products grown under managed forest cover; and alley cropping with annual crops and high-value trees and shrubs.

What agroforestry can do for the environment is protect topsoil, livestock, crops, and wildlife; increase the productivity of agricultural and horticultural crops; and reduce energy and chemical inputs. The USDA also reports that agroforestry can be designed to mitigate odor, improve pollinator habitats, and produce biomass feedstock.

A typical agroforestry application is when trees are used for windbreaks in areas of land where crops are exposed—on a ridge, for example. They can also be planted along a creek, where the trees are lined up between the crop fields and the creek. “That has a protective effect,” Beebout says. “It’s common for agriculture fertilizers to run off the field, or to leach down into the groundwater, and cause pollution in the creeks. The trees can pick up some of those nutrients before they reach the creeks, so there is an improvement in water quality.” 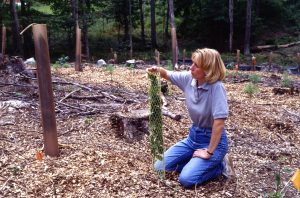 Adoption rates for agroforestry are low, suggesting that either the science and economic models are faulty, or that farmers are irrational.

“Many people have actually been doing agroforestry for a long time without calling it that,” she says, recalling how trees were used as windbreaks for crop fields during the Dust Bowl years in the 1930s.

“Many farmers already plant trees as windbreaks around their buildings. That is one type of agroforestry.”

But most of the time, they are not managing trees for the production or harvest from the trees, she says.

“There is now a move within agroforestry to increase the value of those systems by growing fruit or nut trees in windbreaks. That just takes more specialized knowledge. Because a lot of people who are really good at producing crops don’t have any idea where to start in terms of which trees to plant.”

To advance more interest in and use of agroforestry, the USDA has created the Agroforestry Strategic Framework, based upon input from the eight agency members of the USDA Agroforestry Executive Steering Committee (AESC) and the USDA Interagency Agroforestry Team (IAT).

The framework poses three strategic goals: 1) Ensure all landowners and communities have access to the latest tools and information that support agroforestry adoption; 2) Conduct applied and basic research to advance the science and technology that supports the use of agroforestry, and; 3) Facilitate the integration of agroforestry information, research, tools, and technologies to meet the goals and objectives of USDA agencies.

This framework will be used by the USDA mission for agroforestry to “advance agroforestry knowledge, tools, and assistance for the benefit of landowners, communities, and the nation.”

The Work of the ARS 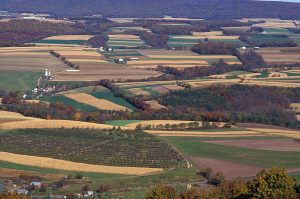 Pennsylvania watershed showing the patchwork quilt of forest, farmland, and other land uses typical of watersheds in MSEA and CEAP studies

Agroforestry and the innovation it represents is one of the ideas being explored by the ARS, the principal in-house research agency of the USDA. ARS is one of the four component agencies of USDA’s research, education, and economics mission area.

A few of the goals of the ARS are to ensure high-quality, safe food and other agricultural products; sustain a competitive agricultural economy; and provide economic opportunities for rural citizens, communities, and society as a whole.

Most ARS research on agroforestry systems comes in under the Natural Resources and Sustainable Agricultural Systems program. This program supports researchers at 70 locations who are developing the technologies and strategies needed to help farmers, ranchers, and other managers.
What the ARS focuses on is developing technologies that are and will be economical to use, creating and maintaining systems that support profitable production, and enhancing the country’s renewable natural resource base. 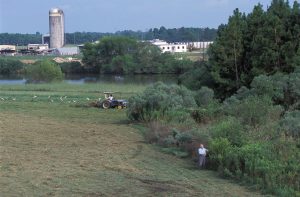 Specific agroforestry-related projects of several ARS locations include one in Ames, Iowa, “Managing Energy and Carbon Fluxes to Optimize Agroecosystem Productivity and Resilience.” The project studies field windbreaks’ impacts on soil carbon and nitrogen cycling, plus above-ground biomass and woody residue as a bioenergy feedstock.

The windbreak experiment involves a direct comparison of energy balance, biophysical properties, and productivity of rain-fed and irrigated crops with rain-fed crops protected by a windbreak at the Eastern Nebraska Research and Extension Center.
The objectives of the study are to focus on components of agricultural systems to provide a suite of observations on a common set of measurements to quantify carbon and energy exchanges, which would lead to the direct comparison of water use efficiency and radiation use efficiency of these different systems.

Another ARS project is underway in Davis, California, researching opportunities with grapevine rows to show the effects of intercropping grapevines with aromatic plants.
The experimental field used for the experiment was a commercial steep-slope vineyard with shallow soils with coarse rock fragments. Rows were either cultivated with Riesling grapes as a monocrop, or intercropped with oregano or thyme.

The results of the experimental field study showed that crop-plant diversification using aromatic plants in vineyards can be successfully established—but that it needs further study.
Other ARS agroforestry-related projects are being conducted in Lubbock, Texas; Beltsville, Maryland; Raleigh, North Carolina; and University Park, Pennsylvania.

Farmers can plant crops that actually take carbon out of the air and into the soil, reducing the overall carbon footprint of agriculture which is currently contributing about nine percent to total U.S. carbon emissions.

People are starting to explore the idea of paying farmers to capture carbon from the atmosphere, and agroforestry can be an important part of that, according to Beebout. “Trees are one way to get carbon in an agriculture landscape and keep it there for a long time,” she says. “If you capture the carbon in a growing tree, it can stay captured for 100 years. In the next few years, we will see that carbon market system as a driver for more people to plant more trees in agriculture landscapes.”