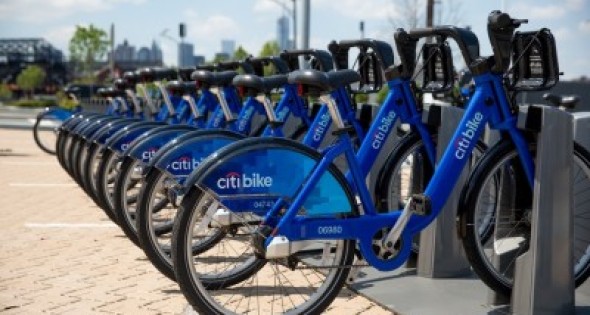 Bike Sharing Gets Into Gear

As vibrant, livable communities which are walkable and compact become increasingly desirable, bike sharing programs are taking on a growing role in facilitating the “live-work-play” lifestyle, especially in urban centers underserved by public transit.

A bike sharing system consists of a fleet of specially-designed bikes placed in docking stations at regular intervals around a city. In addition to public transit stations, typical locations include public parks, pedestrian plazas and privately-owned public spaces, wide sidewalks and in curbside lanes and medians. The bikes can be rented from and then returned to any station in the system, creating a network with many possible points and combinations of departure and arrival.

“An effective bike share system is one that is integrated into a larger sustainable transportation system,” says Raksha Vasudevan, senior sustainability associate, National League of Cities (NLC). “If planned well, such systems can improve connectivity and increase mobility for residents, while being an affordable form of transportation.”

In addition to encouraging physical activity and environmental gains such as reducing traffic congestion and demand for parking space, bike share systems bring a number of economic and intangible benefits, according to NLC’s municipal guide, Integrating Bike Share Programs into a Sustainable Transportation System.

Though such programs — which are often public-private partnerships — are not always profitable, in the right circumstances they can boost retail exposure and home values, consequently adding to municipal tax revenues, the NLC contends. They are also attractive to residents and tourists, thereby contributing to a city’s reputation for livability. Riding a bicycle as a means of transportation or recreation allows individuals to experience a city on a human scale and add to a thriving urban landscape. Bike share systems offer the convenience and affordability of a bicycle while allowing users to forgo maintenance costs, theft prevention or the need to always make a two-way trip.

Though European cities such as Amsterdam, Paris and Stockholm have led the way in adopting bicycle-friendly policies and bike share programs for well over a decade or more, the United States is catching up rapidly. While still relatively young, today’s American bike share programs are building on lessons learned from their European and Canadian counterparts and have been reaching critical mass in adoption rates over the last few years. Urban centers such as Boston, Chicago, Denver, Miami, Minneapolis and Chattanooga have already launched systems, while Portland, San Francisco and several other areas are close behind.

“We’re starting to see the effects of heavy dependence on automobiles in the U.S. and are turning back to the bicycle as a viable part of the transportation system,” says Paul DeMaio, managing member, MetroBike, LLC. “The latest mobile types of bike sharing stations have really opened things up, thanks to ease of installation.”

A lot of people are moving back to urban areas and creating demand for apartments and condominiums, he continues. However, not everybody can afford to pay a premium for living near commuter rail or a subway station, so bike sharing has emerged as an inexpensive, healthy, environmentally-friendly way of getting around. It solves the “first and last mile” problem of getting people to and from transit nodes in a simple, economical way.

In a recent survey, DeMaio found that customers were saving about $850 per year using the service because they weren’t driving as much and switching some of their transit trips to bike sharing instead.

Commuters are not the only ones taking advantage of the arrival of bike share systems, notes Cheryl Cort, policy director, Coalition for Smarter Growth.

“Bike sharing has been growing by leaps and bounds in our metropolitan region and we know that it’s been similarly well-received in many other cities, so we expect growth to continue,” she says. “It’s appealing because it gives people another transportation choice for tapping into the overall convenience and excitement of urban living. People are attracted to walkable urban places and are getting more interested in a car-free or car-light lifestyle. A lot of retirees and empty nesters in particular are flocking to urban environments where they can take advantage of walking more or hopping on a bike share if that gets them to their destination.”

A notable success story DeMaio points to is Washington, D.C., whose 1,800-bike program Capital Bikeshare dates back to 2008. The system has logged nearly five million trips throughout 200 stations across the D.C. metro area since September 2010 and is expanding again to keep up with demand.

In terms of sheer scale, one of the nation’s largest and fastest-growing systems is New York’s 6,000-bike Citi Bike, which registered more than 529,000 trips and 1.28 million miles traveled in just the first four weeks after its May 2013 launch.

Funded by a $41 million sponsorship from Citibank, Citi Bike is operated by a subsidiary of Alta Bicycle Share, a unique company focused solely on operating large-scale bike share systems. Citi Bike’s equipment is provided by Public Bike System Company (PBSC), a market leader with 37,000 bikes and 2,600 stations in 17 cities and other locations worldwide.

The company — which was originally created to operate the Bixi Public Bike System in Montréal — developed a unique system based on modular technical platforms that can accommodate bikes, bike docks and pay stations, explains Michel Philibert, interim CEO, PBSC Urban Solutions, in an email correspondence.

A linchpin of PBSC’s system is that it uses solar-powered pay stations and wireless communication to avoid the need of hooking up to a community’s telecommunications and power grid, thus reducing excavation requirements and associated costs.

Because the platforms are portable and energy self-sufficient, they require little preparatory work or installation time. A single bike station is approximately the size of a parking spot and can be set up within a matter of minutes, while a functioning bike station of virtually any size and configuration can be created anywhere much more quickly than a wired, permanent station.

The system is also quick to dismantle and all components can be easily transported to other locations, with no impact on the environment or the station’s urban surroundings.

“Over the next several years, I definitely see any jurisdiction with a bus transit service to having or at least be looking into its own bike-sharing service.” –  Paul DeMaio, managing member, MetroBike, LLC

The potential benefits are many, but prior to starting a bike share program, site selectors and local governments should undertake a thorough assessment, since there are several possible growing pains to be aware of, Vasudevan advises.

Foremost, she says, is that bike share systems, if not properly researched, planned for and marketed to communities, can experience challenges in rider adoption. Common problems may include a lack of safe, accessible and connected infrastructure, poor design, an insufficient supply of bicycles and varying levels of rider comfort or familiarity with bike systems.

Constant “load balancing” is another issue for bike share operators to contend with. They must frequently haul bikes around the city from high-usage to low-usage areas in order to replenish depleted supply, often in polluting box trucks, negating the reduction in carbon emissions that bike sharing is supposed to yield.

For municipalities concerned about theft and vandalism, system operators report minimal problems thanks to a variety of several built-in system features. Bike share bikes include strong locking mechanisms, are made with special parts that have no independent resale value and bikes and stations cannot be disassembled without special proprietary tools. Some systems, like New York’s, also include on-board GPS units and RFID tags, allowing for precise location of missing bikes.

Focusing on safety and getting involvement and buy-in from local stakeholders are critical, adds DeMaio. “Without the political support of elected leaders and even the transportation directors and others, it won’t happen.”

From Fad to Fixture

Although it’s unlikely for American cities — many of which are sprawling and highly car-based — to be completely transformed by bike sharing, today’s “third-generation” systems have the potential of becoming an integrated mode of transportation around the country. This is true especially in those locales of sufficient population density which are focused on enhancing the “live-work-play” aspects of their communities.

“Bike sharing appeals to people who want to be in an active and energetic environment with interesting destinations,” Cort says. “While the trend seems to be strongest among Millennials, bike sharing is definitely part of the broader shift of people of different ages and at different points in their lives being attracted to walkable, bikeable urban places.”

“Adoption of bike sharing in the U.S. is progressing at a fast speed and I see more growth likely to come,” DeMaio says. “It seems like every other week there’s a new RFP from yet another locality wanting to implement a bike sharing service. As more and more people are bicycling, the demand for bicycle facilities becomes greater, leading to more facilities being built and even more people bicycling. So over the next several years, I definitely see any jurisdiction with a bus transit service to having or at least be looking into its own bike-sharing service.”