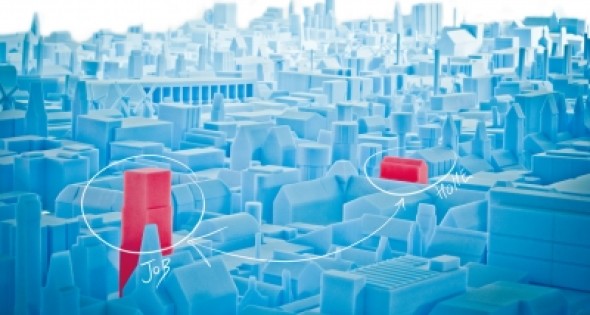 Does a quality place really matter?

Frogdice’s Michael Hartman took a nontraditional path when establishing his video game development company. He taught himself to program while he was attending law school at the University of Georgia.
When he started his game development studio in 1996, he couldn’t have imagined his path would lead him to a career in video game development, living and working in Lexington, Ky. Hartman wouldn’t have it any other way. “This is the longest I have lived anywhere,” he says. “I love Kentucky and I love having our company here and living here.”
Hartman is the norm rather than the exception when it comes to talent deciding where they want to work and live. Today’s workforce continues to select locations based on where they believe they can achieve a balance between work and life. A location that will foster their version of the American Dream.
Place, and the perception of place, matter. “Place to me is the equivalent of product development,” says Ed Burghard, founder of the Burghard Group. “It is all about creating an experience for a location.” He believes community leaders should take a long-term view to ensure their communities are competitive not only for capital investment, but also as locations to attract and retain talent.

Company executives may want to take note of the results of the dream cities ranking. The cities that rose above the rest have a balance in the ability for residents to achieve their economic dreams. The locations are environmentally friendly, and locations that offer social support, places where residents feel like their voices are heard and their opinions matter.

“Businesses want a vibrant community, where their employees want to live and work,” says Warwick (R.I.) Mayor Scott Avedisian. The community is adding new infrastructure assets, including an expanded airport and service from an additional airline carrier. The City Centre Warwick, spearheaded by a train station hub, offers one of the nation’s closest connections between planes and commuter rail.
There are also developable acres surrounding City Centre Warwick, which is creating an energy businesses want to plug into. Other infrastructure assets include enhancements along the community’s miles of coastline, including a new walking trail. The coast is five minutes from the transportation hub. In the last three years, 122 acres of open space have been added near the Narragansett Bay. “You have the coast, top notch shopping and retail, all minutes from your house,” Avedisian says. “We have an infrastructure that directly impacts business opportunities, which impacts the quality of life of our residents.”
Burghard notes that business expansion has “always been about the quality of the place. It was just that before you [communities] could be a little sloppy. Now there is no room for error.” He points out that leaders have to address the things that are getting in the way of people wanting to live and work in their communities.
A ranking released earlier this year, 2013 America’s Dream Cities, outlines leading cities where residents, not outsiders, indicated it was easier, in a significant way, to achieve their American Dream. Burghard partnered with researchers at Xavier University who have developed the American Dream Composite Index, which is powered by Dunnhumby, to develop the ranking. The university’s index is a statistically validated survey measure that reveals how people living in a location feel about their personal well-being and physical environment.
Company executives may want to take note of the results of the dream cities ranking. The cities that rose above the rest have a balance in the ability for residents to achieve their economic dreams. The locations are environmentally friendly, and locations that offer social support, places where residents feel like their voices are heard and their opinions matter.
When employees feel good about their lives in and out of work, they are more productive, Burghard says.
Officials in Lexington believe downtown revitalization efforts allow residents to achieve their dreams. The thriving downtown is attracting small and large companies to conduct business from the location. Reinvestments include the addition of loft housing and eclectic working spaces. Efforts focus on three main corridor streets, which feature events in the arts, brew pubs, and independent restaurants. The streets are served by a trolley system.
“One of the important factors is we are a highly educated community,” says Gina Greathouse, senior vice president of economic development, Commerce Lexington Inc., part of the local chamber. “That has to do with the presence of several colleges near Lexington.” Three of the schools are located within two miles of each other.
Jump and Land
Frogdice’s Hartman was drawn to Lexington by way of his wife, Pang, who is originally from Campbellsville, Ky. She did her undergraduate studies at Centre College in Danville, and would visit nearby Lexington on weekend breaks from college. Her experiences had a lasting impact and drew her back, along with Michael and their family in tow.
Hartman is the classic entrepreneur; he wanted to build a better product, in this case, a video game. Games were built from a programmer’s perspective and he took an approach where creativity and professionalism were the priorities. “Other games were technological feats rather than creative feats,” he says.
Frogdice’s first game was Threshold, a text based online role playing game he developed while in law school. When faced with the choice to apply funds to support studying for and taking the bar exam or putting those funds back into his fledgling gaming company, he selected the later.
That was back in the late 1990s. Since then, Frogdice has grown to eight full-time employees, expanding its portfolio of published games from two to six. “In the early days everyone thought I was crazy,” Hartman says. “It was 10 years before my family stopped asking me when I was going to be a lawyer.”
Pang Hartman joined Frogdice in 2000. In true gamer style, they met online while playing Threshold. At the time, Pang was in Vermont, also studying law.
The Hartmans benefit from Lexington’s business climate, which embraces new ideas and startups, and which has fostered a video game studio cluster. Frogdice is located in an office condo near downtown Lexington. The company is plugged in and networking; Michael co-founded RunJumpDev, a group of aspiring and current game developers. “There have been people coming out of it who will most likely create professional studios,” Hartman says.
The downtown features collaborative spaces to support startups, including Awesome Inc. Lexington is home to the University of Kentucky, which features a technology center with lab space, home to software development companies, among others.
Economic developers work with the staff at the university’s college of engineering to expand the area’s IT cluster, which includes HP, Xerox and Lexmark, which used to be a part of IBM. When IBM downsized several years ago, many of the retirees remained in the area, starting their own high tech and software development companies.

“It is a good synergy back and forth, which has been cool. We have benefitted from the university being here and they have benefited from us being here.”- Michael Hartman, founder and president, Frogdice

In a lifestyle choice similar to the Hartmans, Davis Marksbury is a central Kentucky native who graduated from the University of Kentucky and choose to return to Lexington after working engineering jobs in other locations. Along with Dan Kloiber, he formed a software company in the area, which they eventually sold. In 1998, they formed Exstream Software in Lexington. Marksbury credits Lexington as an ideal location for the business, with a skilled labor pool, accessible business leaders, and a five-minute drive to an expanding airport.
In a scenario playing out across the country, the university plays a critical role in Lexington’s economic development efforts. “The university’s small business development center and the innovation and commercialization center are located in our offices,” Greathouse says. Additional partners are the Bluegrass Development Partnership, which is comprised of the Bluegrass Angels, the Lexington Venture Club and an event called Five Across, which is in its fifth year. At the event, five companies are given five minutes and five slides to tell their stories; the winner receives a cash prize.
Frogdice has been one of the Five Across participants. “Warren Nash encouraged me to do a Five Across pitch with the Bluegrass Angels in Lexington and the Enterprise Angels in Louisville,” Hartman says. “We secured Series A funding, all from local investors.”
Nash is the director of the Lexington Innovation and Commercialization Center, which is a member of the Kentucky Innovation Network. “He has helped a number of studios line up bonus funding to attend a large video game conference with 100,000 attendees,” Hartman says. “It is a great way to get exposure for your game.”
Hartman is also proud to give back to young talent. Frogdice has been the launching pad for interns, who after gaining tech experience, such as creating a video game, go on to internships at larger tech companies. For example, one of Frogdice’s interns left to intern at Microsoft and now works at the company. What’s more, interns have also gone on to work for Lexmark in Lexington.
“It is a good synergy back and forth, which has been cool,” Hartman adds. “We have benefitted from the university being here and they have benefited from us being here.”
For complete details on the organizations featured in this article, visit:
American Dream Composite Index