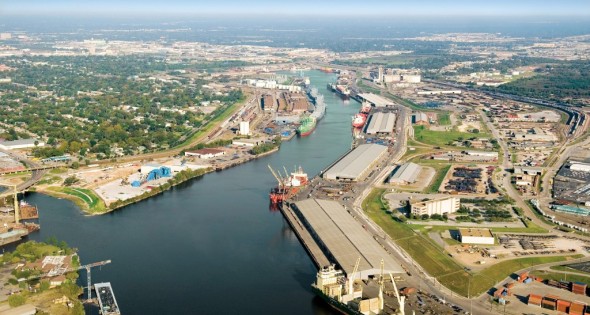 Seaports get Ready for Supersizing

Despite years of trade imbalances, navigable waterways and seaports remain critical to the nation’s industrial base and consumer economy. According to industry data, U.S. seaports are responsible for moving more than 99 percent of the country’s overseas cargo by volume and 65 percent by value. International trade via seaports accounts for more than 32 percent of the U.S. GDP and is expected to increase to 60 percent by 2030.

Changing regional demographics, shifting global trade patterns, the emergence of a new generation of container “superships” and the widening of the Panama Canal — expected to be completed in late 2014 and fully operational in 2015 — are having a major impact on U.S. seaports.

Not only are these changes creating demand for ports along the Gulf of Mexico and Eastern seaboard to handle “post-Panamax” ships, it’s also driving ports and communities to specialize and invest in long-term infrastructure and upgrades.

Investing for the Future

Dredging harbors to accommodate supersized ships is critical, but deeper harbors by themselves are just a start, explains Kurt Nagle, president and CEO, American Association of Port Authorities. Post-Panamax shippers will be looking for ports that can enable quick and reliable unloading and transport of goods, with efficient access to major markets. This will make infrastructure improvements such as upgraded warehouse and distribution facilities, and better on-dock rail, tunnel and highway connections a key part of many ports’ plans.

“Unfortunately, our transportation system has not been adequately maintained or improved to really keep pace with the broader changes in international trade and the larger vessel fleet, especially at the “last mile,” Nagle says. “However, our port authorities and their private-sector partners are recognizing what the future requires, and are planning to invest an estimated $46 billion for infrastructure between 2012 and 2016,” he says. “Much of this investment will go into modernizing and expanding facilities for more efficient cargo movement, and in so doing creating jobs, reducing the cost to consumers for imported goods, and making American exports more competitive overseas.”

“Thanks to population growth and a strong business climate, the port has seen phenomenal growth in terms of trans-Pacific shipments coming into Houston. In just 10 years, it’s gone from representing zero percent of our total book of business to more than 17 percent today.” – John Moseley, general manager of trade development, Port of Houston Authority

“Thanks to population growth and a strong business climate, the port has seen phenomenal growth in terms of trans-Pacific shipments coming into Houston,” says John Moseley, general manager of trade development, Port of Houston Authority. “In just 10 years, it’s gone from representing zero percent of our total book of business to more than 17 percent today. In October of last year alone, we saw a 12 percent rise in our Asian import container volume, larger than what any other ports have experienced.

“We’re already handling big ships, including post-Panamax vessels, but we need to do some more dredging by the end of 2014,” Moseley continues. “We’re targeting what represents about 85 percent of the global fleet, so at 45 feet, we’ll be able to handle 10,000-TEU size ships, fully-laden.

“The other big story here is the recovery of new energy resources, especially shale oil and low-cost natural gas,” Moseley continues. “We’re tied to the enormous Eagle Ford Shale play, which has made us a big engine and nucleus for the energy sector. That in turn is driving demand for value-added services and facilities for storage, transit, piping and rethreading. Between that and being the largest port in the country in terms of foreign tonnage, we’re really excited about the year coming up.”

Heading east, significant investments are also underway at the largest tonnage port in the Western Hemisphere, along the Port of South Louisiana on the Mississippi River between New Orleans and Baton Rouge.

“We’ve had an enormous amount of activity as far as barges and ships are concerned, and a banner year of site selectors looking for sites in our port district in 2012,” says Linda Prudhomme, director of business development, Port of South Louisiana. “Part of the interest in our region is because of low-cost, abundant natural gas and the raw materials for pipeline connections. For 2013, we’re investing in our port and also exploring opportunities to increase our container business when the widening of the Panama Canal is complete.”

Expansion plans include the construction of landside facilities, airport development and runway extension, and the establishment a new $6.6 million warehouse addition at the Globalplex Intermodal Terminal, with a conveyor system for transloading cargo. In addition, the port will be inaugurating its Maritime Security Operations Center as a hub for maritime security and disaster response and recovery in the region.

Although waterborne freight has scaled up tremendously in recent years, pursuing size and volume are not the only successful strategies ports are taking.

“With the recession and transformation of what ports are doing, Pensacola had become stagnant in the port business,” says Ashton Hayward, mayor, City of Pensacola, Fla. “We decided to focus on the oil and gas industry which we understand and is a big money driver in the Gulf. We’re close to a lot of rigs, drilling and pipelines and offer easy access that lets you get in and out quick.

“Even during recessions, seaports are growing in relevance as globalization continues, so they’re an essential and effective utilization of limited resources. It’s one of those things where you get far more in return than what you spend.” – Kurt Nagle, president and CEO, American Association of Port Authorities

“We’re not the size of a container port like our neighbors to the west and east,” Hayward continues. “However, we’re attractive to organizations focusing on specific industries. Plus, being a “boutique port” with direct oversight from the mayor’s office allows us to cut through the red tape. When you deal with a large port, you’re dealing with layers of bureaucracy.”

With eight deep-draft berths and more than 400,000 square feet of covered storage, the 50-acre facility offers a Foreign Trade Zone and Enterprise Zone, along with stevedoring and marine terminal services for all descriptions of bulk, breakbulk and unitized freight. The port was recently awarded $2 million to support the construction of a “high hat” bay, installation of overhead cranes and three dockside shore power stations and gray water/sanitary sewer discharge portals.

Regions servicing ocean-going vessels are at the forefront of tapping into global trade, however inland ports and waterways are also taking their expertise and water resources in new economic directions.

“We’ve got skilled labor and good business conditions here, but being at the crossroads of one of the USA’s most unusual waterways is an extra strategic advantage,” says Gary Matthews, executive director, Tishomingo County (Miss.) Development Foundation. “We’re at an intersection that goes south all the way to the Gulf, as far east as far as Knoxville, and north even to the Great Lakes.”

The Mississippi community is served by the Tennessee River and the Tennessee-Tombigbee Waterway with direct connections to the Port of Mobile and the Ohio-Mississippi-Missouri River network. Facilities include a full-service port, a Foreign Trade Subzone and approximately 2,500 acres of industrial sites supporting a growing cluster of metal fabrication, cement distribution and steel processing.

“Manufacturing involves almost 40 percent of our local workforce and has been a very important part of the economy here for more than 70 years,” Matthews says. “With the continuing increase in transportation costs, business and industry are focusing even more on water transportation to control those costs. So we’re leveraging our waterway and traditional strengths into new industries including heavy metal fabrication, biofuels, composites and aerospace.”

One local success story is Contract Fabricators Inc., which recently cut the ribbon on its newest steel fabrica­tion plant and million dollar barge facility in Iuka, Miss. The company made a significant investment in the area, since accessing the nation’s water transportation system allows it to better service its customers.

“Our customers are demanding larger and heavier fabrications which require shipping by water,” said Mike Clarkson, vice president, Contract Fabricators, in a public statement. “The cost savings are substantial and we pass those savings along to our customers. We searched in several states for a waterfront location, but were most impressed with the teamwork in Mississippi and Tishomingo County.”

ROI for the Long Term

Even in the new era of superships, shifting trade patterns and population change, companies and communities should feel confident investing in seaport and waterway infrastructure to gain a competitive edge.

“We’ve had good years even during the recession, but because companies are focusing on reducing their transportation costs, we’ve seen a good bit of interest in this part of the country and expect 2013 to be one of our best years ever,” Matthews says.

“Though the U.S. — particularly at the highest level — needs to improve infrastructure at our ports for us to remain competitive going forward, trade is an absolutely vital part of the economy, making our seaports a vibrant nexus of activity and business opportunity,” Nagle urges. “Even during recessions, seaports are growing in relevance as globalization continues, so they’re an essential and effective utilization of limited resources. It’s one of those things where you get far more in return than what you spend.”