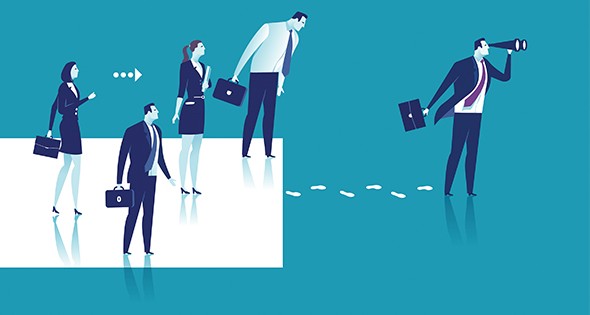 Beyond Adversity: Learning to be a Resilient Leader

The wisest of business executives often cultivate their core leadership principles, as well as the arcs of their character, through professional adversity and the unforeseeable hardships of life. Like with steel, a fiery furnace can forge and temper leadership.

Leadership is not a granted quality. It is not bestowed like a gift or transmitted through genetics. It is earned, and frequently at the tip of the proverbial sword. Like all human worth, it’s the product of constant exercise, practice and perseverance. And it necessarily entails failure, tough times and hardship.

When adversity arrives, the human instinct is to deny its importance, attribute it to an uncontrollable person or outside event, or, even better, to ignore it. That’s perfectly natural. Confronting true adversity is ill suited to the human condition. Yet, frustration and failure are unavoidable for leaders. The question remains: what can be gained when adversity arrives?

Too often, leaders foolishly think nothing in an adversarial moment or chaotic experience can hold deeper meaning for the individual or the company beyond sheer survival. Rather, in embracing and learning from challenges, failures and mistakes, there is a path toward greater personal and professional tenacity and resilience.

Sheryl Sandberg, the chief operating officer of Facebook and author of The New York Times bestseller “Lean In,’’ has described her own encounter with adversity after the unexpected death of her 47-year-old husband in May, 2015, and how she was able to recover through a cultivated and practiced resilience.

“And when the challenges come, I hope you remember that anchored deep within you is the ability to learn and grow. You are not born with a fixed amount of resilience. Like a muscle, you can build it up, draw on it when you need it,” said Sandberg, during her address at the University of California, Berkeley, commencement on May 14, 2016.

Sandberg’s recommendation to graduates to grow their resilience is good advice. The ability to withstand the hurricane-force winds of economic upheaval, career setbacks and professional failure is essential at a time when unpredictability is a hallmark of today’s workforce and economy.

Even seemingly prepared and resilient leaders fail. The Great Recession saw any number of business executives, many of whom were riding high in the early 2000s, crash with the breakdown of the global economy. Companies such as Circuit City Stores, DHL Shipping, Linens ‘N Things and Mervyns succumbed to the pressures and closed.

Adversity may not be welcome but it should not be feared or allowed to flourish. Each experience of hardship gives leaders a chance to build a capacity for strength and to fill a leadership toolbox with the skills needed to respond efficiently and effectively, now and in the future. Adversity happens, but the true leader determines what to make of it when it arrives.

An example of this resilience is the story of Chandra and Sanjay, who are married and own several food trucks. Chandra worked for a food incubator, and Sanjay served as a chef for a popular local restaurant. After three years, the two had saved enough money to open their own Indian food truck. While Sanjay earned the family’s core income, Chandra took charge of the food truck and the early signs were promising. Then Sanjay lost his job, and the couple’s finances were in doubt and threatened their fledgling venture. They remember it as a make-or-break moment – and an opportunity to learn from and master hardships.

Sanjay found another chef position that paid more and required him to work less. Chandra continued to captain the food truck business. Local regulations, high food costs, equipment failures and even inclement weather nearly sidelined the truck again. Yet with each roadblock, the two mastered the problem. They developed the emotional tools to handle adversity and not shrink back in fear or confusion at the inevitable next hurdle. After a showdown with a vendor over food prices, they learned to use multiple suppliers for their food truck to provide similar products, ensuring competitive pricing and reducing dependency.

Small and large misfortunes develop mental toughness and the mindset to fight back. Armed with knowledge and experience, experienced leaders are able to fine-tune skills at solving problems and aren’t overwhelmed by the course of events. For Sanjay and Chandra, facing adversity rather than looking for ways to avoid it expanded their capacity for problem solving. Today, they own three food trucks, and they’re planning to open a restaurant of their own.

Beyond resilience, these moments of hardship produce insights into how to handle problems (head on or sideways) and what tools to employ in addressing difficulties (processes and practices put in place to address problems). They also help determine how best to motivate colleagues to work collectively or individually to resolve difficulties.

Admittedly, resilience, like “grit,” has become a popular notion in business literature – a cure-all for downturns in careers or bumps in the road for organizations. It makes sense, however, that an individual or company has a better chance of surviving adversity if they’ve been tested before.

Another benefit of adversity is that it teaches leaders how to play the game, including learning how to lose with a winning attitude. These skills make it easier to accept new responsibilities, even if individuals aren’t ready for misfortune or are facing a likely defeat. Few people ever feel ready when contemplating the unknown, but an individual accomplished in pushing through conflict to resolution is able to respond and recover, if necessary.

Or as British statesman Winston Churchill noted: “We shall draw from the heart of suffering itself the means of inspiration and survival.”

By recognizing and conquering complications, leaders are able to strengthen their cores, making difficulties and struggles the building blocks of future success. With an open mind and a commitment to learning, individuals can deepen their reservoir of resilience and be better prepared for the next adverse moment that could sideline a career or a company.

James R. Bailey is Professor and Hochberg Fellow of Leadership Development at George Washington University’s School of Business. He is a best-selling author, frequent keynote speaker, a regular contributor to Harvard Business Review, the Washington Post, and The Hill Newspaper, and is a frequent guest on national and international TV and radio broadcasts.