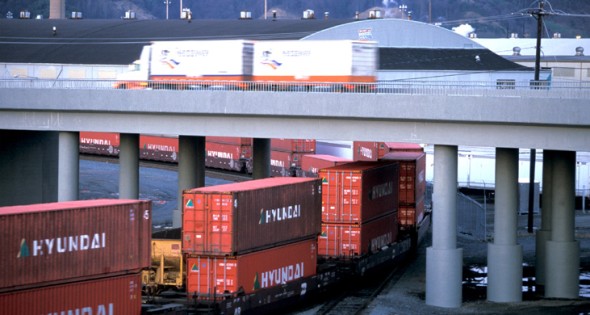 AAPA to Release State of Freight Report on April 21

Report will be released in conjunction with the AAPA’s spring conference being held April 20-22 at The Mayflower Renaissance Washington, D.C. Hotel

In an April 21 press event during its annual Spring Conference in Washington, D.C., the American Association of Port Authorities (AAPA) – the collective voice of public ports in the Americas – will unveil results of its new survey detailing conditions of the land transportation connections with United States seaports, one-third of which need $100 million or more in capital improvements by 2025.

Land-side connections serve as vital links between U.S. seaports and other segments of the nation’s freight transportation network. “Our new survey reveals the extent to which these connectors to U.S. seaports are deteriorating, have become out-of-date and are overly-congested, particularly as trade volumes continue to grow,” Kurt Nagle, president and CEO, AAPA. “Without immediate and significant federal, state and local investments, the poor condition of many of these land connections will threaten the long-term ability of our nation’s ports to efficiently move cargo, create jobs and strengthen the U.S. economy.”

Incorporated in the release of AAPA’s 2015 Surface Transportation Infrastructure Survey: The State of Freight will be new economic impact data and analysis from Martin Associate’s The Local and Regional Economic Impacts of the U.S. Deepwater Port System, 2014, also being released on April 21. In the new Martin Associates report, total economic value of marine cargo activity at U.S. seaports in 2014 was $4.6 trillion, up from $3.2 trillion in the firm’s last nationwide deep-water ports study in 2007.

The new report, which reveals significant increases in everything from the jobs generated (23.1 million) to tax revenues associated with cargo moving through America’s ports ($321 billion), helps illustrate the importance of enhancing both the water- and land-side connections with these crucial international gateways. Combined, the results of the two reports point to both the need and urgency for upgrading the transportation connections linking ports with the nation’s freight network.