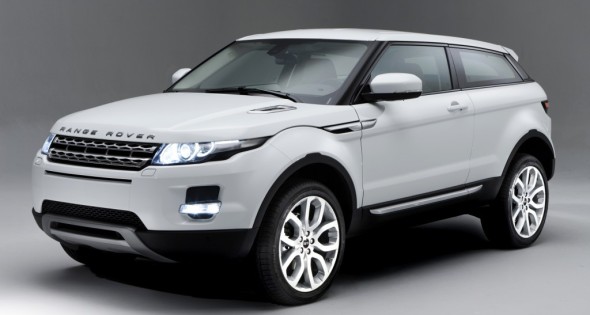 Auto OEMs Deal With Changes in How We Move

Caption: The 2011 Range Rover Evoque featured a 35 percent overall weight reduction compared to Land Rover’s 2010 Range Rover Sport model. The company used resins from Innovative Plastics, a business unit of SABIC, in areas such as the front fenders, and in the pedestrian energy absorber. Photo: SABIC

Lower prices for gasoline are driving Americans back to larger cars, resulting in the continued resurgence of the big truck and SUV markets. Ironically, “on the other end we will see a continued push toward hybrids and electric vehicles,” says Mark Sweeney, McCallum Sweeney Consulting Inc.
The advancements in the development of autonomous vehicles, as well as the increase in the average age of young people acquiring driver’s licenses, and ride sharing services such as Uber and Zipcar, are trends playing out in the automotive industry. In fact, the word “mobility” can be found filling in for the word “driving.”
In spite of these developments, the demand in North America for automobiles is nearing pre-recession levels. Light vehicle sales for 2014 amounted to 16.4 million units, up 5.8 percent from 2013, according to data from the National Automotive Dealers Association. Auto production increases are expected at existing assembly facilities, and, quite possibly, decisions will be made in regard to establishing new facilities at some point in the next couple of years. Supplier activity continues to remain strong, supporting the upsurge in auto production numbers.
Favorable Gas Prices Felt Everywhere
While a segment of automotive consumers continue to demand hybrid and electric vehicles, larger vehicles have come back in favor. “Americans are taking this break in gas prices not just as a chance to save on gas, but as a chance to afford what they want,” Sweeney says. “I think there is an expectation that large vehicle production will continue. I also think the automakers are sensitive to MPG ratings, not just for the market, but there are federal targets they need to meet.” He notes one method to achieve fuel efficiency is through the “lightweighting” of cars. Examples include Ford’s F-150 aluminum-alloy body and steel frame, as well as the increased use of carbon fiber materials in vehicles. 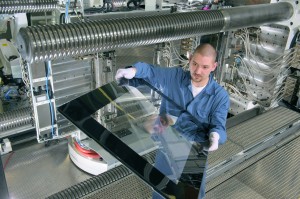 A number of advances in lightweighting were on display at the “North American International Auto Show” held in January in Detroit. Advances included the F-150’s first-of-its-kind LED headlamps made with a special optical grade of polycarbonate. The single-collimator, all-plastic molded lens are used for both low and high-beam LED headlamps. Ford says the headlamps are half the weight of the previous version, and allows the company to lower production time.
Another technology, which touches everyone in the industry, is a polyurethane exterior coating to paint cars in a one-step curing process, says Gina Oliver, senior director, automotive plastics, American Chemical Council Inc.’s (ACC) Plastics Division. Not only does the technology cut down on the number of paint applications, it also uses less energy and fewer man-hours.
Oliver says the material for both the LED headlamps and the paint technology were developed by Bayer MaterialScience LLC.
Also on view at the auto show was the first transparent adjustable fin on a commercial vehicle that allows rear visibility through the fin. The fin can be found on the Chevrolet Corvette Stingray Z06 sports car. The polycarbonate blend fin improves vehicle handling and control by increasing downforce without impeding or blocking the driver’s line of sight through the rearview mirror. With the fin there is a 40 percent weight reduction, and a 60 percent cost reduction versus metal designs. The material supplier for the fin is SABIC.
Another material supplier contributing to lightweighting is SGL Automotive Carbon Fibers LLC. Sweeney’s firm consulted on the site location of a joint venture between the SGL Group and BMW for the SGL Automotive Carbon Fibers facility, which is located in Moses Lake, Wash. The company produces carbon fibers for use in the BMW i series of vehicles. The i3 is an all-electric vehicle with a chassis made from carbon fiber reinforced plastics. The vehicle’s design excludes the center pillars, or b-pillars, between the two doors, creating clamshell or coach doors.
SGL Automotive Carbon Fibers’ carbon fiber spools are sent to Wackersdorf, Germany, where they are processed into carbon fiber fabrics. The carbon fiber fabrics are then cut, stacked and resin treated at the BMW sites in Landshut and Leipzig. The joint venture is located at the ASPI Tech Park in Moses Lake. The company has constructed a second building that will allow it to double capacity.
“The lightening of the vehicle will continue, particularly as electrics and hybrids become more established, because that directly impacts their efficiency,” Sweeney says.
To achieve the Corporate Average Fuel Economy (CAFE) standards, auto manufacturers have traditionally produced smaller vehicles. But with “Joe Consumer” interested in buying larger vehicles, OEMs will have to get serious when it comes to reducing the weight of vehicles through the use of lightweight materials, Oliver says. “There is work to be done to find more and more cost-effective ways to cut weight from vehicles, in particular in larger segment vehicles if gas prices remain low.

Alabama’s Auto Sector’s Superior Talent
In a state that produced 915,000 vehicles in 2013, a skilled workforce and the training resources required to keep workers up to date is crucial. In Alabama, AIDT is the leading state-funded workforce organization.
Alabama is ranked fifth in the United States for the number of vehicles manufactured. Since 1993, when Mercedes-Benz announced it would locate an assembly plant in Alabama, the state’s auto OEM cluster has expanded to include Honda and Hyundai. Also from Alabama, Toyota builds four, six and eight-cylinder engines.
AIDT offers businesses comprehensive pre-employment selection and training, post and on-the-job training, assessments in maintenance and process improvements, and leadership development.
AIDT also has industry-specific training centers including robotics, maritime industries, manufacturing and IT. The automotive industry is supported by training infrastructure that includes: the Bill Taylor Institute in Vance for Mercedes Benz; the Training Center Honda Manufacturing Alabama located in Lincoln for Honda; and the Training Center Hyundai Motor Manufacturing Alabama in Hope Hull for Hyundai.
The services from AIDT have been certified ISO 9001:2008, the world’s first such certification for a state-funded workforce training program. The organization continues to conduct upgrades based on needs. A developing change is the addition of RTP phase 3, a response to paint technology workforce requirements.
To learn more, visit www.aidt.edu.

“We are seeing record production levels being reported now, and forecasts find 2015 will be an even bigger year,” Oliver continues. OEMs have begun looking beyond components and chassis as places to make cuts. The next place to lower weight is in the structural space, Oliver says. The ACC has partnered with George Mason University to conduct research in this area. Research is also underway to address challenges with predictive computer modeling, and multi-material joining.
“We are working with Michigan State University at its Composite Vehicle Research Center on research that will provide multi-materials joining technology solutions; so plastics and polymer composites with metals,” Oliver says. “We want to demonstrate how the solutions can be implemented within the current manufacturing assembly environment without having to implement large infrastructure changes.”
Nondestructive testing is also essential. Case in point is with the F-150, in regard to repair issues. “Joining is an issue because how do you take it apart and put it back together,” says Rob Krebs, director, market innovations, ACC. “How do you repair a vehicle that is made of carbon fiber parts or carbon fiber parts stuck to a steel component; how do you reverse the bonding?”
“The repair shop needs to be able to test that component part or assembly with confidence,” Oliver says. “If not, then they have to assume that the structural integrity has been breached, so they take it off and replace it. It may not need to be replaced.” Solid, usable, nondestructive testing methods and technologies should be available to repair shops.
Oliver also points out along those lines is nondestructive evaluation, evaluating potential issues. 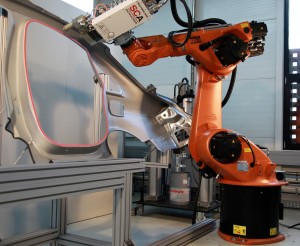 A precise robotic arm distributes a pre-calibrated polymer material to the inside of an automotive panel before additional components are attached. Photo: Dow

Another resource in advancing lightweighting research is the Institute for Advanced Composites Manufacturing Innovation, which will focus on fiber-reinforced polymer composites for use in industries such as aviation and automotive. In January, the University of Tennessee in Knoxville was selected to lead the public-private partnership. The institute is funded with a $70 million award over five years from the U.S. Department of Energy, and $189 million from the institute’s partners. “The institute will go a long way in providing the groundwork in order for manufacturers to lightweight more with plastics and polymer composites,” Oliver says.
Everyone is Working to Meet CAFE
There is a tremendous increase in the technical sophistication of vehicles, and while OEMs talk about the power of their new engines, they also talk about fuel efficiencies, Sweeney says.
The industry is also looking into the changing dynamics in how consumers view cars. Many urban professionals don’t own cars, or don’t want to own cars. And if they have cars, they don’t use them, preferring to move by mass transit or bikes, for example. Industry insiders envision urban environments where cars won’t be needed. Groceries will be delivered by an unmanned vehicle, and autonomous cars will rule the road.
“The idea is Uber, Zipcar, Internet technology, a concern about being green among the younger generation, and the high cost of keeping a car in an urban environment — I think all of those things will trend toward fewer people owning cars,” Sweeney says.
Whether or not that means fewer cars on the road or how big of an impact these trends will have on overall auto production remains to be seen. After all, autonomous cars and the infrastructure to support them, still has to be built. “This is a multi-year vision, not a short-term impact,” Sweeney says. “I think the nature of driving will change, especially in urban areas. For example, when BMW came out with the i3, they didn’t talk about driving but about mobility.”
The nation’s planners are broadening the concept of how to move people from one place to another, particularly in urban environments, in the most efficient, environmental friendly and economic way. “There are a lot of uncertainties in the market, but in general, in terms of particulars, the general feeling is that 2014 was a good year and that 2015 will be another good year,” Sweeney says.
For complete details, visit: