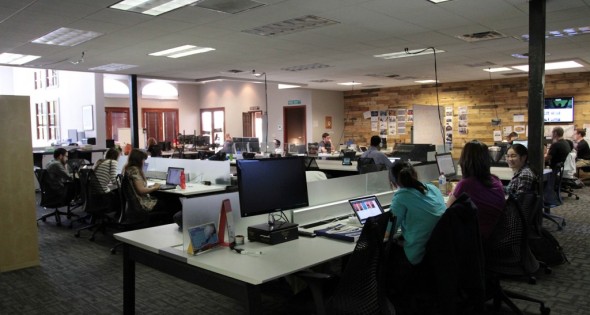 Hubs assist the “dots” in connecting with each other.

The re-emergence of America’s downtowns is luring talent to once again work in, live in and play in these sections of town. In the middle of it all are co-working spaces and hubs, where entrepreneurs and startups gather to support each other, leverage resources such as entrepreneurs in residence, and most importantly, prove their ideas in the hopes they will move into incubation facilities in the community to further grow their ventures.
“The purpose [of co-working spaces] is to keep talented young people graduating from the universities and college in Riverside connected and rooted in our city,” says Riverside, California’s Mayor Rusty Bailey. When he took office he invited entrepreneurs to get involved in forming a co-working space in the city’s downtown.
It so happens a group of entrepreneurs had been regularly meeting at a local coffee shop, each putting $100 in a jar each month to support their fledgling efforts. “The mayor and the city helped facilitate finding a space in downtown so this group could continue to meet,” says Kevin Carrington, founder and CEO, Carrington Industries, who had joined the original group meeting at the coffee shop. “The monthly dues allowed us to move into that space.” Bailey says the city awarded the group $10,000 to start a co-working space on Main Street. 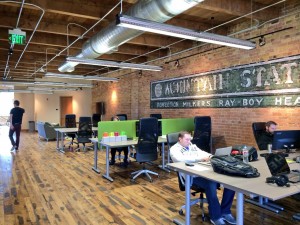 Co-working spaces are often run by the community within the space. These spaces provide affordable work spaces for entrepreneurs, typically providing desks, chairs, open floor plans, Wi-Fi services, shared services, access to conference rooms, and other amenities. The majority of hubs are connected to mentors, serial entrepreneurs and/or funding resources, which is vital to companies that are somewhere between the idea and the proof of concept stages.
At Riverside.io, the “ecosystem is friendly for any tech company that is trying to get off the ground, or if you want to be part of a tech community working on a project or if you want to be among developers and hackers,” Carrington says.

The majority of hubs are connected to mentors, serial entrepreneurs and/or funding resources, which is vital to companies that are somewhere between the idea and the proof of concept stages.

Connections and Alliances
The collaborative synergies in these spaces are perhaps the most valuable benefits to entrepreneurs. For instance, at the Coachella Valley Innovation Hub (CViHub) in California, EV Enterprises LLC manufactures circuit boards for use in energy management and storage. The company also prints circuit boards for four other companies involved in the CViHub. “The company has electrical components on site and translates these companies’ electrical needs onto a board design and makes their boards for them,” says Joe Wallace, chief innovation officer, CViHub. “They don’t have to leave Palm Springs to get their electronic needs met. EV Enterprises didn’t set out to do this; it happened because of networking.”
The CViHub was chartered by the cities of Cathedral City, Desert Hot Springs and Palm Springs, and is managed by the Coachella Valley Economic Partnership.
At Riveside.io, Carrington partners with tech companies located in the facility to provide mentoring to students who participate in Carrington’s STEM events. Carrington designs and produces luxury tech accessories for mobile devices, using a portion of the funds, once a quarter at this point, to sponsor STEM education-related events for the community’s youth, which struggles with a high rate of high school drop outs.
Last May, the company held an event where students launched model rockets at a local park, and then moved to Riveside.io to write launch sequence codes. “Many of the companies in Riverside.io look to us to help with their community giving back initiatives by mentoring these young people,” Carrington says. “We have the best time coming up with ideas for what C3 [Carrington Case Code Day] is about.”
“It is in our core values to create collision, co-working, connectedness and co-learning,” says George Moncrief, entrepreneur in residence of Work In Progress, a co-working hub in downtown Las Vegas, Nevada. The 10,000-square-foot renovated space is owned and operated by the VegasTechFund. The co-working hub has 200 members, 150 of which are active. The building houses 40 companies to 50 companies — the facility is open 24/7 and follows a drop-in format. Part of Moncrief’s role with the VegasTechFund is to vet companies and recommend them for investment.

“I wouldn’t necessarily say our community is unique but most of our members, and the Las Vegas tech community, have a bias toward collaboration, and it is amazing to see it,” Moncrief says. “It is different than in most communities I have landed in.” Work In Progress leaders have formed relationships with many of the conferences and trade shows that land in Las Vegas. Members are given free or discounted rates to attend events that are applicable to startups.

City Centers Inspire Innovators
Moncrief says being located in the footprint of the Downtown Project, a $350 million revitalization effort led by Zappos.com’s CEO Tony Hsieh, provides not only walking access to restaurants, bars and live music venues, but also to learning experiences. “We are also active in helping out with STEM education,” Moncrief says. “We are connected with the colleges and the local school district. We open our doors to them to use our space free of charge; and we invite them to our events.”

Work In Progress leaders have formed relationships with many of the conferences and trade shows that land in Las Vegas. Members are given free or discounted rates to attend events that are applicable to startups.

Carrington says, “being in downtown Riverside is amazing,” of Riverside.io’s location. The space moved into a bigger facility last year, moving from Main Street to Market Street. “They have grown to 33 members and a new space, and have a goal to get to 50 members,” Bailey says. “They host many meetups a year and they have approached me about wanting to do a hackathon here.”
“The support we are getting from the mayor and city’s tech ombudsman has been phenomenal,” Carrington says. “They really want us to stay in downtown Riverside and we want to stay in downtown. We will usually head out in herds to go to lunch. They [downtown merchants] have come to know us well.”
In Ogden, Utah, Startup Ogden is located downtown in a renovated 18,000 square foot, three-story building. The co-working spaces are located on the top two floors, open 24/7, comprised of a classroom, open floor space, lockers, showers and conference rooms. The bottom floor is a retail space for Weber State University; Weber State owns the building, which is a 100-year old facility that has undergone a $3.5 million renovation. A one-time federal grant helped with the purchase of the facility.
“Students come down for free and hang out in the space,” says Alex Lawrence, vice provost of Weber State University. He is in charge of the entrepreneurship program at the university, which is available to any student, no matter their major. “There are events every week at the space ranging from hackathons, lunch sessions, speakers and conferences,” Lawrence says. “It is a unique place and there is nothing quite like it in Utah. And it is unique in the nation in terms of price point.”

Make It Work
In fact, Lawrence says Startup Ogden is an unbelievable bargain in price, and has a waiting list of startups eager to access the space. Much like other co-working spaces, members are not required to sign long-term leases, but rather sign up for spaces on a month-to-month basis. Desk rental space is $50 a month for nonreserved, and $75 for a reserved space, with access to the conference rooms. Usage of a reserved space, conference rooms, as well as the lockers, the showers, and mail service, runs $99.
Lawrence says there are no paid employees at Startup Ogden, which is managed by the community. The community also decides the events. “It is important to create a strong feeling of ownership so there are not rules pressed down on entrepreneurs,” Lawrence says. “You need to get them involved early so that it is not a government or university related bureaucratic process, but a community oriented process. Those are hard things to do but need to be done in order to be successful and embraced by the community, and have the longevity it needs to make it work.

“There are events every week at the space ranging from hackathons, lunch sessions, speakers and conferences. It is a unique place and there is nothing quite like it in Utah. And it is unique in the nation in terms of price point.” – Alex Lawrence, vice provost of Weber State University.

“Financially, it is interesting,” Lawrence continues. “The facility is totally paid off. We don’t have to ask for money. It pays for itself with the memberships and rent the campus store pays. Some of these co-working spaces that rely on funding from outside groups, or a city or government agency, struggle because that funding can be fickle.”
Moncrief says one of the goals in 2015 at Work In Progress is to focus on the profitability of the space so that it is more self sustaining, potentially leading to growth. “We are also focused on doing more outreach with our mentor office hours, which have been well received,” he says.
In Riverside, Bailey says the community is working on lining up capital sources to support entrepreneurs due to the fact that most of the venture capital in the state is concentrated on the coast line. A local bank has created a subsidiary focused on venture capital investments; however, they are looking at more than startup companies. For the time being, “we are having to rely on these entrepreneurs and their meetup events,” Bailey says.
Bailey says the city of Riverside has invested in amenities that the creative class economy has come to expect, which includes a safe and clean downtown. “We invested $1.6 billion between 2007 and 2012 in the Riverside Renaissance Project, which funded capital improvements in parks, roads and bridges, predominately downtown, including $60 million for our historic Fox Theatre. Our Main Street Mall and convention center were also remodeled.”
In another effort, the Riverside Community College District is conducting a $50 million improvement effort across the street from the co-working space. The reinvestment will support the school of arts, the culinary arts and the headquarters for the district. 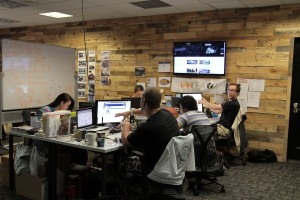 “This will be an interesting connection for them as more students connect to the urban downtown,” Bailey says. “Most cities in Southern California can’t say they have an urban downtown.
“And tonight [November 12] we are opening up the Riverside ExCITE incubator, which is collaboration between UC-Riverside, the city of Riverside, the county of Riverside and the private sector,” Bailey continues.
In Palm Springs, a big push in 2015 will be attracting companies to a new 12,000 square foot health and medical innovation center, which has three companies lined up at this time. “The Desert Healthcare District awarded us with a half a million dollars; half for the construction and refurbishment of the old building, and the other half for operations the first three years,” Wallace says.
In Ogden, Lawrence has noticed that private property owners downtown have been inspired by the renovation of the building where Startup Ogden is located. “We are starting to see more development, including new buildings and the refurbishment of others,” he says. “The building next door to us is a bank, which just finished a remodel.” Another building, which sat empty for a number of years, will be the home of a technology company relocating from an adjacent area.
Lawrence says, “Over the last five years there has been a resurgence of activity with new restaurants, and retail and housing options, and I think we are a key part of that.”