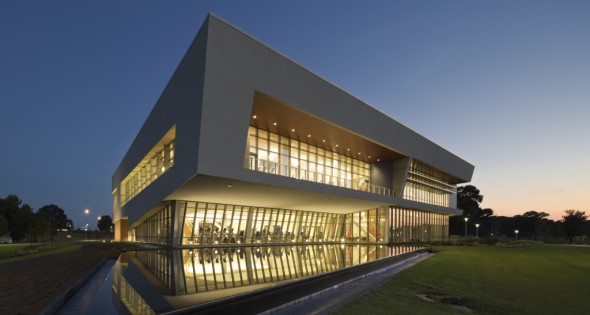 One of the key reasons people cite for being attracted to or staying in a community is having a rich variety of entertainment and recreational options. As consumer spending regains momentum, sports facilities and entertainment districts have emerged as one of the fastest-growing venues for bringing in outside dollars enriching life for existing residents.

On the outskirts of Chicago, providing a broader variety of entertainment options is not only delighting residents and visitors, it’s a strategy that local employers also find attractive.

“Improving the quality of life in ways that people want today, is a way to support our local talent base, which employers really like,” says Matt Frank, economic development manager, Village of Schaumburg, Illinois. “We’re looking to create a special walkable, pedestrian-friendly environment that caters to all sorts of people, including the daytime population of corporate workers and convention visitors. They’ll be able to eat, shop and be entertained and also take advantage of amenities like green space, trail systems and forest preserves.” 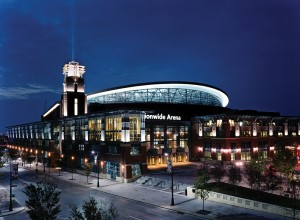 As the centerpiece of the country’s first fully integrated mixed-use sports and entertainment district, the 18,500-seat Nationwide Arena in Columbus, Ohio, is an innovative venue that provides a great game-day experience for fans.
Photo: Courtesy of HOK © Timothy Hursley

Similar forces are at play in nearby Arlington Heights, where expanding beyond existing retail and services is helping the area become a serious entertainment destination in the greater Chicago area.

“We’re home to Arlington Park International Racecourse, which makes us unique, but developing great amenities that people from young professionals to older retirees can enjoy is a significant and growing part of our local economy,” says Michael Mertes, business development coordinator, department of planning and community development, Village of Arlington Heights, Illinois. “It’s really about having a big city in the suburbs feel, so you don’t have to trek down to Chicago to eat at a great restaurant, shop at a unique, independent store or see live theater and music.”

Up-and-coming local venues like the Star Cinema and Metropolis Performing Arts Centre are bolstered by two interstate highways, a commuter rail line, proximity to O’Hare International Airport, and a diverse array of housing, retail, office and industrial space, Mertes says. That’s captured the interest of private developers who are now in the midst of constructing a 40-acre mixed use development whose first phase — dubbed One Arlington — will feature a 250-unit apartment building surrounded by a variety of retail, restaurant and entertainment options. 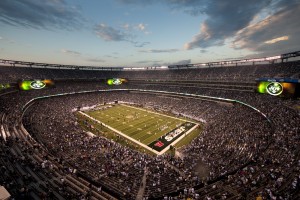 The MetLife Stadium for the New York Jets and Giants in East Rutherford, New Jersey, creates an innovative and immersive experience for fans, sponsors and players.
Photo: Courtesy of HOK © LaCasse Photography

One of the most visible approaches to promoting urban revitalization by developers, municipal leaders and other stakeholders is the creation of mixed-use entertainment districts anchored by sporting venues.

According to global architecture, engineering and planning firm HOK, rapidly-evolving expectations are leading designers to reimagine how sports, recreation and entertainment venues can attract more people and create even more memorable experiences.

“With stadia and arenas hosting more entertainment events, they can act as catalysts to invigorate urban districts or to attract people to a region,” noted Bill Hellmuth, president, HOK, in a recent public statement. “These venues need to be integrated with neighborhood facilities including hospitality, retail, residential and office space.”

One of the most successful examples of such integration is a 100-acre, mixed-use district which helped transform downtown Columbus, Ohio, by catalyzing approximately $1 billion in development around Nationwide Arena. The company also points to the Kansas City, Missouri’s Sprint Center, and Edmonton, Alberta’s new Rogers Place arena as prime examples of how today’s urban downtowns can be transformed, thanks to growing interest in sports.

Upgrading existing assets to attract special sporting events is underway in Ajax, Ontario, which will be the host site for approximately 80 baseball and softball events of the 2015 Toronto Pan American and Parapan American games taking place this July. 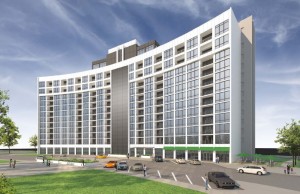 “For us, sports and entertainment tourism is one of the fastest-growing sectors in Ontario,” says Lisa Hausz, manager of business development and marketing, Town of Ajax, Ontario. “Recognizing this back in 2010 helped us attract and be prepared for being included as a site for the Pan Am Games. We’ve been involved with baseball for a very long time, so we’re extremely excited that we’ll be hosting more than 125,000 visitors including athletes, officials and guests from around the world.”

Hausz says preparations included investing a significant portion of the Ajax’s capital and infrastructure reserves to transform the town’s Sportsplex park into today’s Pan Am Ballpark.

“We had available space, good fields, hotels, the Ajax Convention Centre and a good location 30 minutes east of Toronto along the Highway 401 ‘Corridor of Commerce,’ but our biggest asset was our partnerships” Hausz says. “Working closely with the local coordinating committees, along with provincial and federal government from the onset helped us support the investment side and positively involve the surrounding neighborhoods.”

Opportunities on the sports side are not limited to just high-profile events.

Industry followers estimate that at least 35 million children between ages five and 18 currently play an organized sport each year in the United States. Of that, 21 million are involved in non-school youth sports, which have been expanding at an accelerating pace.

“Although sports development — in the youth segment, in particular — is still continuing to emerge and grow, it’s a powerful tool for attracting people to an area, often leading to development and revitalization,” says Jason Clement, founding partner and COO, Sports Facilities Advisory and Sports Facilities Management (SFA|SFM). “It was one of the few segments in the travel industry that did not pull back during the recession.”

While consumer tastes are changing, more families aspiring to the travel circuit and municipalities looking to incorporate sports entertainment and development as a magnet, this is happening in lockstep with the ongoing privatization of sports in an era of budget cuts. That means rethinking traditional role of parks and recreation, Clement suggests.

He points to the Rocky Top Sports World facility in Gatlinburg, Tennessee — which is on pace to attract more than 20,000 athletes to the tourist town in its first year — as a project built to take advantage of the current boom in sports tourism, without burdening local resources. Another SFA|SFM venture worth watching, Clement says, is the Myrtle Beach (S.C.) Sports Center, which features space that offers a wide range of indoor sports, and capacity for trade shows and conventions. The $12.4 million facility, located adjacent to the Myrtle Beach Convention Center, was nearly sold out for its first six months by last November.

Over in Branson, Missouri, which is already a well-known shopping, hospitality and entertainment destination, a proactive approach in enhancing local assets is helping redevelop the city and diversify its visitor profile.

“When we looked at the success of the Branson RecPlex and our outdoor recreation and sporting events, but realized that we were maxing out our capacity, we decided to go after the full potential of what the growing sports market could do for enhancing our tourism industry,” says Jonas Arjes, executive director, Taney County (Mo.) Partnership. “One of our big draws compared to other areas involved in summer youth sports and tournaments, is that an entire infrastructure of family-friendly accommodations and activities already exists here.” 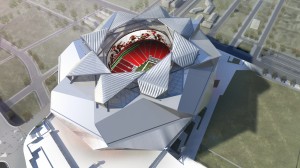 The design for the New Atlanta Stadium features a retractable roof that provides a radical departure from the kinetic roofs of other sports facilities.
Image courtesy of HOK

Capitalizing on the area’s central location and the increase in youth sports is Ballparks of America, which has invested more than $25 million in repurposing a former mall into 16 baseball fields, six of which are replicas of iconic parks like Bush Stadium, Wrigley Field and Fenway Park.

“When built out to a full capacity of 128 teams playing per week, over 12 to 13 weeks out of the summer, the economic impact will add up pretty quick,” Arjes says.“Building up baseball, golf and other ongoing events is going to require more investment, but I think the future is bright.”

As increased consumer attention and spending on entertainment and sports continue to drive both market segments upward, potential communities and host organizations have a lot of upside, Clement says, but they need to get more creative and innovative about programming, and plan their branding and marketing carefully.

“Even for areas that don’t have an established reputation for sports or entertainment, it’s a very compelling niche when looking for ways to attract people and bring in outside dollars,” Clement says. “But to take advantage of it, they must provide a unique reason for people to come, then brand the experience properly, whether it’s as a center for tournaments or a family activity destination.

“Both industries continue to grow, but we’re watching very carefully for market saturation, as developers and communities seek to capitalize on all this growth,” Clement continues. “After all, there are only so many particular events you can hold at one given time in a specific region or driving radius.”

Thinking ahead, Ajax’s Hausz points out that being a successful event host is just the beginning of a larger effort to sustain economic returns from sports tourism, once the dust settles after July.

“We’re going to use this experience to solve some of the chicken and egg challenges of economic development — that you need visitors to attract new ‘product’ and new product to attract visitors,” she says. “We want to be able to say to future organizers that having hosted a world-class event, we can host other national and international events as well. Being able to leverage success with Pan Am will have put us in a really good place.”