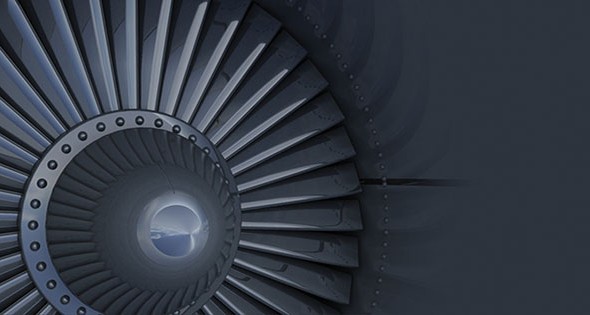 Driven by technological advances and global interest, here we grow.

The aerospace industry continues is rapid ascent, as always, on the cutting edge of new technology that is now ramping up across the country.

According to a report from a technology and development company, EWI, “Aerospace Trends and New Technology Developments,” Boeing plans to invest more than $1 billion in automation over the next few years to boost production at its assembly plants.

Commercial space growth is also on the radar for future expansion, with a growing list of entrants following the lead of such innovators as Elon Musk’s SpaceX and Richard Branson’s Virgin Galactic.

There are plenty of new technology discoveries to consider.

Carbon fiber bearings are used in the European Airbus A340’s horizontal tail to reduce its weight by 50 percent and its cost by 30 percent.

On the supply chain side, AM has helped companies reduce warehouse management and inventory obsolescence costs by manufacturing parts on-demand and reducing the overall time-to-market.

Aerospace manufacturers have found that ultrasonic-assisted machining, which applies intense vibrations to conventional metalworking tools for altering the frictional characteristics of the cutter and material being removed, offers significant reductions in heat generated by the cutting process, greatly enhancing the machinability of advanced aerospace materials.

Status of the big two – Airbus and Boeing

The Airbus Orders and Deliveries division reported that, in 2017, the company logged orders for four jetliners from its A330 and A350 XWB widebody families in July, while delivering 47 aircraft from across its current-production single-aisle and widebody product lines during the month.

The new business in July involved three A330-200s for International Airlines Group, along with one A350-1000 for an undisclosed customer.

Taking these transactions into account, along with conversions and cancellations, Airbus overall net orders for the first seven months of 2017 totaled 205 jetliners.

Meanwhile, Boeing’s Orders and Deliveries report found that Boeing had 443 orders this year through July, 2017, led by 306 orders for 737s. There were five 737 Max deliveries in July – 11 for the year so far.

The search for the right workforce 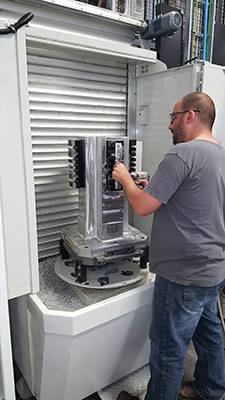 Machinist at P&J working at the loading station of a Matsuura 500 Cell System. Courtesy of P&J Machining.

The Aerospace Industries Association (AIA) reported that, in 2016, the industry supported 2.4 million American jobs. Of the total jobs supported in 2016, 845,500, or 35 percent, were attributable to firms producing end-use goods and services – such as aircraft, space systems,

land vehicles, ships, armaments and cyber – while the remaining 1.6 million, or 65 percent, were attributable to the industry’s supply chain.

According to a report by Deloitte, “2017 Global Aerospace and Defense Sector Outlook,” the growth of the industry is steady but not necessarily surging forward.

For example, the global aerospace and defense sector is likely to experience stronger growth in 2017, following multiple years of a positive, but a subdued, rate of growth.

Deloitte forecasts the sector revenues will likely grow by about two percent this year.

Commercial aerospace subsector revenues are likely to remain flat, experiencing only a 0.3 percent increase – marginal growth expected as aircraft production recovers in 2017 after a slowdown in 2016.

Total global demand for new aircraft production over the next 20 years is estimated to be 35,155 aircraft (excluding regional jets).

With such growth expected, there are three significant trends and challenges to consider: the attractiveness of this market, the resulting entrance of new global competitors to the existing duopoly, and the impact on the supply chain.

As reported by Deloitte, after an unexpected slowdown in anticipated production in 2016 to 1,360 units, it is estimated that 1,456 commercial aircraft will be produced in 2017, which is a 7.1 percent increase over the estimated 2016 production, and a 22.5 percent increase in annual production compared to five years ago.

per month, citing weak demand for its largest aircraft. Boeing has also disclosed that it is reasonably possible that it could decide to end the production of 747-8 should it be unable to obtain sufficient orders.

One area of the country that has expanded their footprint in aerospace is Pierce County, Washington, basically in support of the large Boeing plant in Everett, Washington.

Pierce County is in the greater Seattle area, and home to Mount Rainier. Everett is 25 miles north of Seattle. “I think we represent the natural growth of their supplier network,” Denise Dyer, director of the Pierce County Economic Development Department, says. “We have been really able to capitalize on that.”

What is also remarkable in the area is the development of many home-grown companies that have developed niche work as Tier 1 and Tier 2 suppliers to Boeing, she says. “That’s everything from advanced materials to machine shop work to materials testing to finishing,” Dyer says. “We think of ourselves as a sort of Boeing shop floor.”

One of those companies is Toray Composites America, making a carbon fiber prepreg device that becomes part of the Boeing 787.

Pierce also has companies that are working in assemblage, where they essentially put parts inside other parts and ship them off to Boeing.

The area has a lot of industrial land available. But one of the critical elements of a successful aerospace cluster – workforce – is in the county, courtesy of one of the largest U.S. Army-led joint bases, Lewis-McChord. “We have thousands of soldiers and airmen that transition out of the military each year, which makes for a phenomenal workforce for us,” Dyer says. “You have folks that understand teamwork, they understand project development, they understand chain of command. So if we can get them a job here, they tend to stay here.”

A military base also plays a crucial role in the economic development of another county in the country’s northwest, Kitsap County, occupying most of the Kitsap Peninsula west of Seattle across Puget Sound, which is home to the Navy’s Puget Sound shipyard and intermediate maintenance facility servicing both aircraft carriers and submarines.

The U.S. Navy is the area’s largest employer. “The Navy is the heart of our economy,” John Powers, executive director of the Kitsap Economic Development Alliance, says. The base employs 40,000 between servicemen, civilian and defense contractors. The shipyard is the second largest industrial complex in the Pacific northwest, Powers says. “We are leveraging our technology and workforce skills and the manufacturing skills from our defense industry into aerospace, and into space,” he says. “We have much to offer the space industry.”

There are currently about two dozen aerospace companies in the county, he says, with the largest being Kitsap Composites. That company manufactures shields for the communications apparatus on airplanes. “We are getting interest from other aerospace companies and space companies looking over what we have to offer with the workforce and the land,” Powers says. “The primary growth is coming in machining, in CNC operations, engineering services and then the growth of composites.”

On the other side of North America, in Mississauga, Ontario, near Toronto, the aerospace manufacturing sub-sector is the largest across all major Canadian centers by total employment and number of businesses, according to Susan Amring, director of economic development for the City of Mississauga.

Amring says the city is home to over 320 aerospace companies, and over half of the world’s top 25 aerospace companies have operations in Ontario, including Cyclone Manufacturing, Inc., Magellan Aerospace Corp., Mitsubishi Heavy Industries Canada Aerospace Inc. and Honeywell.

Toronto Pearson International Airport in Mississauga is undergoing initial steps to become one of the world’s next top tier international airports, providing air connectivity to as much as 80 percent of the world’s economies, Amring says.

The first phase of the proposed regional transit center is expected to be completed by the mid-2020s.

As the overall commercial aerospace market grows both nationally and internationally, new aircraft production programs are emerging from other regions, particularly in China and Russia.

Although China has been attempting to produce and deliver a domestic manufactured commercial aircraft for nearly four decades, it has not seen great success.

However, these new entrants will face multiple challenges, including procurement of orders from established carriers, risk of budget and schedule over-runs in product development, as well as delays in establishing a track record of reliable, safe, and trouble-free operation.

The aerospace supply chain is expected to continue its transformation to reduce costs, respond quicker and to invest more in product innovation, which may result in further industry consolidation as some of the smaller companies may not be able to meet the increased financial, program management, skills, risk-taking and investment requirements, according to the Deloitte report.