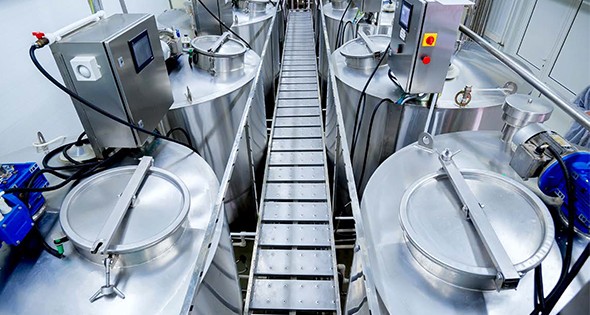 Tomorrow’s foods are being manufactured today with fewer actual animal parts and more plant-based ingredients for a better natural health experience with less potential for allergic reactions; in response to national trends about the treatment of animals; and to shake up the consumers perception of the range of possible products (Mustard-flavored ice cream? Yes, it’s available).

This “disruption” in what we eat and how it is processed is changing the way food is being marketed and sold, with nods to certain diet restrictions.

Academia is leading the charge on the food processing disruption. At the Value-Added Food Labs at Kansas State University, courses are taught about value-added agricultural products, which are raw commodities made with ingredients or processes that make them more attractive to the buyer or more readily usable by the consumer, such as a high fiber breakfast cereal from wheat, or adding a marinade to a cooked beef steak and selling it in a microwaveable package.

These processes create new jobs and keep more dollars in a community. In addition, the profit margin of a value-added product is generally higher than that of a raw commodity.

The changes in the consumer demands for the new and better foods are slowly filtering down to the over 30,000 food and beverage processing plants owned by about 25,800 companies, according to the most recent comprehensive data in the Census Bureau’s 2016 Economic Census.

These plants employed more than 1.5 million workers in 2016 (about 14 percent of all U.S. manufacturing employment and just over 1 percent of all U.S. nonfarm employment). The meat processing industry employed the largest percentage of food and beverage manufacturing workers in 2016 (31 percent), followed by bakeries (16 percent), and fruits and vegetables (10 percent).

In a report by the USDA, “Thinning Markets in U.S. Agriculture,” U.S. agricultural production is growing more concentrated or thin (few purchasers, low trading volume, and low liquidity), reviving longstanding tensions between producers and processors and raising concerns that producers may not be getting a fair price due to less competitive market conditions.

According to the report, there have also been concerns that low trading volume and liquidity in thin markets could lead to heightened price volatility due to impaired price transparency and price discovery (how new information about supply and demand affects market prices). Reduced price transparency also complicates USDA’s efforts to administer price support and crop insurance programs in thin markets.

In reality, most agricultural processors are forward looking; in other words, they consider their profits over the medium and long run. Food processors have substantial incentives to form mutually beneficial, long-term relationships with producers, and pay at least the price that would be generated by a competitive market. This keeps their favored suppliers in business, ensures efficient processing, and a stable supply of outputs for their own buyers, according to the report.