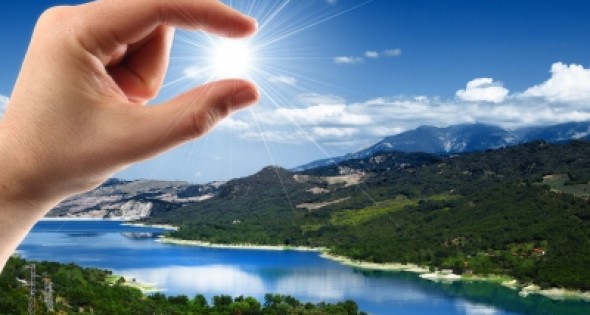 Solar Powers Up for the Year Ahead

Solar energy industry sets its sights on a record-breaking year.

Following a record-breaking year of activity, solar power continues to be the fastest-growing source of renewable energy in America, thanks to a combination of increased innovation, favorable legislation, a growing desire for energy security and self-sufficiency, and a continuing focus on curbing greenhouse gases.

According to the Solar Energy Industries Association (SEIA), through Q2 2014, solar represented over 40 percent of all new electric generating capacity installed in the U.S this year. Last year, solar accounted for 74 percent of new electric generation capacity. By the end of 2015, the SEIA estimates that there will be more than 30 gigawatts of combined photovoltaic (PV) and concentrating solar power (CSP) capacity in the United States — enough to power more than 5.8 million homes.

Last year was a particularly big one for CSP projects, with 410 megawatts installed, and 2014 shaping up to be even bigger with 857 megawatts expected. After an absence of major CSP projects projected to come online in 2015, 780 megawatts worth of CSP are scheduled for 2016.

Yet not all of this growth has seen smooth sailing. More than 3 gigawatts of the projects currently in the American PV project pipeline had been set to use Chinese modules, according to the latest NPD Solarbuzz United States Deal Tracker. With the recent anti-subsidy and anti-dumping tariff rulings proposed by the U.S. Department of Commerce, companies may have to find other suppliers or potentially pay higher prices for those modules.

NPD further reports that approximately half of the domestic PV project pipeline is composed of ground-mount systems — many of them large-scale. While traditionally these have been attractive due to economy-of-scale savings, many could face challenges in the form of cost increases stemming from the U.S. trade investigation.

“Recent developments in the industry have been less about improvements in technology and more about financial innovation — using new financial tools to open up sources of capital in the solar marketplace.”- Ken Johnson, vice president of communications, SEIA.

“Large-scale ground-mount PV installations are particularly vulnerable to cost increases and potential disruption, as many have signed power purchase agreements at aggressive rates,” noted Michael Barker, senior analyst, NPD Solarbuzz, in a recent industry analysis. “Any increase in cost for the projects could mean renegotiation, delay or even termination.”

Yet, as Frost & Sullivan noted in its recent Global Solar Power Market report, although large-scale ground-mount PV installations are particularly vulnerable to potential cost fluctuations, the United States nevertheless has become a lucrative destination as the price of solar PV systems has declined.

Indeed the total market demand and the size of the project pipeline continues to grow in the United States, led in large part by California, though Nevada, North Carolina, Arizona and other states now also have plans for multigigawatt projects. There is also increasing interest from states that have not previously seen significant solar activity, such as Utah and Minnesota, but have recently announced plans for several hundred megawatts of new solar PV installations.

“People are becoming more educated about how solar works and what their options are, so even though the skirmish between U.S. and Chinese stakeholders is definitely grabbing headlines, it doesn’t look like it’s going to jack up prices through the roof or grind the industry to a halt,” Konold says. “If anything, as more states implement programs such as net metering or net billing, we’ll see prices continue to fall.”

Among the other major drivers of solar power’s growth are advances in the nontechnical side of the sector, says Ken Johnson, vice president of communications, SEIA.

“Recent developments in the industry have been less about improvements in technology and more about financial innovation — using new financial tools to open up sources of capital in the solar marketplace,” Johnson says. “The growth of third-party leasing and power purchase agreement models, as well as recent attempts at securitization of solar assets and the development of solar “YieldCos” have all had huge impacts on the marketplace by tapping into new sources of capital. As the industry continues to grow and mature, financial innovations will continue to play a major role in moving the industry forward.”

Industry collaborations and partnerships are also a key contributor to the uptick in solar projects across the country.

“There is constant growth in our part of the industry and it’s rising quite fast,” says Mauricio Añón, marketing specialist at Inovateus Solar, a worldwide developer and installer of commercial and industrial solar power systems. “Our forecast for 2015 includes a bigger pipeline of projects that will involve working with other companies to build solar capacity.”

In terms of community support, smart public policies — including the solar Investment Tax Credit, net metering and state renewable portfolio standards — are keys to continuing the advantage of clean, renewable solar energy in the United States.

One of the company’s showcase projects, Añón explains, is the installation of a ground-based solar array on the newly operational Maywood Solar farm in Indianapolis. The 43-acre solar array — the first solar farm built on an existing Superfund site with previous ground contamination — is on land owned by Vertellus Specialties and supported by Indianapolis Power & Light Co.’s (IPL) Rate Renewable Energy Production (REP) program.

Under the voluntary feed-in tariff program, IPL will pay Hanwha Q CELLS 20 cents per kilowatt hour for the 10.82 megawatt project, which will operate for 20 years and is projected to reduce carbon dioxide emissions equal to the annual carbon emissions of more than 2,700 passenger vehicles or 1,800 homes.

“We were excited to start the development of this project with Vertellus Specialties, and hand it over to Hanwha Q CELLS for completion,” said T.J. Kanczuzewski, president, Inovateus Solar during the project’s announcement in July. “This is another example of how public utilities and private companies can work together to achieve the goal of introducing more renewable energy in the state of Indiana. Our company is looking forward to making other announcements on projects built in the IPL Rate REP program soon.”

In addition to environmental gains, the mainstreaming of solar is also bolstering energy independence and benefitting communities at the local level, says Ernie Shea, project coordinator, 25x’25 Alliance, whose group is working collaboratively to advance the goal of securing 25 percent of the nation’s energy needs from renewable sources by the year 2025.

“With economics and policy now aligning, I see a continued and expanded period of growth in solar development, especially with rural electric cooperatives,” Shea says. “For example, the Farmers Electric Cooperative based in Frytown, Iowa, built a new solar array as part of their strategy to generate 15 percent of their power locally with renewable energy.

“Eagle Point is now the largest solar farm in Iowa, generating enough power for 120 homes a year, and because it is renewable energy, the facility displaces over 2 million pounds of carbon pollution that would otherwise be generated by coal-fired power plants,” Shea continues. “Farmers Electric Cooperative has the highest per-capita solar generation rate in the country. Bringing this level of renewable power generation and distribution capacity to rural America helps farmers do several things: control future energy costs, help ensure long-term profitability, improve their environmental performance, and enhance our national security.”

The solar farm was brought online in part through 25 x’25’s Energy for Economic Growth initiative that assists rural electric utilities to develop viable business models and facilitate the deployment of renewable energy generation and distribution.

“The Kalona solar farm shows the enormous opportunities for rural electric cooperatives and utilities to be leaders in the renewable energy sector,” Shea adds. “As part of a cooperative business, Farmers Electric Co-op members will benefit from energy rates that are now secured long-term with multi-year distribution contracts, and because their co-op can reduce transmission losses by generating power closer to their customers. In addition, more money stays in the local economy.”

“There might have to be adjustments made as issues like anti-dumping tariffs unfold, but I don’t think they will pose a long-term threat to the industry,” Shea says. “The costs of solar PV have come down, making it a whole different ball game from even five years ago. We’ve gotten to the point where reduced costs are making renewables more competitive and creating new opportunities. The bottom line is that the world is migrating to a lower-carbon energy system and evolving energy solutions, including solar, will continue to be compelling.”