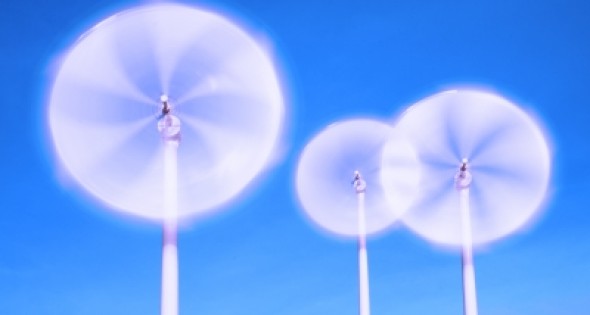 The wind energy industry hit milestones in 2013, overcoming a 92 percent reduction in the capacity installed in the first part of the year, a slow down due to the delay in the extension of the federal Production Tax Credit (PTC). The evolution of the industry is also beneficial to economic development initiatives.

“You can also look at it from a net generational standpoint,” Williams says. “Texas is where one-fifth of the wind capacity in the United States is installed; more than 3 million homes can be powered by the wind in Texas.”

Williams says the extension of the PTC, which took place in early 2013, has resulted in an historic number of megawatts under construction. For example, Texas has more than 7,000 megawatts of new wind capacity under construction, which is more than any other state currently has installed. “A PTC extension used to mean that the product had to be placed in service by the year the PTC expired,” Williams says. “The language changed last year so that a project had to start construction, or 5 percent of the value of the project has to be put into safe harbor. This has expanded the pool of projects.”

Another contributing factor to the increase in projects includes state-level Renewable Portfolio Standards, which call for utilities to add a certain percentage of renewables to their mix of power generation sources.

And, naturally, some states are blessed with an ideal location to exploit the wind energy resource. “Texas has good wind resources to start with, as well as a friendly climate for developing and constructing new projects,” says Rob Morgan, chief development officer, Renewable Energy Systems Americas Inc. (RES Americas).

RES Americas has been involved in the building of more than 7,000 megawatts of renewable energy systems, primarily wind but also solar; increasingly solar in the past couple of years. “We have 1,000 to 2,000 megawatts of wind energy projects in the pipeline,” Morgan says.

Williams says the wind energy industry will be strong this year and in 2015. One of the larger investors is MidAmerican Energy Co., which is investing $1.9 billion to install new wind turbines in Iowa. The utility is sourcing its blades from the Siemens’ manufacturing facility in southeast Iowa, Williams says. “One thing that is neat about the industry is that we have done a lot of insourcing. Five years ago the percentage of a wind energy project was 25 percent made in the United States. Last year it was more than 72 percent. Because the components are so large and transportation costs are so high, it makes sense to manufacture domestically. We have seen large companies such as Siemens and Vestas set up plants in states like Iowa, Colorado and Kansas.”

Microsoft has committed to a 20-year power purchase agreement with RES Americas to buy 100 percent of the electricity generated from the Keechi Wind Farm Project in Jack County, Texas. The site is located 60 miles northwest of Fort Worth.

There were also an unprecedented number of power purchase agreements between companies and utilities in 2013. The utilities were able to lock in historically low prices for wind power for 20 years to 30 years to take advantage of the PTC.

Tech companies are leading the trend of corporates investing in wind energy for the long term. Microsoft and Google have both signed power purchase agreements in Texas this year. “Google has invested heavily in wind across the country to power their data centers,” Williams says. “Facebook announced they would locate a data center in Iowa due to the presence of cheap wind power that they could contract from MidAmerican Energy.”

“You will find the Googles, Microsofts, and the Apples tend to have a different view culturally about this,” Morgan says.

Microsoft has committed to a 20-year power purchase agreement with RES Americas to buy 100 percent of the electricity generated from the Keechi Wind Farm Project in Jack County, Texas. The site is located 60 miles northwest of Fort Worth.

The Keechi Wind Farm will generate 110 megawatts of wind energy, powered by 55 wind turbines manufactured by Vestas. “Financing with Microsoft and Enbridge closed in December 2013, and the project is under construction,” Morgan says. “We will begin receiving wind turbines in the April-May time frame.”

Not Just for Techies

Corporations outside of the tech space are also entering long-term purchase agreements for wind energy. Williams says Walmart Stores is a large investor in renewable energy, and has a power purchase agreement in place in regard to wind energy generation from Texas. In other activity, medical supply company, BD, has entered an agreement with a utility in Nebraska.

“We are also seeing a lot of interest from universities,” Williams says. “The Ohio State University signed a 20-year contact for 50 megawatts of wind energy from a project in Ohio.”

Universities are looking beyond the installation of a wind turbine onsite that generates only a fraction of their energy, and looking instead to purchase output from large wind farm operations.

The increase of long-term power purchase agreements by corporations and universities is a win-win because wind developers need the agreements to move forward on projects. In Wyoming, the Chokecherry/Sierra Madre Wind Farm project has the elements of a win-win, says Loyd Drain, executive director, Wyoming Infrastructure Authority.

Williams says corporate purchasers of wind energy are concerned with lowering their environmental footprints, but they also see wind energy as cost competitive, and an economic opportunity to lock in rates for 20 years to 30 years.

The Anschutz Corp., through its affiliates, aims to move wind energy from Wyoming to serve the California market. The Power Company of Wyoming LLC and TransWest Express LLC are developing the proposed $8 billion wind farm and transmission line project in Wyoming.  The development is proposed for Carbon County.

The transmission line will be direct current, mitigating the heat losses found with alternating current lines. Drain says TransWest Express intends to place a convertor station in Carbon County, located adjacent to the wind farms, and convert the AC produced by the turbines to DC and transmit the power to southern Nevada. Another converter station in Nevada will convert the DC energy back to AC energy before making its way to the California energy grid.

“I feel like the business case is there for California to step up and buy 3,000 megawatts of Wyoming wind,” Drain says. “Time will tell. It is a smart thing to do. Our job is to be advocates for the initiative.”

Three studies outline the advantages to California by purchasing Wyoming’s wind power. A study by the University of Wyoming reviewed geographic diversity, comparing Wyoming’s wind resource to California’s wind and solar sources. The state’s wind pattern is different from California’s pattern. Blending the resources in Wyoming with California’s offsets fluctuations on the grid due to the fact that generation occurs when the wind is blowing and the sun is shining. Drain says the results lessen the amount of dispatchable generation, such as natural gas, needed to keep the lights on.

The proposed addition of wind energy capacity in Wyoming, as well as projects throughout the country, are fulfilling the increase in demand for wind energy by industry.

Williams says corporate purchasers of wind energy are concerned with lowering their environmental footprints, but they also see wind energy as cost competitive, and an economic opportunity to lock in rates for 20 years to 30 years.

“The big industry users understand their exposure to climate change,” Morgan says. “In the future, whether there will be a carbon tax or something, we don’t know, the large energy users understand it best and are managing their carbon footprints appropriately.”

Drain says the stakeholders of the Chokecherry/Sierra Madre Wind Farm project are communicating the quantifiable benefits of wind energy to the marketplace. “Not all renewable energy is created equal,” he says. “It is important to look at those resources that provide the largest amount of megawatt hours per dollar of the cost, and we win the analysis every day.”

For more information about the organizations featured in this article, visit:

Officials in Fairfield have partnered with officials at Travis Air Force Base in support of wind energy developments, so as not to impede on efforts at the base. “We keep them in the loop in terms of planning, design and location of the wind turbines,” says Charles Ching, economic development project manager for the city of Fairfield’s economic development division. Fairfield is located halfway between Sacramento and San Francisco.

The experience in working with local interests and corporate wind energy activities is attractive to industry. “We get through the entitlement process quickly, and we know the regulations around the base,” Ching says. “Our planning and building groups are familiar with the regulations businesses need to abide by. We don’t cause a delay on our end.”

Ching says Fairfield’s location is ideal to support small scale wind farms. In a manufacturing town, home to large power users, corporations are also exploring the benefits of employing wind energy and solar energy resources on their sites. The local Anheuser-Busch InBev plant makes use of wind and other renewable energies to power operations. The company produces between 4 million and 5 million barrels of beverages a year from its 700,000-square-foot plant, which sits on 170 acres. “Last I talked with the company, one wind turbine [1.5 megawatts] generates enough power to supply 20 percent of their use,” Ching notes. “They are putting in another turbine of similar size.”

For complete details on wind energy and Fairfield, visit www.businessinfairfield.com and www.fairfield.ca.gov.