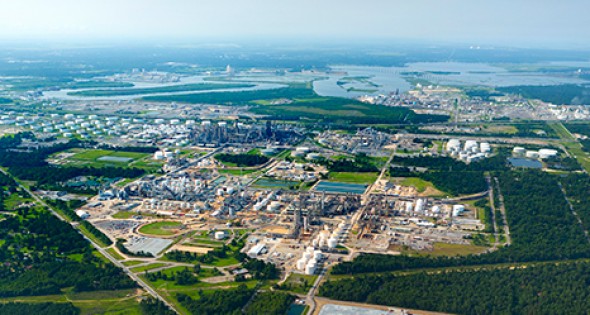 The ethane cracker is one of two projects announced in December 2012 during the feasibility stage, with the other being a gas-to-liquids facility that would increase the total number of new direct jobs to more than 1,250. While making a definitive announcement now to build the ethane cracker complex, Sasol estimates it will make a final investment decision on the estimated $11 billion to $14 billion GTL project within 24 months.
In addition to the $8.1 billion capital investment for the petrochemical complex, Sasol will spend $800 million for infrastructure improvement, land acquisition and utility improvement costs at the site, bringing total site costs for this project to nearly $9 billion.
Sasol’s ethane cracker complex will produce 1.5 million tons of ethylene annually, with approximately 90 percent of the complex’s ethylene output converted into a broad range of chemicals used to make everyday products such as detergents, lotions, cleaners, packaging, paints and adhesives. The new Louisiana project will result in a significant impact on the South African company’s chemical production and workforce in the U.S., where Sasol’s employment will grow 50 percent.
Sasol also announced that Fluor Technip Integrated – a joint venture of two of the world’s largest engineering, procurement, construction and management companies – will lead the project’s construction. The FTI joint venture has been created specifically for the Sasol project, with the Australia-based consulting firm of WorleyParsons bringing significant Gulf Coast experience to support Sasol’s project management of the ethane cracker complex.
To secure both the GTL and the ethane cracker projects, Louisiana offered Sasol a performance-based grant of $115 million for land acquisition and infrastructure costs associated with the facility. Sasol also will receive the services of the LED FastStart workforce training program. In addition, the company will qualify for Louisiana’s new Competitive Projects Payroll Incentive (up to 15 percent payroll rebate for each GTL job) and Quality Jobs Program (up to 6 percent payroll rebate for each ethane cracker job), with the payroll incentives applied for up to 10 years.
To support Sasol’s workforce needs during construction and operations, the state is investing $20 million for a new training facility and associated equipment focused on industrial technology at SOWELA Technical Community College in Lake Charles. Governor Bobby Jindal broke ground on that SOWELA Sasol Regional Training Center with company and college officials in October. Finally, Sasol is expected to utilize the state’s Industrial Tax Exemption Program for both the ethylene and GTL facilities.

Should Sasol proceed with the GTL project, the combined projects would represent one of the largest manufacturing foreign direct investments in U.S. history, with an estimated capital investment of $19 billion to $22 billion and more than 7,000 new direct and indirect jobs.
Learn more.