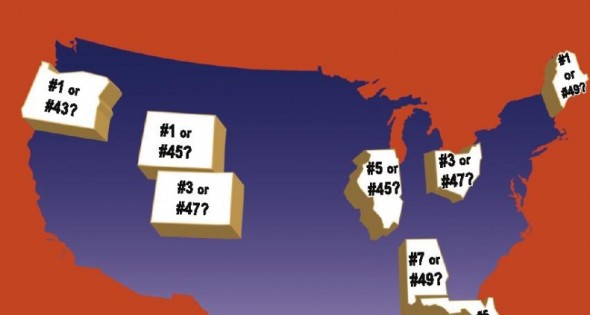 As originally issued on May 1, this report stated that the Beacon Hill Institute’s State Competitiveness Index used fabricated data. This assertion drew from a misunderstanding on our part that arose over the decision by BHI to include only some of the variables in the state-by-state comparisons.

The institute challenged our allegation, pointing out that on its state pages it chose to display only those variables for which a state was deemed competitive or not competitive, while complete data for each state drove the Index. The institute provided us its complete, unpublished, data set. In response, we removed the report from our website, corrected it, and reposted it.

Good Jobs First and Peter Fisher apologize to the Beacon Hill Institute and regret the error. Otherwise, our analysis of the State Competitiveness Index and the other rankings stands.

Prominent studies that purport to measure and rank the states’ “business climates” are actually politicized grab-bags of data. They have no predictive value and should not be used to inform public policies.

Those are the main conclusions of a new study published by Good Jobs First. Grading Places: What Do the Business Climate Rankings Really Tell Us? which is authored by Dr. Peter Fisher, an economist who has written extensively on economic development.

“When we scrutinized the business climate methodologies, we found profound and elementary errors,” Fisher says. “We found effects presented as causes. We found factors that have no empirically proven relationship to economic growth. And we found scores that ignore major differences among state tax systems.

“Given these underlying flaws, it is no surprise that the rankings wildly contradict each other and fail to predict which states’ economies will thrive,” Fisher continues. “Instead, we note that the factors often have to do with the advocacy agendas of the groups.”

“Grading Places” also examines other studies. “Our study does not try to correct these rankings or present a new rating,” says Greg LeRoy, executive director of Good Jobs First. “Indeed, that is one of our main points: the needs of different businesses and facilities vary so much — and conditions vary so much between metro areas even in the same state — that the whole concept of a state ‘business climate’ is nonsensical. For only the third time in 27 years, the pseudo-social science of ‘business climate’ ratings has been debunked. We should lay aside these useless reports and debate the real issue: how to build a tax system that is fair, modern and relevant.”