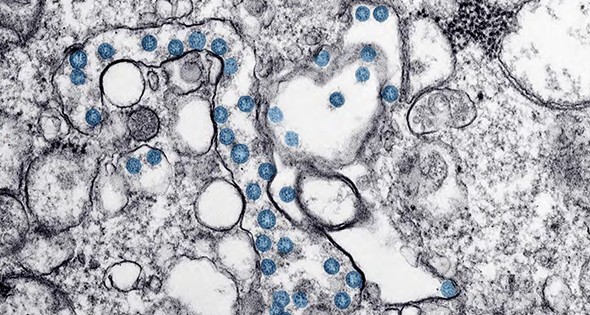 The amazing world of bioscience, also called life sciences, has been thrust onto center stage as a result of COVID-19 after years of below-the-radar business development and process commercialization essentially coming from various labs associated with academic institutions.

The lab discoveries are making their way into practical applications that, in the case of this pandemic, are saving lives and providing medical assistance at a rate never seen before.

The nation’s bioscience industry employs 1.87 million across more than 101,000 U.S. business establishments, according to “The Bioscience Economy 2020” report by the Biotechnology Innovation Organization (BIO).

Since 2016, the industry has grown its employment base by 7.2 percent, which is more than twice the growth rate for the overall private sector.

In a study published by the American Chemical Society, a major challenge remains in overcoming the difficulties associated with translating the laboratory research quickly into commercially viable prototypes by industry, and addressing the complex regulatory issues required for clinical settings, especially during pandemics. “The good news is that slowly the technology transfer investments from government and industry is on the rise,” the study reported. “In addition, regulatory policies from the government in many countries are becoming increasingly business friendly with the academics.” 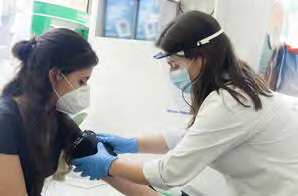 A volunteer and lab scientist going COVID vaccine research at a Pfizer lab.

Well-known companies such as Pfizer, Moderna and others have found ways to develop vaccines faster than ever, astounding the industry watchers with not only their speed to market but their innovative method for creating the vaccine that has its roots in the emerging bio-economy.

“Right now, the bio-economy means different things to different groups of people,” wrote Elizabeth Strychalski, a physicist and the group leader in the Cellular Engineering Group (CEG) for the National Institute of Standards and Technology (NIST), in an email responding to original questions from Business Xpansion Journal.

The NIST Biosystems and Biomaterials Division (BBD) works to support the scientific study of measurements for the bio-economy broadly, in a way that cuts across many of the definitions of bioeconomics, she wrote. “Arguably, all include biology as a central component of the manufacturing process or product.”

In one project, the CEG is advancing measurements around workflows for directed evolution, to streamline the production of biological sensors to monitor the quality and performance of those processes and products. These “genetic sensors” are typically encoded in DNA or RNA, giving, for example, measurement “handles” directly inside cells, to help build a bio-economy that delivers controlled, safe, and effective applications of biotechnology for as many people and applications as possible, she wrote.

It allows researchers to experiment with cells, adjusting their genetic codes and molecular machinery to predictably engineer a cellular system to do exactly what they want it to do. In effect, it’s a project to help automate biology, and create cells that could act as sensors. These cells could be placed in a patient and be autonomous, acting to cure diseases or treat recurring problems as they happen.

One of the states that has quickly become a center of life sciences research and development is Georgia, where Atlanta is the home of the Centers for Disease Control and Prevention (CDC). Georgia has 1,960 life science establishments employing 15,500 people in research, testing, and medical laboratories; medical devices; and biopharmaceuticals. 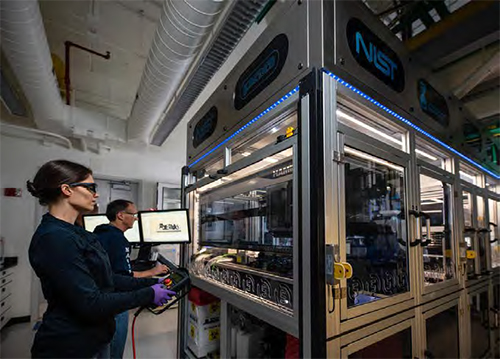 Elizabeth Strychalski and David Ross program the movements of the main robotic arm in the NIST Living Measurement Systems Foundry. Biofoundries like this make it possible to engineer living cells so that they produce specific medical treatments.

The state has five universities, with nearly 9,000 people working in life sciences research and activities. In 2018, institutions based in Georgia received $549 million in National Institutes of Health (NIH) research funding.

Pfizer released its mRNA COVID-19 vaccine in mid-December, 2020. The mRNA teaches cells how to make a protein—or even just a piece of a protein—that triggers an immune response inside our bodies, which produces antibodies.

Over the last five years, Georgia has consistently ranked 15th nationally in average annual NIH funds received by states; NIH funding to institutions in Georgia has grown by 20 percent since 2010.

Another concentration of bioscience businesses is both in and near the Chicago metro area, including Batavia, Illinois, employing 1,750 working at the 6,800-acre Fermilab site, an organization specializing in high-energy particle physics in partnership with the University of Chicago and a consortium of 89 other research universities; and the Argonne National Laboratory in Lemont, Illinois, a science and research center spun off the University of Chicago’s famous work with the first atomic weapon in the 1940s, working with an annual budget of over $800 million.

One recent bioscience move in the Chicago area was when Switzerland-based global healthcare company Novartis bought Chicago-based AveXis, a biotech company that develops treatments for rare neurological genetic disorders, for $8.7 billion in 2018.

Research by Caldwell Banker Richard Ellis (CBRE), a real estate services company, showed that few institutions in the U.S. have increased their NIH funding as rapidly as Northwestern University, a private research university in Evanston, Illinois. Over the past decade, the university built the 600,000 square foot Simpson Querrey Biomedical Research Center. A second, similarly-sized phase of this project will follow.

There is also new collaboration between the University of Illinois-Chicago, the University of Chicago and Northwestern University for a new bioscience innovation center; the potential for the 560-acre Illinois Medical District in Chicago to be designated a federal opportunity zone; and a new state government administration expected to be more aggressive in courting the life sciences industry.

Bioscience success stories like these are coming rapid-fire from all over the U.S.

The CBRE research report found that venture capital funding to the life sciences industry has surged 86 percent over the past year, driving employment growth, new construction and increased attention from investors.

The Washington, D.C.-Baltimore region had the largest percentage increase in life sciences venture-capital funding over the past 18 months of any major market in the country, mostly going to biotech companies.

Major investments in this region were made in Viela Bio in Gaithersburg, Maryland, a biotech company working to commercialize medicines for people with autoimmune and severe inflammatory diseases; NextCure in Beltsville, Maryland, a clinical-stage biopharmaceutical company working on cancer treatments; and Personal Genome Diagnostics in Baltimore, developing an innovative portfolio of regulated tissue-based and non-invasive liquid biopsy genomic products for laboratories worldwide.

The CBRE report also highlights significant industry momentum in New York City, which is the seventh-ranked life sciences cluster in the nation with more than 1.5 million square feet of lab space under construction. Here, three life sciences incubators will open this year, and a significant uptick in venture-capital funding began in 2018. Demand has been driven by companies involved in biotech, medical devices, and cell and gene therapy.

Genome-scale engineering holds great potential to impact science, industry, medicine, and society. Recent improvements in DNA synthesis have enabled the manipulation of megabase genomes (megabase is the measure of the length, or number of base pairs, of a genome segment). 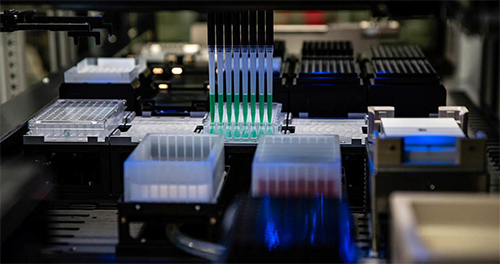 The business of organizing bioengineering efforts is gaining momentum.

The bio-engineering buildup has led to the creation of the so-called biofoundry, such as the one at NIST that can run thousands of experiments in a short amount of time, providing the data needed to determine if a complicated piece of biological experimentation will work predictably every time. There are at least 25 other biofoundries across the world today, designed to be engines for accelerating the bioeconomy.

Abraham Lee, a biomedical engineer and director of the Center for Advanced Design and Manufacturing of Integrated Microfluidics (CADMIM) at the University of California-Irvine (UCI) Samueli School of Engineering, is focusing his work on the development of integrated microfluidic systems for precision medicine, including liquid biopsy, cell sorting and profiling, micro-physiological systems, point-of-care molecular diagnostics, cell therapy, and immunotherapy. CADMIM is an industry/university cooperative research center supported by the National Science Foundation.

He says that UCI and the University of Illinois-Chicago are working with other universities to help identify the current technical bottlenecks in production or commercialization. “We cover the whole range of life technologies, in a sense, working with a wide variety of various companies,” Lee says. “That includes livestock companies, plant agriculture biotech companies and human health companies, including pharmaceuticals and biotechnology. Basically anything that has cells, DNA, and tissues, we have projects with them.”

Life is all intertwined and interconnected, he says. “We do genotyping for plants but the same technology can be used for mammalian cancer diagnosis, for example. That is the big picture.”

The vision of some of their research is to develop a disease targeting a multifunctional therapeutic device to help the body’s defense mechanisms combat disease. “We already have pacemakers and defibrillators and other implants,” Lee says. “These new therapeutics will go in and trigger the body to strengthen and defend itself, work with it for a period of time, then dissolve and get disposed of by the body. We are also developing artificial cells, and other components based on synthetic biology that directly have the transducer interfaces with the body’s owns sensors, in terms of receptors. So those things are coming.”

Lee says he is fascinated by the immune system and their synapses—how they recognize an invader then trigger multiple levels of defense. “The more we understand how the body works, the more we can work with the body to maintain health as well as hopefully prevent diseases,” he says. “And if they get the disease, we can fight them off more target-specifically.

“In the future, these health-maintaining chip technologies will democratize the healthcare system so you don’t have to have the bottleneck of going to centralized hospitals. We want people to have much more access to advanced medicine as they develop. I think that is where microchips will play a role in the future.”