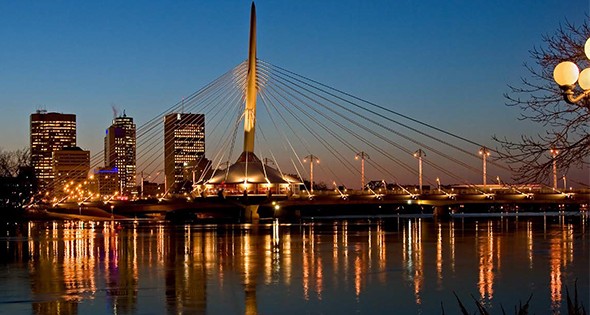 With a population of 1.3 million and situated smack in the middle of Canada, the province of Manitoba may be one of the most commercially strategic locations in North America. Boasting a Gross Domestic Product (GDP) of $62 billion, the sixth-largest in Canada, a high employment rate averaging around 94 percent, and abundant natural resources, Manitoba may just be the hidden gem for expanding a business or launching a new one.

The first phase of the strategy includes plans to increase economic activity surrounding cultural, tourism, and agrifood sectors, with the second phase focusing on skills, talent, and knowledge to follow. The overall intent of the Economic Growth Action Plan is to spur trade, investment, and career opportunity growth to create 40,000 private-sector jobs over a four-year period.

For anyone looking to expand a company, start a business, or look for a new career opportunity, it’s time to a hard look at Manitoba.

Brandon, Manitoba’s second largest city is centrally situated and robustly diverse, with an economic base that includes more than 2,000 businesses involved in everything from agricultural processing to manufacturing to transportation and the service industry. The manufacturing of metals, chemicals and pharmaceuticals account for a significant number of jobs. Brandon’s proximity to the nearby Bakken oil fields and Canadian Forces Base Shilo positively influences the economy and housing market. The city’s well-earned reputation as the educational, health, entertainment and professional services trading centre for over 180,000 people ensures the availability of services and amenities typically only found in much larger urban centres.

Brandon’s overall cost competitiveness is consistently ranked by international accounting firm KPMG in the top 10 of Canadian Cities surveyed supporting decisions by companies such as ChemTrade, Maple Leaf Foods and Greenstone Structural Solutions to establish their flagship facilities in the City. Companies such as Behlen Industries, the largest pre-engineered steel Manufacturer in Canada, Saputo Dairy, and Koch Fertilizer continue to invest significantly in their Brandon facilities reinforcing the cost advantages of operating a manufacturing facility in Brandon.

The Conference Board of Canada indicates Brandon’s economy is on a moderate growth path. The area’s real GDP is forecast to grow by 1.5 in 2020. Indications are that 10 out of 11 industries will post output gains. Despite challenging global dynamics, Brandon’s manufacturing output expanded by 2.0 per cent in 2018, its fastest growth in six years.

Population growth, an important driver of economic potential is forecasted to be a solid 1.2% in 2020, especially when compared against other mid-sized cities in Canada. Growth is on par with the national average rate.

Brandon’s regional labour force of 60,000 has proven to be extremely stable, committed and well educated. Brandon University and Assiniboine Community College provide a skilled workforce to Brandon employers year after year. The city’s long-term employment trends have been positive, with the local economy generating an average of 450 jobs per year over the past twenty years. The economy added a total of 3,900 net new jobs in 2017–18, the strongest two-year gain in over a decade. The 2020 unemployment rate is projected to be 4.5%.

Brandon’s proven track record with the successful attraction and settlement of thousands of newcomers positioned the City to be one of eleven Canadian Municipalities selected by Immigration Refugees Citizenship Canada to participate in the Federal Rural and Northern Immigration Pilot. The three-year Pilot running until October 31st, 2022 has been designed to spread the benefits of economic immigration to smaller communities by creating a path to permanent residence for skilled foreign workers who want to work and live in one of the participating communities. This exciting opportunity allows Brandon to identify its labour needs and use targeted attraction approaches to bring newcomers to the community to fill traditionally hard to hire for positions while simultaneously growing the local labour market and population.

A growing population, sustained investments from existing and new businesses, and a strategic yet flexible plan for economic prosperity combined with proximity to an abundance of rich agricultural resources, and an engaged business community form a solid foundation for continued economic prosperity.