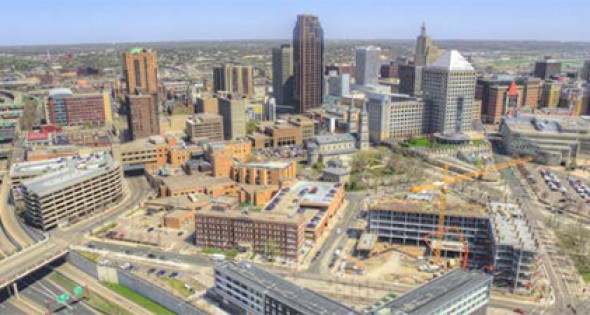 Minnesota is a study in contrast with its small town feel and Fortune 500 companies. From a quality of life standpoint the only obstacle is a little bit of cold weather during the winter. If one can get over that the next discovery is 10,000 lakes, festivals galore, clean cities and very nice if somewhat reserved at first people. The North Star State has given us F. Scott Fitzgerald, Prince and Bob Dylan not to mention the Mall of America and The Mayo Clinic.

Job opportunities are some the best they have been in years, although many employers are having trouble finding and keeping workers. The state is also surprisingly affordable in major categories compared with its Northeastern neighbors.

There are nearly 200 post-secondary institutions. The University of Minnesota is the largest in the state with over 50,000 making it the sixth-largest American campus by enrollment size.

Albert Lea is at the intersection of Interstates 35 and 90 in Southeast Minnesota, roughly halfway between Des Moines and Minneapolis. The city has “a strong history of manufacturing [going] back to just after World War II,” says Interim Executive Director, Noelle Hagen of the Albert Lea Economic Development Agency (ALEDA).

“We’re well diversified,” says Hagen “Our strong history has been in food processing, and we continue to have a huge presence in that sector.” Examples include Mrs. Gerry’s Kitchen, Ventura Foods and Albert Lea Select Foods.

ALEDA “has over 200 acres of land under our control for development,” says Hagen. That includes the ALEDA Industrial Park’s 70 available acres. ALEDA owns five industrial buildings for lease; one of those, a 62,500-square-foot food-grade facility, is currently available and is an ideal location for distribution, warehousing, or light manufacturing.

ALEDA tailors incentives “project-by-project,” Hagen says. “Some businesses need to offset upfront building costs; some prefer tax abatements over time to offset long-term operational costs. We like to get with the companies and look at what’s best for them and design something accordingly.”

“We partnered with a food processor in town to construct a new building which we lease to them so they can put their capital toward job creation and new equipment,” Hagen says. Zumbro River Brand has roughly 115 employees now, and this project allowed them to create 20 new jobs.

“Workforce is the major hurdle to economic development right now,” Hagen, explaining that in Albert Lea, as in many non-urban areas of the U.S., younger generations in the workforce are not able to replace the sheer numbers of retiring baby boomers.“ As a region, Southeast Minnesota is trying to be proactive to recruit people to our part of the country,” Hagen says. ALEDA is working with higher education institutions in the region to help students gain internships and form professional connections in the area. Those connections added to family ties, she says, can be a persuasive argument for people to return to Albert Lea.

The City of Elk River is one of the fastest growing business communities in Central Minnesota, with 30% job growth rate, 50 manufactures and two fortune 50 data centers. Our goal is to continue this economic growth and vitality by adding to the city’s thriving business environment. The heart of downtown Elk River is located at the convergence of the Elk and Mississippi Rivers. Elk River has a longstanding history in energy. We’d even go so far as to say it’s a tradition — a tradition that keeps on growing. From the construction of the Elk River dam in 1856 to becoming a hub of energy technology and manufacturing that led to the Minnesota designation of Energy City, our community has been on the cutting edge of clean and renewable energy for years. Elk River Municipal Utilities (ERMU) has superb water quality and electrical reliability that earned them the American Public Power Association’s prestigious RP³ designation signifying a Reliable Public Power Provider. Their electrical service provides 99.999% reliability with infrastructure large enough to handle the demands of data centers and manufacturers. The water for cooling has very little mineral content. We are naturally equipped for the development of migrating or expanding businesses. Coupled with the accelerated timeline from groundbreaking to completion, you won’t find a community that’s a better site for business. The heart of the city is powered by its nature. The Elk River community prides itself on outdoor recreation and programming, with 41 parks totaling 1,100 acres, over 35 miles of paved walkways, and myriad of hiking and biking trails, there are plenty of recreational options for all the outdoor enthusiasts. Elk River is a place for people who live and breathe the outdoors, knowing they have the comforts of big-city amenities the surrounding area has to offer. The City of Elk River Economic Development Department offers a variety of services that can assist any size project or industry looking to relocate. We are confident you’ll find everything you need for your business. Contact our team today 763.635.1000 or ElkRiverMN.gov.

The City of Fairmont is located in south central Minnesota, right on I-90, which provides access to Interstate 35, Des Moines, Sioux Falls and Chicago. Powered by a mix of agricultural and industrial businesses like 3M, CHS, Green Plains Renewables, Advanced Drainage Systems, Kahler Automation and Avery Weigh Tronix; Fairmont has become one of the state’s leading agricultural communities. “The City has a strong history of manufacturing and has continued to grow due to the large expansions of Fairmont Foods and Zierke Built Manufacturing in the last year,” says Linsey Preuss, Economic Development Coordinator for the City of Fairmont.

Fairmont is positioned to offer competitive incentives and as a rural community, Fairmont can extend additional opportunities such as customized training opportunities and workforce attraction programs. “We believe that strong partnerships strengthen our community and allow us the privilege of doing things no other community can do,” says Preuss. “An example of this is the recent reinvigoration of our high school’s welding and agricultural academies as many organizations and businesses helped to make it happen,” she added.

The City of Fairmont owns a 75,000 square foot virtual spec building which is expandable to 100,000 square feet; it has been through all the building plan reviews and is ready for construction.

Fairmont has an established industrial park of which 18 acres are certified shovel ready by the State of Minnesota’s Department of Employment and Economic Development. Another option coming soon will be a 40-acre site right off Interstate 90. The City owns an option to purchase and is currently working on making the site shovel ready. Fairmont offers project based land grants, as well as TIF and tax abatement incentives.

Fairmont’s target industries are agribusiness, metal fabrication and manufacturing and distribution. “Agribusiness is one of our targets because we are the state’s largest producer of hogs and corn and in the top ten for soybeans and cattle,” Preuss says. “We have a number of metal fabricators that have been able to take advantage of our current workforce skill sets and our distribution companies capitalize on Fairmont’s immediate access to I-90 and being in close proximity to I-35 and I-29.”

The community driven Fairmont Area Life campaign (FairmontAreaLife.com) is actively recruiting workforce to our area through its online and social media presence. Its approach includes a team of professionals to help those who are interested in relocating to Martin County get connected with local schools, employers and realtors to answer any questions newcomers or potential newcomers might have. For more information, fairmont.org/economic-development-2/

The City of Lakeville was voted #28 on Money Magazine’s “Best Places to Live in America” in 2018 and is a place where businesses and families thrive. With a population of approximately 64,000, Lakeville is one of the fastest growing cities in the Minneapolis-Saint Paul metropolitan area. Lakeville is conveniently located along I-35 in Dakota County, which is the third largest county in Minnesota (population 421,751). The city is comfortably situated in close proximity to Minneapolis and Saint Paul, as well as the Minneapolis-Saint Paul International Airport and Mall of America.

Lakeville’s vision for the future is to increase economic sustainability through diversified economic development. In 2017-2018, the city saw growth across all sectors with the addition of retail, healthcare, breweries, restaurants and manufacturing. Approximately 456,000 square feet of industrial space and 200,000 square feet of commercial space were constructed or permitted in 2017.

Lakeville has led the metro area for single-family home permits for 5 years and counting (2012-2017 and through September 2018). Last year, the city issued 454 single-family home permits and are on track to issue similar permit numbers in 2018. In addition, the city saw the construction of 266 market-rate apartment units, 117 senior housing units, and 85 workforce housing units constructed or permitted in 2017-2018.

Lakeville combines a peaceful and safe small-town atmosphere with big city opportunities. The city’s residents are proud of its excellent schools, community arts center, extensive parks system, and wide array of recreational activities. Lakeville has over 1,600 acres of Public Park and open space, including 100 miles of pedestrian and bike trails and a 5-acre dog park. The city also has five recreational lakes for fishing, boating, swimming, and motorized water sports. The community offers three award-winning school districts within its boundaries and 96% of the population has a high school diploma, while 48% of residents have earned a four-year degree or higher. The Lakeville Area Arts Center, a city owned and operated facility, provides a variety of options for live music, entertainment, theater, art, pottery classes and more. Lakeville, Minnesota is certainly Positioned to Thrive – making it a great location for any project. For more information: David Olson, Community & Economic Development Director dolson@lakevillemn.gov or visit lakevillemn.gov