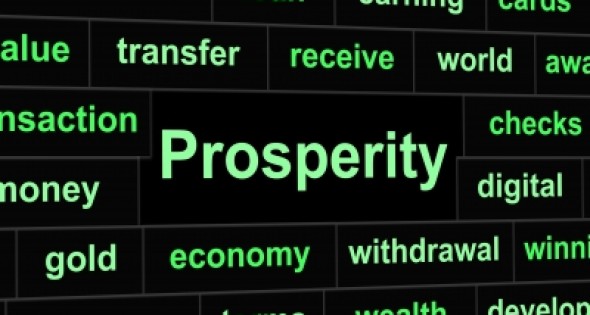 New Jersey Prospers Because of Its Reach

New Jersey’s economy is diversified and strong because of its highly educated workforce and ability to reach a large population of prosperous consumers.

In fact, 130 million consumers are within a day’s drive of New Jersey, says Michael Chrobak, chief economic development officer of Choose New Jersey Inc. With all those consumers, New Jersey created a law to improve the business climate.

“The new legislation reduced the threshold for companies to qualify in terms of job creation,” Chrobak says. The Economic Opportunities Act of 2013 (EO 13) provides $300 million in tax incentives — known as the Grow New Jersey incentives — for eligible projects.

Camden is a Garden State Growth Zone (GSGZ) designated by the EOA 2013. Businesses can receive up to $30 million in tax credits in a GSGZ, but in Camden the credit is up to $35 million.

The Philadelphia 76ers, the NBA team based in Philadelphia, announced that they will “move their offices from Philly to Camden and build a practice facility,” Cappelli says.

He adds that Subaru of America announced they will “build corporate headquarters right next to Campbell’s Soup.” The Campbell Soup Co. has had its headquarters in Camden since it was founded in 1869. The expansion “has the potential to create 100 new jobs,” Chrobak adds.

“The Economic Opportunities Act of 2013 really gives us the tools to attract businesses and grow the port,” says Jay Jones, deputy executive director of the South Jersey Port Corp. (SJPC). 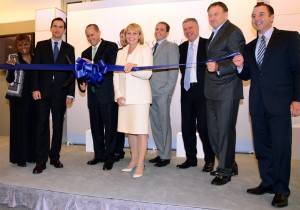 The SJPC is a public port authority and works to create public and private partnerships in the “two terminals in Camden, a facility on Camden County, and a foreign trade zone,” that they run, Jones says — that is FTZ 142 to be exact.

The SJPC has a large new project in the new Paulsboro Marine Terminal, which is located across the Delaware River from Philadelphia International Airport. Jones explains that the SJPC is turning “an old tank farm into a marine terminal,” and that they plan to have it open late 2015 or early 2016.

The first tenant of the terminal will be Holt Logistics Corp., Jones says, explaining that Holt is a private terminal operator.

The SJPC saw its second year of increased tonnage, Jones says. In 2014, tonnage increased by 24 percent overall, and in steel they saw a 65 percent increase over the 2013 totals.

Among those industries, New Jersey has “over 270 foreign companies and five foreign trade zones,” Chrobak says.

“Life sciences and food are the fasted growing,” he continues, explaining that the growth has given New Jersey two nicknames: “Medicine Chest of the World” and the “Garden State.”

“Health science and biotechnology industries are doing very well,” Cappelli says, explaining that those sectors are seeing growth in Camden County in manufacturing medical implants and refrigeration of medical products.

“Food and food processing companies are doing very well in Camden County,” Cappelli says. Campbell’s is one among several.

New Jersey’s food processing and agriculture sector is home to 1,900 food manufacturing companies, and has increased employment by 3 percent since 2010, Chrobak says. In addition to Campbell’s, New Jersey is also home to Goya Foods, Inc., Mondelēz International, Jimmy’s Cookies and many others.

The state sees $1.2 billion in farm revenue, Chrobak says, and that’s mainly in fruits and vegetables including cranberries, bell peppers and peaches.

The SJPC has 1 million square feet of warehouses for cocoa exchange in the Camden International Commodities Terminal, as a part of the increase they have seen in tonnage, Jones says.

Steel was the biggest part of that increase, of course. Steel processors have an advantage when locating near the port, Jones says. “Camden Yards Steel is a steel processor,” he explains, “They can take raw materials from storage here right to the factory. That reduces the cost of handling and re-handling materials.”

Holtec International, an energy technology company that is working to develop new nuclear power generation technology, has leased 50 acres from the SJPC with one of the largest tax credits —$260 million spanning 10 years, Jones says.

Holtec is building a Technology and Manufacturing facility in Broadway, and it will rely on the SJPC to handle its import and export cargo through the SJPC’s network of stevedores. 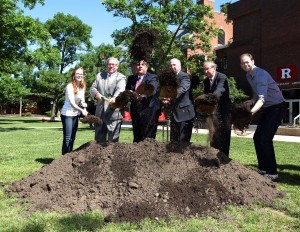 “New Jersey has more scientists and engineers per square mile than anywhere in the world,” Chrobak says. He says this may be due to the fact that “New Jersey is home to 63 colleges and universities.”

New Jersey is also home to the prestigious Princeton University, and has 11 universities that grant doctorates in STEM fields.

The ports in New Jersey employ many longshoreman, and in fact, in New Jersey, more people are employed in trade, transportation and utilities than any other nonfarm category that the Bureau of Labor Statistics measures. The SJPC specializes in break bulk cargo handling, which Jones says is usually very labor-intensive, so they help employ many workers. 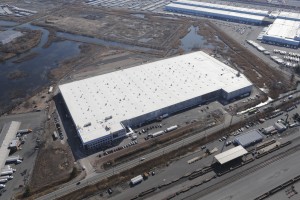 A distribution center in central New Jersey can serve 130 million consumers with same-day deliveries, Chrobak says. This is in addition to access to international waterways and Newark Liberty International Airport, which he says provides 105 international destinations and access to 90 U.S. cities every day.

The Port of New York and New Jersey is the third-largest port in North America; it will be able to serve post-Panamax ships by 2017, Chrobak asserts, after the Panama Canal expansion is completed.

The Army Corps of Engineers is working on deepening the Delaware River to 45 feet, Jones says, explaining that while those post-Panamax ships require a depth of at least 55 feet he predicts that larger ports, such as the Port of New York and New Jersey may wind up turning away smaller ships. If so, he says, they may come up the river to the South Jersey Port.

The SJPC purposefully looks for opportunities for companies to locate near the port or in the hinterland so companies can save on transporting their goods and raw materials back and forth to their ships, Jones says.

Public transit in New Jersey is particularly good, as Chrobak and Cappelli both attest. Trains and buses can bring commuters across the river from Philadelphia or all the way down from New York City.

Reaching those nearby cities so easily is a big bonus for living in New Jersey, Chrobak says.

“Education wise,” he says, “New Jersey schools are consistently rated top in the nation.” In 2014, they were rated No. 1 by WalletHub. The relatively high density of medical schools in the state makes for an excellent health care network, he says.

Camden is about an hour away from the Jersey Shore, Cappelli says. Chrobak adds that the state has 39 state parks and beaches all together.

“New Jersey has a rich multicultural environment that’s diverse and second to none,” Chrobak says. He also notes that MetLife Stadium, shared home of the NFL’s New York Giants and New York Jets, is located in East Rutherford.