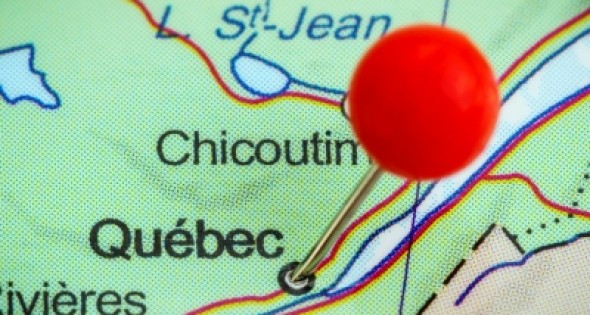 Québec: Rolling out the Recognition Carpet

Québec doesn’t get its fair share of notice by decision makers, according to economic development officials. One way they have sought to fix this perception issue is by making it easier to do business in the province, and making sure that their chief North American trading partner knows about it — while digging up other trading partners around the world.
So they created Invest Québec, which is part investment agency and part financial institution. The goal of this arrangement is to help streamline business development, and become a one-stop shop for clients that are expanding in Québec.
The organization offers financial tools for those businesses, participates in loan guarantees and helps manage government programs. “It’s quite unique in the world of economic investment to have such an animal combining economic development and financing under one roof,” says Chantal Malo, senior vice president of international affairs for Invest Québec.
The organization has a presence in China, and a Chinese company has located in the province, working in the mining sector. Canada is one of the largest mining nations in the world producing more than 60 minerals and metals.

Canada has one of the largest mining supply sectors globally with more than 3,400 companies supplying engineering, geotechnical, environmental, financial and other services to mining operations. “But we are expanding other sectors because we see that there is other private enterprise in China that is very successful, such as life sciences and electronics, that have been growing and are now able to envision foreign investment,” Malo says. “Those are the companies that we are now targeting.”
Invest Québec is also seeking to develop high tech companies, where they have already had some success in attracting innovative businesses, Malo says. “We have, over the last three to four years, had a real visual effects industry in Montréal.”
In life sciences, Invest Québec is welcoming the first investment of Japan’s Mitsubishi Tanabe Pharma Corp., which is now in a joint venture with the $357 million acquisition of Medicago Inc., the Québec-based biopharmaceutical company doing work in the vaccine business.
There were more than $2 billion in foreign investments in 2014, Malo says. “That is a good result. But I think we can do more.”
Canada is negotiating an ambitious free trade deal known as the Trans-Pacific Partnership (TPP) with 11 other countries in Asia-Pacific and the Americas. The 12 countries currently negotiating the TPP, including Australia, Japan, New Zealand, the United States, Mexico and Vietnam, make up a market of close to 800 million consumers and account for 38 percent of the world’s GDP. Signing an agreement with those countries would give Canada the chance to strengthen its traditional partnerships in the Americas, while tapping into a huge market and gaining a stronger foothold in a region that has become increasingly integrated into the world economy.

Down To Business
*Approximately 380,000 people across Canada work in the mining and mineral processing industries.

*Mining contributed $54 billion to Canada’s GDP in 2013. The industry accounted for 19.6 percent of the value of Canadian goods exports in 2013.

*Nearly half of the Canadian biopharmaceutical industry and most of the basic and clinical research activities are concentrated in Québec.

Industries and Innovations
Major visual effects players such as Oakland-based Atomic Fiction recently came to Montréal to take advantage of all of the research and development credits, along with the quality of labor, Malo says. “There has been a lot of success in this sector because it’s new. We didn’t have that much visual effects activity in Montréal,” she says.
Other visual effects companies include Technicolor, Gameloft, Warner Bros., Moving Picture Co. (MPC), Cinesite VFX, Ubisoft Entertainment, and Framestore. Greater Montréal today is considered an international hub for the digital entertainment industry. 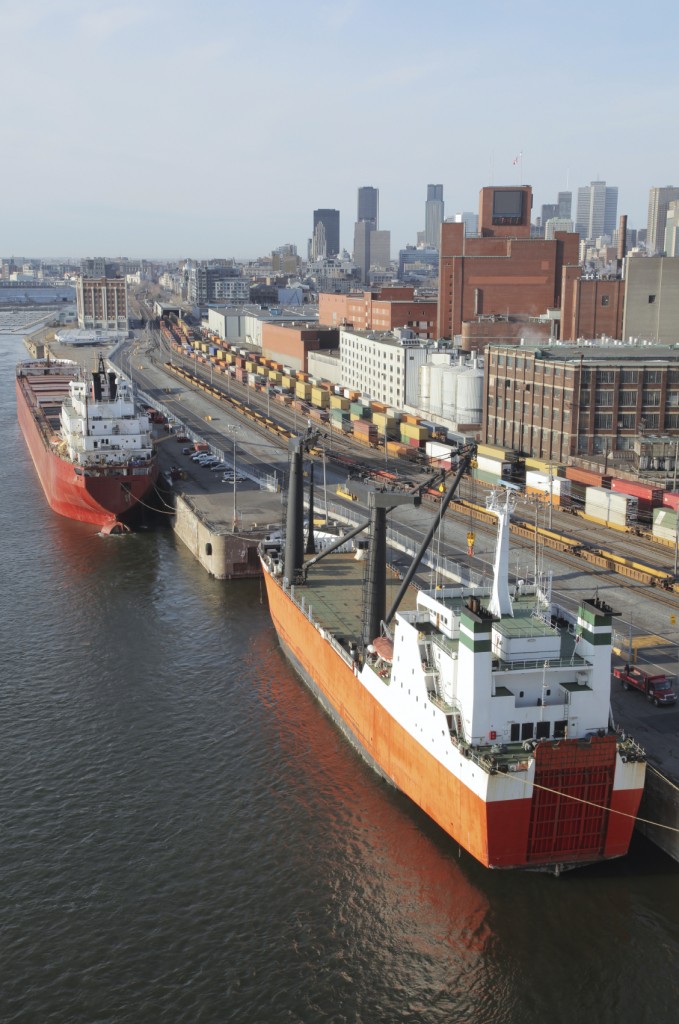 The Montréal Port Authority (MPA) welcomes the Québec government’s announcement in late June of the first ever Québec Maritime Strategy, which is a commitment to support the marine industry with more than $1.5 billion in investments. Photo: Invest Quebec

Says Christian Bernard, chief economist for Montréal International, greater Montréal’s visual effects industry has seen 24 percent annual job growth following a 2009 tax credit increase. Greater Montréal’s video games industry has seen 648 percent job growth between 2002 and 2012.
Another growing industry is aerospace. Guardian Aerospace is a charter, flight training and authorized maintenance organization, representing some of the handful of aerospace companies in Québec, including prime contractors such as Bombardier Aerospace, Bell Helicopter, Pratt & Whitney Canada; and 15 OEM integrators such as General Electric Aviation Canada, MDA Satellite Systems and Rolls-Royce Canada. “There is a high percentage of aerospace production in Québec,” Malo says. “It’s an important hub for that.”
There are also rare earth projects being looked at, some of just a few that are outside of China (China now provides up to 97 percent of the world’s rare earth resources). In a report on mining by the Mining Association of Canada, government officials identified 11 Canadian rare earth projects in the advanced exploration stage, all of which are Canadian owned. The parliamentary committee estimated that total capital expenditures required for these mines vary significantly — from $106 million to $2.5 billion.
The report notes five projects targeting production within the next five years, including Avalon Rare Metals’ Nechalacho project in the Northwest Territories; Quest Rare Minerals’ Strange Lake project and Matamec’s Zeus-Kipawa joint venture in Québec; Pele Mountain Resources’ Eco Ridge project in Ontario; and Orbite Aluminae’s Grande-Vallée property in Québec.

Talent and Education
There are more than 30 public colleges in the province, 28 subsidized private colleges, (including the College International des Marcellines), and 30 other colleges under license in the province (including the National Theatre School of Canada in Montréal).
Canada spends about 5.4 percent of its GDP on education, according to the World Bank. The country invests heavily in tertiary education — more than $20,000 per student, according to a report from the Organisation for Economic Cooperation and Development (OECD).
A recent announcement from the Canadian Minister of Citizenship and Immigration, Chris Alexander, stated that Canada is introducing a new, fast-track system to let foreign students and graduates with Canadian work experience become permanent eligible residents in Canada.
Assets
Malo says that there are some major government priorities to attract foreign investment, with a lot of investment in infrastructure coming to support the mining business. The country is ready to spend $1 billion over a five year period on developing infrastructure for mining, a key driver of economic development in the country’s territories.
Malo says that Québec wants to build an industry around the ports on the St. Lawrence Seaway to make sure that companies take advantage of the seaway and “improve their logistics and supply chains of their operations.”
The Québec government expects to spend $1.5 billion in the next five years on surface and maritime transportation infrastructure, with $200 million to be used to accelerate investment in commercial port infrastructure in the province. The investment is also expected to help create 30,000 jobs by 2030.
The airport’s capital investment program for the 2013-2017 period totals $1 billion. Many improvements are under way with the aim of adapting the capacity of airport facilities to demand that is growing by an average of 2 percent to 3 percent annually over the long term, according to Bernard. Air Canada and Air China have announced an agreement for direct flights between Beijing and Montréal three times a week starting in September.

Outdoors and Recreation
Montmorency Falls Park is just a few minutes from Québec City. The waterfalls are 272 feet tall, 99 feet higher than Niagara Falls. Visitors can admire the view from the cable car, suspended bridge, stairs climbing up the side of the cliff or the many lookout points throughout the site. Three via ferrata routes are located near the falls, one of which includes a 394-foot zip line.

Lifestyle
Living and working in the province is a mix of urban and suburban lifestyles. Québec City is the second largest economic hub in the province of Québec and the seventh largest in Canada. Since 2000, almost 66,100 jobs have been created there. Québec City’s economy is thriving, while a number of sectors are looking to hire workers.
The province features moderate cost of living prices, and some of the lowest prices for a home — around $230,000.
French is the official language of Québec. The French spoken in Québec has a number of unique features and expressions, as well as a number of local and regional variations. Since Québec is geographically surrounded by English-speaking areas, English is very present, although French remains the language of instruction in the public school system and the normal day-to-day language of work, postsecondary education, communications, trade and business.
Malo says that the opportunities to take advantage of what Québec has to offer just “have to get out there.” Québec is not the first Canadian province that many businesses think about when locating to relocate or expand. “What we have started to do is work closely with site locators in the United States looking to expand in North America and make sure that the potential of Québec is well presented and well understood by them in order to place the province in the minds of the large corporations that are thinking of expanding,” she says.