Canada, the United States’ neighboring economic ally and steadfast trading partner has weathered the economic storm of recent years, but is still looking for better economic growth, in part by ratcheting up exports and making sure that manufacturing has all the economic tools it needs to make the comeback that Canadians expect.
The Canadian economy grew moderately in 2014, says Marie-Christine Bernard, associate director of provincial forecast for the Conference Board of Canada, and continued at a good pace until the end of 2014 when there was a significant decline in oil prices. “That is affecting the outlook this year for Canada,” she says.
Economic forecasters saw a weak first quarter of 2015, with a lot of that weakness due to the drop in oil prices that affected the drilling sector and capital expenditures on major projects in the energy sector, Bernard says. 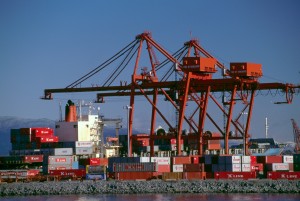 Activity underway at the Port of Vancouver in British Columbia. The transportation system employs more than 11 million people in Canada and the United States and is responsible on a yearly basis for the movement of more than 11.1 billion tons of freight, valued at more than $7 trillion. More than $1.6 billion worth of goods cross daily between both countries. Photo courtesy of the Government of Canada

Economists saw the fallout from this weakness when the Canadian dollar depreciated vis- á-vis the American dollar. “We thought that depreciation would stimulate exports out of Canada into the U.S. But that didn’t really happen,” Bernard says.
Additionally, they didn’t benefit from any significant economic action in the United States because the U.S. economy was affected by weather issues in the first quarter of 2015. “But we are seeing very strong job creation in the U.S. economy now,” Bernard says. “So we are expecting stronger growth in the U.S. for the second half of 2015, and then hope that helps pick up economic activity for Canada.”
The country actually has two provinces in recession now —Alberta and Newfoundland and Labrador. The country continues to overcome the economic obstacles in its way from economic events of 10 years ago.
This fall, an election is expected to create some wiggle room for economic adjustment, and the government has announced some tax cuts and other fiscal measures that will provide more disposable income. “So we should see the economy benefit from that as people spend this extra income,” Bernard says.
Even though two provinces are in recession, there is no country-wide recession in Canada. “While the weakness in the energy sector is cyclical, we will eventually see prices adjust,” Bernard says. “There is a lot of oil on the market right now, but as we see less oil production it means less exploration. Eventually oil prices will rebound and the energy sector will be a contributing factor to the Canadian economy once again.”
Bernard says that manufacturing as an industry is down, which Bernard attributed to retooling and maintenance in the auto industry that impeded auto production in the first quarter of 2015. “Auto production should be rebounding. It was just retooling for new models. But we haven’t seen a rebound yet so far this year.”
Recent ups and downs in the European markets affect Canada as well, even though they don’t do a lot of trade with Europe, Bernard says. “What is going on in Europe affects business confidence and consumer confidence. So that can impact the Canadian economy.”

Brampton, Ontario: Vibrant and Diverse Economy
By David Hodes
Sohail Saeed, the director of economic development and tourism for Brampton, Ontario, says that the since the end of NASA’s shuttle program, the city has become a magnet for scientists involved in various high-tech specializations. In the case of Brampton, a robotic suturing device, one of the more unique new developments in the area, is made by MDA Robotics and Automation, the same company that made the Canadarm space arm for the U.S. space shuttle.
And because Brampton is growing so fast — the ninth largest city in the country and the fastest growing with more than 20,000 new residents in the past year — services and retail developments are picking up. “People are lining up for that in economic development,” Saeed says. “We don’t even have to chase those services. They are coming in on their own.”
There is also a new wellness center set to go. The 350,000-square-foot Peel Memorial Centre for Integrated Health and Wellness is a half-billion-dollar project is expected to be ready next year. “What that wellness center will do is take away treatments of kidney dialysis and things like that from the bigger hospitals and focus on continued patient care.
“With our new mayor and new city council, we are developing the area as a biomedical and life sciences hub,” Saeed continues, citing Medtronics headquarters as an example. “Any business that is related to life sciences in any shape or form, this is the time to join in the eco system here.”
Learn more by visiting www.peoplepoweredeconomy.ca.

The sluggish economy is just a passing symptom, says Jean-Philippe Linteau, senior trade commissioner for the Canadian government’s trade commissioner service. “Economic cycles come and go,” he says. “But when you look at the period of time from 2005 through 2014, Canada has led the Group of 7 [G7] countries in economic growth. So when you look at the long term, Canada has grown more than the U.S., Germany, France, Italy, Japan and the United Kingdom. And we have one of the soundest banking systems in the world, where the top five Canadian banks are listed as the strongest in North America, according to the World Economic Forum.”
That, and the fact that the whole country is a tariff free trade zone, demonstrates the sound economic fundamentals of the country, Linteau says.

Industries and Innovations
Bernard says that the financial sector is doing quite well in Ontario. “That usually provides some stability when we don’t see a lot of growth in the goods producing industries.”
That growth is led by Royal Bank of Canada, the largest bank in the country; Desjardins Group, the largest financial institution in Québec; National Bank Financial, the eighth-largest employer in Québec; and the Bank of Nova Scotia.
But trade is one of the most significant economic engines of the country. A growing trade target is now China, as well as other countries in Asia, especially through Canadian provinces on the West Coast, such as British Columbia. “These are provinces that produce a lot of commodities that are trading with China more than other provinces,” Bernard says.
The country has signed seven new free trade agreements, most recently with South Korea, for a total of 11 trade agreements now in force with different trading partners. South Korea brought Green Cross Biotherapeutics Inc. to the Technoparc Montréal on the Saint-Laurent campus recently, and is in the early stages of building a $315 million biopharmaceutical North American headquarters facility there, the first project that came about as a direct result of the Canada-Korean Free Trade Agreement.

Talent and Education
“When we talk about business, we talk about the well-educated workforce,” Linteau says. “That is really the key differentiator that we have.” Education is compulsory in most provinces of Canada up until age 16 or 18, depending on the province.
More than half of the country’s working age population ages 25 to 64, has had a tertiary level (college or graduate school) of education. “That is much higher than the U.S. and it is a key building block,” Linteau says.
But just as with any country where manufacturing is a top economic force, Bernard says Canada is experiencing the beginning of the rush of baby boomers exiting the labor market. “Baby boomers have reached the age of 65 and some of them will constrain growth in Canada going forward,” she says.

Ajax, Ontario Welcomes the World
By David Hodes
“The Mexican softball team just landed and is on the practice field,” says Lisa Hausz, manager of business development and marketing for the town of Ajax, talking about the excitement of the Pan American Games, the world’s third-largest international multisport games. Participants were in town early July for games that took place from July 10th through 26th. “Our fields are amazing, built to international level softball, and the town is very excited about this event,” Hausz says.
Officials in Ajax have been working on landing the games in the town for approximately five years, but weren’t sure if they had what the games were looking for. “We weren’t thinking that our fields were at international level,” she says. “But with our proximity to Toronto, it was easy to get teams and visitors to the area.”
Ajax city managers expected 125,000 visitors over the course of the games, which would literally double the number of people in the city. “Nothing like this has ever happened to our city before,” Hausz says. “And actually, for Ontario, this is the largest international multisport event ever. It’s a big undertaking and we have been planning for quite a while. We are just excited to welcome the world.”
In other developments, plans are underway to accelerate development in downtown Ajax. For example, a vacant parcel of land at the southwest corner of Harwood Avenue and Bayly Street will soon become a landmark site that acts as a gateway to the downtown. Medallion Developments Ltd. is proposing to build a high quality, mixed-use project over the next 10 years to 15 years. The development will contain 1,838 residential units in six buildings as well as 72,000 square feet of office and retail space.
For complete details, visit www.ajax.ca.

Assets
Canada relies on good infrastructure for the success of their trade objectives, with more than 100 commercial ports in the binational Great Lakes and St. Lawrence Seaway transportation system.
Linetau says the initiative, the Beyond the Border Action Plan, helps facilitate the movement of more cargo at the U.S.-Canadian border. One of the public/private partnership projects under the initiative, Linetau says, is the new bridge that is being built between Windsor, Ontario, and Detroit. “Detroit is the busiest border crossing of any border anywhere in the world. Something like a billion dollars of merchandise crosses there every day.”
Canada is moving forward with a new bridge, called the Gordie Howe International Bridge, which will connect Highway 401 in Ontario with Interstate 75 in Michigan. It is expected to be complete in 2020.

Lifestyle
The Canadian lifestyle is a mix of many rural towns and a few larger urban areas.
Canada’s health care is publicly (taxpayer) funded: payment is generally not required for medical treatment.
The country’s largest cities include Toronto, with 6 million people, followed by Montréal, Vancouver and Calgary. Housing prices can range from $500,000 in Toronto to $250,000 in Winnipeg, Alberta. Toronto has the highest cost of living of all Canadian cities; however, it is still very low compared to other countries.